The tale of Valaida Snow is dramatic, a beautiful gifted entertainer, singer, dancer, arranger, and jazz trumpeter who succeeded against all odds. Valaida’s exceptional talent, determination and charm brought her international fame. Her talents nearly unlimited, a savvy business woman who spoke seven languages, she blew hot jazz trumpet in the style of Louis Armstrong. Billed as “Queen of the Trumpet” she appeared in some of the top theatrical productions of her day. The toast of Paris and London in the early 1930s she wrote and recorded her theme song, “High Hat, Trumpet and Rhythm.” Valaida Snow’s life is an inspiring tale of determination and spirit

Valaida Snow was born into a family of musicians: Her mother taught Valaida, her sisters Alvaida and Hattie, and her brother, Arthur Bush, how to play multiple instruments. Valaida and all her siblings became professional musicians. Valaida was taught by her mother to play cello, bass, violin, banjo, mandolin, harp, accordion, clarinet, saxophone and trumpet. It was natural for Valaida to be an entertainer: at the young age of fifteen, she was already a recognized professional singer and trumpet player. While Valaida Snow's beauty attracted audiences, it was her incredible talent as a jazz trumpeter which truly captivated them. She obtained the nickname, "Little Louis" due to her Louis Armstrong-like playing style. Pianist Mary Lou Williams wrote about her: "She was hitting those high C's just like Louis. She would have been a great trumpet player if she had dropped the singing and dancing, and concentrated on the trumpet".

Valaida toured and recorded frequently in the United States, Europe and the Far East both with her own bands and other leaders' bands. During the years 1930 through 1950 Alvaida could be seen with various jazz greats: With her sister, Lavaida, a singer, she performed in the Far East with drummer Jack Carter's jazz octet. She took part in a session with Earl Hines in New York in 1933 and also performed with Count Basie, Teddy Weatheford, Willie Lewis and Fletcher Henderson at various places and times.

As an actress, she debuted on Broadway in 1942 as Mandy in Eubie Blake and Noble Sissles's musical ‘Chocolate Dandies.’ Later, she appeared on Broadway in Ethel Waters' show, ‘Rhapsody in Black’ in 1934; she appeared in the London production of ‘Blackbirds’ in 1935 with Johnny Claes and also in its Paris production. She could be seen in ‘Liza’ across Europe and Russia in the 30's and was also in the Hollywood films ‘Take It from Me’ in 1937, ‘Irresistible You,’ ‘L'Alibi’ and ‘Pieges’ in 1939 with her husband Ananais Berry. Valaida Snow shocked people in the USA, with her eccentric behavior. She traveled in an orchid colored Mercedes, dressed in an orchid suit, her pet monkey rigged out in an orchid jacket and cap, with the chauffeur in orchid as well.

In early 1950 she records for the Derby label with the Jimmy Mundy Orchestra. The result is "Tell Me How Long The Train's Been Gone" and "When A Woman Loves A Man". The record does nicely in certain areas, especially Philadelphia and St. Louis. The Derby release is her first real effort since her tragic imprisonment and it does well. Valaida Snow embarks on a tour of the Northeast and is a particular favorite at the Monte Carlo in Pittsburgh. In the fall she is at the 845 Club in New York and is held over. In a bit of a surprise she leaves Derby Records and signs with Apollo Records late in the year.

In February of 1951 she records "Porgy" and "The More I Know About Love" for Apollo with the Bobby Smith Orchestra. She continues her many in person appearances throughout the country, and in early 1952 embarks on a true R & B tour with Joe Liggins & His Honeydrippers up and down the West coast. Her records are sporadic, and after a well attended stay at Chicago's Crown Propeller Lounge in late 1953, Valaida signs on with that city's Chess label. "I Ain't Gonna Tell" and "If You Mean It" are released by Chess. The next two years are spent mostly appearing in the musical revues that have always been the first love of Valaida Snow. A revival of "Blackbirds" is her main show and she continues to get good reviews for her performance.

It is just at this time that the final curtain descends on her, as in June of 1956 Valaida Snow dies of a cerebral hemorrhage backstage at the Palace Theater in New York. She passed away doing what she loved most, entertaining the public with her great talents. She lived an intense life and enjoyed it, even if she bore the trouble and the tragic side that haunt many greats. She made the front page news for her glorious endeavors as well as for her downfalls. It is a continuing shame that so many people remain unaware of this extraordinary woman.

Swing Is The Thing 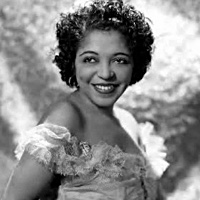 All About Jazz musician pages are maintained by musicians, publicists and trusted members like you. Interested? Tell us why you would like to improve the Valaida Snow musician page.