“ if you are at the end of your journey,weary, worn and nothing seems the same you’re not alone my love’s eternal,Remember my name.”

So it is with these lyrics, we recognize Alberta Hunter, a jazz and blues singer from the early days of the jazz age. She has been inducted into the Big Band and Jazz Hall of Fame. She was a prolific performing and recording artist of the 20’s and ‘30’s having cut sides with legends of the era as Fats Waller, Fletcher Henderson, Eubie Blake, Louis Armstrong, Lil Hardin, and Duke Ellington. In 1977, after an extended layoff she triumphantly reemerged on the music scene at the age of eighty two, returning to the stage and studio. A true jazz pioneer, survivor, and admirable example of class, let us remember her name.

Alberta Hunter left her hometown of Memphis just shy of her twelfth birthday, and went to Chicago to become a blues singer. She lived with a family friend, worked odd jobs, and became a cook. By 1911, she landed a singing job in Chicago’s tough South Side, at a bordello named Dago Franks. She learned the blues first hand from living the life, learning from the ground floor the meaning of the blues. She stayed on at Dago Franks until 1913, moving on to other clubs as the Elite Café, where she teamed up with New Orleans piano professor Tony Jackson, who helped her to expand her repertoire and develop her style. As luck would have it she landed a singing gig at the Dreamland Café., where the house band at the time was King Oliver’s Creole Jazz Band. She became good friends with the bands pianist Lil Hardin, who was also from Memphis, and also with many other musicians from New Orleans as Louis Armstrong and Sidney Bechet who were coming to Chicago to dig the blossoming jazz scene. She stayed on at the Dreamland for five years, and then moved to New York in 1921. It would be in New York in 1921, that she would begin her recording career. She started there as singer for Fletcher Henderson and his Novelty Orchestra, and recorded for the Black Swan label. In1922, she started her recordings with Paramount, accompanied by Henderson on piano. She would go on to have an incredible run of recordings at Paramount, on which she built her reputation and career.

Alberta Hunter always wrote a lot of her own material, and her songs were covered by other artist. In 1923 she wrote “Down Hearted Blues”, that was the first hit for blues singer Bessie Smith. In the same year she replaced Bessie in the hit musical revue “How Come?” and caused a sensation. Also in 1923 she became the first black singer to be backed by a white band when she recorded with the Original Memphis Five. In 1924 she sang on the famous Red Onions Jazz Babies sessions, this session is where Louis Armstrong and Sidney Bechet first recorded together. She would go on to record under her own name at Paramount, Okeh, Victor, and Bluebird, and use pseudonyms at Gennett and Biltmore. She traveled to Europe in 1927, working in musical revues, where she became a star. She would stay in Europe for many years, traveling and touring extensively. During World War II she joined the USO and spent the entire war years in Europe, Asia, and the South Pacific entertaining the troops.

With the end of World War II she returned back to the states and continued to sing and also care for her mother. She again joined the USO during the Korean War. She retired from singing in 1956. She enrolled in a nursing program in 1957 and worked as a registered nurse at Goldwater Hospital, on Welfare Island in New York. She remained there until they forced her to retire in 1977.

As if by destiny’s call, in 1977 Miss Hunter resumed her singing by performing at a private party given by Bobby Short. She was asked to sing at The Cookery in NYC, where she held court and was again the toast of the town. BRAVO!!!

She wrote fresh songs for the soundtrack of the movie “Remember My Name”, (Columbia 1978) which was a success, as was the record. This led to three more albums for Columbia, including the very popular “Amtrak Blues”.

Alberta Hunter continued to perform right up until her death on Oct. 17, 1984.

For Eileen Toler, who turned me on to Alberta.

Alberta Hunter's "Downhearted Blues: Live at the Cookery"; Coming On...

Look For The Silver...

The Glory Of Alberta... 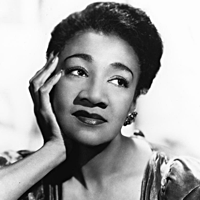 All About Jazz musician pages are maintained by musicians, publicists and trusted members like you. Interested? Tell us why you would like to improve the Mamie Smith musician page.