Willie Mae Thornton, known popularly as “Big Mama,” was not only a successful singer/songwriter in her own time, but a major influential voice in the development of American popular music with her original version of “Hound Dog.”

She herself was influenced by the famous blues singers of the 1920s and 1930s like Bessie Smith, Memphis Minnie, and Ma Rainey. She was a popular performer famous for exuberant shows. “Her booming voice, sometimes 200-pound frame, and exuberant stage manner had audiences stomping their feet and shouting encouragement in R&B theaters from coast to coast from the early 1950s on,” according to the Encyclopedia of Pop Rock & Soul. She received no formal training, either for voice, or for the instruments she played, like the harmonica and the drums. She was a true musician and was able to watch others play and then try things out until she got them right.

Born December 11, 1926 in the country outside Montgomery, Alabama, Thornton was one of seven children of a minister. She began her music career singing alongside her mother in her father's church choir and also playing harmonica, an instrument she picked up at a very early age, in small shows around the countryside. When, in 1940, her mother died Thornton was forced to go out and work. Only 14 years old, she took a job scrubbing floors at a local saloon and it was there that she had her first opportunity to sing in public when the regular singer suddenly quit her job one night leaving the place with no entertainment. After her first successful attempt at singing in public, Thornton entered a small talent show in which she won first prize, and it was there that she came to the attention of Sammy Green. Green asked her to join his Hot Harlem Review and Thornton was soon after seen touring with the vaudeville troupe, dancing and singing across the South.

In 1948 she stopped touring and settled in Houston, Texas having signed a five-year contract with Don Robey to be his nightclub singer, singing with Louis Jordan's band. There she met such famous musicians as Junior Parker, Lightning Hopkins, Lowell Fulson, and Gatemouth Brown. They all helped influence her building style, and it was while living in Houston that Thornton released her first recording under the name Harlem Stars. Brought more firmly into the blues world by this release, she was signed onto the Peacock label, which had her heading to Los Angles to perform with Johnny Otis, the famous bandleader.

She toured with Johnny Otis's Rhythm and Blues Caravan throughout the early 1950s. In 1952 they went to New York to perform at the Apollo, it was while there that Big Mama got her nickname, given to her after the first performance because she was six feet tall, was rather large, and had an immense, earthy voice. The name stuck. At the same time she was touring she recorded around thirty songs of her own.

In 1953 she recorded “Hound Dog,” the song later made famous by Elvis Presley. Johnny Otis, asked Jerry Lieber and Mike Stoller to write a song specifically for Thornton and that song was “Hound Dog.” It quickly went up the R&B charts to number one and was the song that made Thornton a big star. Three years later Elvis Presley recorded the song and it became an enormous hit for him. Thornton, in the meantime, always thought she'd never received the credit she should have for the song. Although written by Lieber and Stoller, it was her additions to the song that made it the hit it is today but she received only one check for $500 for the song and never saw another penny that the popular song pulled in.

After the release of “Hound Dog” in 1952, Thornton went on tour with some of her old friends, first with Junior Parker and Johnny Ace from 1953 to 1954, and then with Gatemouth Brown in 1956. After her tours finished she moved to Los Angeles and started playing harmonica and drums in some of the local clubs as the popularity of blues began to decline. In 1961 Thornton was brought into the limelight again with her release of the song “Ball and Chain.”

Although she struggled a bit professionally during her life, Thornton was well received at such festivals as the Monterey Jazz Festival, the Newport Folk Festival, and the Ann Arbor Blues Festival. She also toured Europe with the American Folk Blues Festival in 1964. When she returned she signed a contract with the Arhoolie label in 1965, with whom she stayed until the 1980s. It was while with Arhoolie that she did some of her best work as “Big Mama Thornton in Europe,” (1966) and “Big Mama Thornton with the Chicago Blues Band.” (1967) Her fortunes received a boost when Janis Joplin recorded a cover of her song “Ball and Chain.” She continued to tour and would often headline blues festivals, she also began to record again and made two albums for Mercury Records.

In 1979 she took part in the San Francisco Blues Festival, despite poor health, and gave there what critics called the performance of a lifetime. To recognize her contributions to the blues music scene, Thornton was awarded the San Francisco Blues Festival Award. Thornton appeared on many television shows throughout her life, and in 1980 she was seen onstage at the Newport Jazz Festival in a program “Blues Is a Woman” alongside other veteran female singers.

Thornton was known to be a heavy drinker and her notorious hard living finally took its toll in the 1970s and the 1980s, but Thornton performed in her lively fashion almost to the end. Even after a serious car accident in 1981 for which she required major surgery, she performed at a cabaret in Pasadena, California though she was unable to walk or stand during the performance. She died on July 25, 1984 in a boarding house in Los Angeles, California of a heart attack and complications from cirrhosis of the liver.

After a lifetime of performing, Thornton was inducted into the Blue's Foundations Hall of Fame in 1984.

In the year 2000 Thornton was remembered in a dance show called “Sweet Willie Mae.” Andrea E. Woods, who was the choreographer of the show, wanted to celebrate the freedom she found in Thornton's music. Thornton was also part of an exhibit at the Woman's Museum in Dallas, her recording of “Hound Dog” playing continuously in a room dedicated to female musicians. Also, the Fund for Women Artists website has a page dedicated to The Big Mama Thornton Project. These are high honors for a woman who died penniless and alone, and ones that will most likely be repeated as more and more people discover a woman who helped make Blues and R&B the popular forms of music they are today. 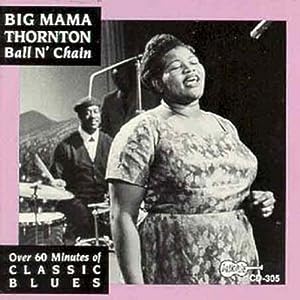 All About Jazz musician pages are maintained by musicians, publicists and trusted members like you. Interested? Tell us why you would like to improve the Big Mama Thornton musician page.