“Empress of the Blues”

She embodied the meaning of the blues, living the life she sang about. Bessie Smith set the standard for blues singers on how it should be done.

Bessie Smith, born on Apr. 15, 1894, in Chattanooga, Tennessee, was one of ten children. Her parents died by her eighth birthday, and she was raised by her older sister Viola. She was taught to sing and dance by her older brother Clarence, who later arranged an audition for Smith with the traveling Moses Stokes Show where she was hired as a dancer in 1912. She became friends with Gertrude “Ma” Rainey, a blues singer, who became her mentor. Bessie was quick to learn the profession, and by 1915 struck out own her own, singing in a vaudeville circuit and started establishing a reputation in the south and on the east coast.

By 1920 she had become quite the star, and continued to work the crowds, blending a touch of comedy, sense of drama, with a down home sense of delivery from her powerful voice. Her popularity led to the inevitable recording contract, and on February 16, 1923, she recorded “Gulf Coast Blues” and “Down Hearted Blues,” for Columbia accompanied by Clarence Williams on piano. Written and recorded by Memphis singer Alberta Hunter a year before, Bessie’s version of “Down Hearted Blues” sold more than 750,000 copies in six months, and made her a star.

She continued to record almost exclusively for Columbia, was the labels biggest star, recording over 150 songs between 1923 and1931, with constantly high sales figures. Bessie Smith’s live performances were equally successful; she toured incessantly, commanded fees of $2,000 a week and played sold out theaters across America, to both white and black audiences alike. She recorded with the best jazz sidemen, including pianists Fletcher Henderson and James P. Johnson, clarinetists Benny Goodman and Buster Bailey, guitarist Eddie Lang, saxophonists Coleman Hawkins and Don Redman, and the great Louis Armstrong. “St. Louis Blues” with Armstrong is a highlight in the recordings of the period, and considered one of the best renditions of the song. In May 1925, she made the first electronically recorded record, “Cake Walking Babies,” by singing into the newly invented microphone. Bessie’s songs have gone on to become blues standards and include “Backwater Blues”, “Nobody Knows You When You’re Down and Out”, Empty Bed Blues”, “Careless Love”, and the all time classic “Gimme a Pigfoot”. She had a starring role in the movie St. Louis Blues which came out in 1929. Her recordings are available as compilations under a variety of labels.

The Depression years of the 1930’s saw a decline in the record sales due to hard times, radio, and the new motion picture industry. Columbia dropped Bessie from the label in 1931. She returned to the recording studio briefly in 1933 under the production of John Hammond at Okeh. This session was released as “Bessie Smith accompanied by Buck and his Band”. Though no longer putting out records she was still very popular in the South, and continued to draw large crowds, though the money was not like it was in the past. Since the blues style of music was dying out, she was starting to reinvent herself in the mid ‘30’s as a swing singer and was on a comeback.

Bessie Smith died from injuries suffered in an automobile accident on Sept. 26, 1937, she was just 43 years old.

In her short tenure as the “Empress of the Blues”, she dominated the market, and defined the role of the blues singer. Her vocal talent, commitment to the music, innate sense of swing, blended with a raw feeling of what is the blues, is her enduring legend. 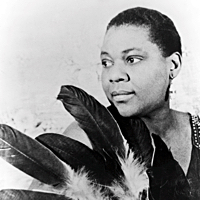 All About Jazz musician pages are maintained by musicians, publicists and trusted members like you. Interested? Tell us why you would like to improve the Bessie Smith musician page.