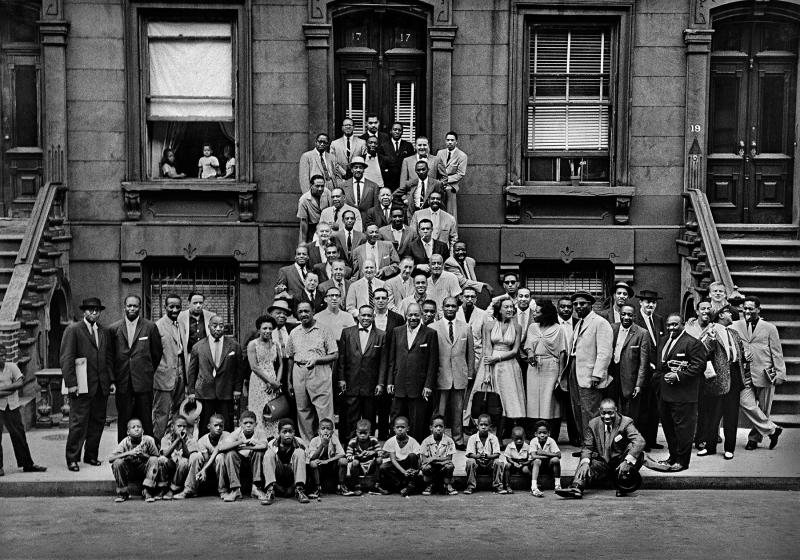 There's a bond, a sort of invisible bond between all musicians who play jazz. There is always that bond, it holds them together. —Hank Jones

This encore presentation from January 2009 celebrates Jean Bach, director of A Great Day in Harlem. Ms. Bach died on May 27th at her home in Manhattan. She was 94.

It is probably the most celebrated ensemble jazz portrait of all time. Fifty-seven of the greatest jazz musicians gathered together on the steps of a Harlem brownstone early one morning in August 1958—a living family tree of the history of jazz.

And yet, the absentees from photographer Art Kane's enduringly fascinating A Great Day in Harlem are notable. Not present were Louis Armstrong and Miles Davis, Duke Ellington and Bill Evans, John Coltrane, and Billie Holiday and Ella Fitzgerald. Charlie Parker had died three years earlier, Art Tatum two years earlier. All those absent giants of jazz, and others too numerous mention, are nonetheless felt somehow to be present—represented by musicians who played with them, and who inspired and were inspired by them. Like with any family reunion, its absent members are with us in spirit.

All About Jazz contacted some of the survivors of that day, some in the picture, others behind the scenes, and collected their memories of the shoot, their insights into the personalities involved, and their reflections on the era, to celebrate the fiftieth anniversary of the publication of the photograph in Esquire magazine.

There are many iconic photographs of individual jazz musicians, but no other better captures the spirit of the jazz family. And no other better represents the myriad roots and branches of a music which even fifty years ago—when the photograph appeared in the January 1959 edition of Esquire—was difficult to define. The music had already travelled a long way, and in many directions, since its birth.

That a men's magazine should devote a special to jazz was unusual, then as now. The idea was that of Esquire's features editor, Harold Hayes, a jazz enthusiast. Encouraged by graphic designer Robert Benton, he asked Art Kane, then a designer for Seventeen magazine, to brainstorm ideas for a picture.

It was Kane's idea to bring together as many musicians as possible on 126th street in uptown Harlem and photograph them. That Kane was not a photographer, did not own any equipment, and had never before taken a professional photograph, would prove not to be a problem.

That so many musicians turned up for the shoot was due in large part to the efforts of leading jazz writer Nat Hentoff. Hentoff explains: "At the time the editor of Esquire was a very bright guy named Harold Hayes, who knew a lot about jazz and cared about it. So he called me up and said 'Would you do us a favor and call a good number of the musicians, because they know you, and see if you can arrange for them to be there?' I think the time was something like ten or eleven o'clock and I did that, I called, I don't know, maybe thirty or more. And if I was in the clubs I would mention it, and often I got the response: 'Ten o'clock! In the morning?'

"But I think the thing is they liked the concept. The main kick was, and you could see it once you got there, and you could see it in the photograph—they liked being with each other. Since most of them were on the road a lot of the time they rarely had a chance to get together. That's what I used to like about some of the jazz festivals; guys who hadn't seen each other for a long time, getting together and trading stories. So that's how I got involved."

Notices were put up in all the jazz clubs, and at the Musician's Union Local 802 office, announcing that the photo shoot was scheduled for ten o'clock on the morning of August the 12th, 1958. Whether the timing was foolish or plain ambitious, is a moot point, but that as many as fifty-seven musicians did turn up may be down to the fact that sets ran on well into the wee hours. To make the shoot wasn't so much a question of getting up early, but staying up later.

Fifty years on, alluding to the nocturnal lifestyle of jazz musicians, Marian McPartland, one of the fifty-seven who did show, muses: "Maybe they didn't know there was more than one ten o'clock." Now ninety years of age, the remarkable McPartland is still active, presenting her weekly radio show "Piano Jazz," and in 2008 released a new trio album on the Concord label. Originally from Windsor, England, she married Jimmy McPartland during World War II and arrived in New York in 1946.

McParland's first job was playing at the Embers club and she later cemented a residency at the Hickory House, where she would play for ten years. She explains how she came to be in A Great Day In Harlem: "I was playing at the Hickory House and Nat Hentoff came by and told me there was going to be a photo shoot up in Harlem. If I wanted to be in it I had to be there at ten o'clock the following morning. I decided to go."

One of only three women there—the other two being singer Maxine Sullivan and pianist/arranger Mary Lou Williams)—McPartland is front row, and whilst nearly all eyes are on Art Kane's camera, McPartland is locked in conversation with Williams, whom she remembers fondly:

"I couldn't be happier about being next to Mary Lou Williams—we were chatting away and I had (bassist) Oscar Pettiford on the other side, who was one of my favorites. He used to come and sit in at the Hickory House all the time."

Pittsburgh-born Mary Williams was a female jazz pioneer, working as pianist and arranger for Andy Kirk's Clouds of Joy whilst just eighteen years old. Later she arranged for such figures as Benny Goodman, Earl Hines, Dizzy Gillespie and McPartland herself. She was also an influence on Thelonious Monk and Bud Powell. "Oh yes," says McPartland, "they used to go to her house a lot and I guess she taught them a great deal—they went there all the time."

McPartland has her own thoughts as to why some musicians failed to show that day: "Well, of course Miles (Davis) probably thought: 'Oh, to hell with that, I'm not going.' I'm sure he didn't care about that a bit. But I'm surprised that Duke (Ellington) didn't go because a lot of his band members were there, like Sonny Greer and several of the brass players."

One person who wasn't so sure about his place in the picture was drummer Eddie Locke: "What a wonderful day! What a great day!" Eddie Locke is not referring to that day fifty years ago, but to Barack Obama's election victory which coincided with this interview. "He's a decent person; I think he's going to help the whole world."

Back in 1958, Republican Dwight D. Eisenhower was President of the United States and Richard Nixon was vice-president. Less than three years previously, Rosa Parks had refused to give up her seat to a white passenger on a bus in Montgomery, Alabama. Only a year before Kane's picture, Eisenhower deployed the 101st Airborne Division to Little Rock, Arkansas to protect nine African-American children from the taunts, spitting and violence of white racists as they exercised their right to attend Little Rock Central High School. A black American president of the United States must have seemed like a distant dream back then, for as happily acknowledges: "Man, I couldn't have imagined it last year!"

Nor, as Locke explains, could he have imagined back in 1958 that he would go on to play with nearly all those assembled in the picture. "I really didn't belong in that picture at that time. At that time I hadn't played with nobody.

"I was there because of Jo Jones—he was my mentor, Papa Jo Jones. I met him when I first came to New York in '54 and I lived with him for two years. He was the one I learnt most from on the drums. I used to carry his drums, I was a gopher. I got coffee for him and all that kind of stuff. Papa Jo Jones was the drummer; he showed all those bebop drummers the way; all the drummers say the same thing about him. He changed the way the drum was played—the swing part.

"And this is how I happened to be there. He used to tell me: 'Meet me here,' and I was so in awe, and so afraid, that I never would ask him why. I was a respectful young man; you don't have kids that would do that now. He told me to meet me at this place; I didn't know where I was going. When I got there I knew who all those people were and I was in awe. I was just in awe. I knew who all those people were, and to get them all there at one time like that—unbelievable! I think everybody was surprised all those people turned up that morning, at that time, that early. Monk and all those guys like that? Even the magazine was surprised. It's an amazing picture."

Locke, now seventy eight, certainly earned the right to be in the picture over the years: "I played with almost everybody in that picture; Roy Eldridge, Coleman Hawkins, Henry 'Red' Allen, I played with all of them. Roy Eldridge was my greatest mentor—he taught me a lot about the drums. He was a drummer when he was young, not a lot of people know that.

"He taught me a lot about playing with people. I learned how to play with people. A lot of young guys today, they can play all that stuff, but they're not playing with people—for them it's all about technique. That's what I liked about Jo Jones, he didn't think that way—he was into swinging! (laughs) They never had another rhythm section like the one in Count Basie's orchestra.

"But at that time, all the people in that picture, man, they were big names in jazz, there were really a lot of innovators in that picture, they started stuff in jazz. You had all those drummers sitting up there like Sonny Greer and Gene Krupa, George Wettling, you know what I'm saying? Art Blakey..."

Locke touches upon one of the most amazing aspects of this photograph. Neither before nor since have so many innovators in jazz, and so many different schools of jazz, been brought together at one time—unless, as Dizzy Gillespie famously quipped, it was for a funeral.