Despite the fact that he was an important member of one of the most famous bands in the history of jazz, and during its finest period, drummer Sonny Greer has not been especially well served by jazz historians.

He was born William Alexander Greer on 13 December, probably in 1895, in Long Branch, New Jersey. It was in his home state that he made his first professional appearances but by 1919 he was playing in Washington, DC. It was there that he first encountered a local musician who was to change not only the drummer's life, but the lives of everyone who played in his band over the coming decades. This was Duke Ellington. In the early 1920s Greer and Ellington played often together in Washington and in New City. The drummer became one of Ellington's closest acquaintances, and was an integral part of the music the bandleader was creating. Greer was an original member of Duke's Washingtonians which was a five-piece group at its start. A subtle player, whose relaxed style sometimes drifted into casualness and poor timekeeping, Greer's style, especially when using brushes, was ideally suited to the band's seemingly effortless swing and he contributed much to the tonal palette that Ellington needed for in order to realize his compositions. The timekeeping lapses were underpinned in the early years by guitarist Freddie Guy and a little later on by bassist Jimmy Blanton but he played his own part in generating the easy, loping swing that the band generated.

Visually, Greer was flamboyant, surrounding himself with a spectacular array of gleaming percussion instruments, including bells, gongs, timpani and xylophone. For all the quantity of instruments, however, Greer's aural contribution was muted; he never thundered, preferring to add color to the Ellington band's sound and to supply a pulse that was felt rather than heard.

Only rarely during the 1930s and 1940s did Greer work outside the aegis of Ellington. Apart from a few small group sessions led by other band mates, and an appearance on one of Lionel Hampton's famous Victor recording sessions, his career was spent inside the Ellington orchestra. By the end of the 1940s, however, Greer raised the ire of Ellington, who tolerated more indiscretions from his sidemen than almost any fellow bandleaders of the era. Greer never shook off the smooth-talking, sharp-dressing, hard-drinking persona that had been a part of him, most of that persona was not detrimental to his playing, but the drinking was. Gradually, his on-stage behavior deteriorated and in 1951 Ellington was forced to ask him to leave the band.

Thereafter, Greer freelanced, recording with other Ellington alumni such as Johnny Hodges and Tyree Glenn and also with contemporaries like Henry 'Red' Allen and J.C. Higginbotham. In the late ‘60s and ‘70s Greer led his own groups, usually a trio, and he also appeared at concerts celebrating Ellington where he consistently proved that he was never more at ease than when playing his old boss's music. Despite the lifestyle he chose, he lived a long life, dying in New York on 23 March 1982.

For all his perceived failings as a drummer, in retrospect it is apparent that Greer was just right for Ellington for the era in which he occupied the drum chair. As the years passed other fine drummers came into Ellington's band, notably Louie Bellson and Sam Woodyard. While the latter was ideal for later Ellington, quite clearly Sonny Greer was the perfect drummer for early Ellington. With anyone else, the band would not have sounded the same and if it had not sounded the same then it would not have been what it was - the greatest jazz orchestra of its time. 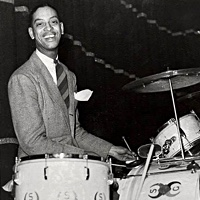 All About Jazz musician pages are maintained by musicians, publicists and trusted members like you. Interested? Tell us why you would like to improve the Sonny Greer musician page.