Jimmy Hamilton was for a quarter-century a mainstay of jazz's most important large ensemble, the Duke Ellington Orchestra. On clarinet, Hamilton was a model of polished, cool style and substance, while his less often featured work on tenor saxophone allowed him to reveal funkier inclinations.

Hamilton was hired by Ellington as the replacement for Barney Brigard in 1943, and he stayed on with the Duke until 1968. Prior to joining Ellington, he had worked with Lucky Millinder, Jimmy Mundy, and most noticeably Teddy Wilson's sextet (1940-1942) and Eddie Heywood; Hamilton also recorded “Gloomy Sunday” with Billie Holiday. While he was featured primarily as a clarinetist, where he employed a cool smooth tone, he sometimes turned to the tenor on which he was a little rougher and raucous.

When Jimmy took the job with Duke he actually had another offer on the table from Count Basie. Basie wanted him to perform only on tenor sax, however, and Jimmy wanted the chance to perform on clarinet, as well. Jimmy also commented that he was a great fan of Ellington's compositions and that Duke was sure to challenge him with new material. He was certainly right about that! Duke and Billy Strayhorn wrote many featured parts for Jimmy's clarinet and tenor sax improvisations (Air-conditioned Jungle, Deep Purple, and Bluebird of Delphi; to name a few).

After leaving Ellington, Hamilton moved to St. Croix in the Virgin Islands, where he taught music in public schools. Jimmy and his Quartet (with his wife, Vivian on piano) had a weekly radio show (WSTX AM radio station) from1971 to ‘77 which broadcast their Friday night gig, live from the Holger Danske Hotel in Christiansted, St. Croix. That broadcast made them fans all throughout the Caribbean. He did return to the U.S. to play with John Carter’s Clarinet Summit in 1981 and 1985, and gigged a bit in New York during 1989-1990, but was otherwise little heard from in his later years.

Hamilton did not record much as a leader, but did put together some fine sessions as his two sessions recorded two weeks apart in 1961 for Swingville (Prestige's mainstream offshoot), they spotlight Hamilton on both clarinet and tenor. “It's About Time!” offers a host of tuneful, loose blues, some of whose titles indicate the participants' collective sense of humor ("Stupid But Not Crazy," "Nits and Wits"), while “Can't Help Swinging” balances four bluesy originals with an equal number of top-notch standards. The sextet finds Hamilton joined on the front line by fellow distinguished Ellingtonians Clark Terry and Britt Woodman, and both dates are graced by Tommy Flanagan's piano.

Hamilton went on to do a live recording in 1985 from the Virgin Islands. This date “Rediscovered at the Buccaneer,” finds Hamilton playing clarinet and alto in prime form with a quartet also including pianist Gary Mayone, bassist Joe Straws and drummer Delroy Thomas. Hamilton performs five lazy love songs and five tunes associated with Duke Ellington. These would be his last recordings. 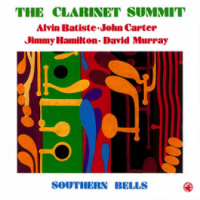 In A Sentimental Mood

All About Jazz musician pages are maintained by musicians, publicists and trusted members like you. Interested? Tell us why you would like to improve the Jimmy Hamilton musician page.