Buddy DeFranco has the unprecedented distinction of winning twenty Downbeat Magazine Awards, nine Metronome Magazine Awards, and sixteen Playboy All-Stars Awards as the number one jazz clarinetist in the world.

Buddy is generally credited with leading the way for jazz clarinetists from the exciting era of swing to the exhilarating age of bop. Along the way he has set the example for all jazz musicians for technical brilliance. Improvisational virtuosity and creative warmth. He is one of the most imaginative clarinetists playing today.

Born in Camden, New Jersey, Buddy was raised in South Philadelphia and began playing the clarinet at age nine. By age fourteen he had won a national Tommy Dorsey Swing contest, and appeared on the Saturday Night Swing Club, sharing the spotlight with Gene Krupa. He was soon discovered by Johnny “Scat” Davis and began his road career with him in 1939. He joined Gene Krupa in 1941, Ted FioRito and Charlie Barnet 1942-43, Tommy Dorsey 1944-45, Boyd Raeburn 1946, Tommy Dorsey again in 1947-48. In 1950 he joined the famous Count Basie Septet. Buddy was appointed leader of the Glenn Miller Orchestra 1966-1974. Since then he has resumed his jazz career and has done countless clinics: Tri-State Festival, Stan Kenton Clinics, North Texas State Teachers College, Clinician and Soloist with the N.O.R.A.D. Band and Air Men of Note. Buddy has brought his clarinet and jazz groups to many famous clubs. His concert appearances include Norman Granz's Jazz at the Philharmonic, Carnegie Hall, Hollywood Bowl, Ravinia Park with Tony Bennett, Sahara Hotel in Las Vegas, Kool Jazz Festival, Aurex Jazz Festival in Japan, Bern Festival in Switzerland, Radio Cologne with Bill Holman and the Radio Cologne Orchestra, Dutch Radio with Rob Pronk & Metropole Orchestra, European Tours, the Far East, Australia, New Zealand, Hawaii, South Africa, and Argentina ... wherever good jazz is played!

He has made both concert and recording appearances with such stars as Art Tatum, Tal Farlow, Billie Holiday, Nat King Cole, Charlie Parker, Dizzy Gillespie, Stan Getz, Lenny Tristano, Nelson Riddle, Billy Eckstine, Barney Kessel, Herb Ellis, Art Blakey, Mel Torme, Louis Bellson, Terry Gibbs, Oscar Peterson, as well as several Metronome All Star Sessions. He has appeared on the Steve Allen Show, the Jerry Lewis Telethon, the Pat Sajak Show, and Johnny Carson's Tonight Show. He was the featured soloist on the Stars of Jazz T.V. Show, had his own T.V. show, “The Buddy DeFranco Jazz Forum” for Public Television, and he and Terry Gibbs shared the spotlight on a segment of the P.B.S. series “Club Date”. Show less 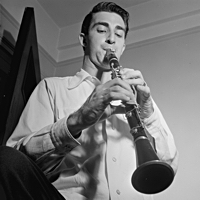 All About Jazz musician pages are maintained by musicians, publicists and trusted members like you. Interested? Tell us why you would like to improve the Buddy DeFranco musician page.