One of the world’s greatest drummers, Louie Bellson has been an exciting crowd pleaser for over 60 years. A well-respected educator and one of the nicest people in the music business, the still-active Louie Bellson is a class act.

Born Luigi Paolino Balassoni, Bellson won a nationwide Gene Krupa drum contest in 1940 and was heard by Tommy Dorsey, who was quite impressed. The drummer started at the top in 1941, playing with Benny Goodman; after serving in the military, he worked with the big bands of Goodman, Tommy Dorsey, and Harry James. His trademark was using two bass drums in his set. From the start, Bellson was able to construct fascinating solos that could hold one’s interest for as long as 15 minutes, yet he also enjoyed playing quietly with combos.

Performing regularly with Duke Ellington during 1951-1953 made Bellson world-famous and he also gained good reviews for his writing, which included “Skin Deep” and “The Hawk Talks.” After marrying Pearl Bailey, he left Ellington to work as his wife’s musical director but he also performed in many different settings, including with Jazz At The Philharmonic, Art Tatum, Oscar Peterson, the Dorsey Brothers Orchestra, Count Basie, and special projects with Ellington. In addition Bellson led his own big band and small groups, recording regularly as a leader.

Since the 1960s, Bellson has been involved in educational work, teaching young musicians his dynamic drumming technique. In the 1970s and 1980s, he could frequently be found on recordings from impresario Norman Granz's Pablo label, as well as the Concord label. He has published many of his scores, including his jazz ballet The Marriage Vows. For more than thirty years he has led big bands internationally, and continued to tour, often with a quintet.

Composer and author, he has written more than 1,000 compositions and more than a dozen books on drums and percussion. He received the prestigious American Jazz Masters Award from the National Endowment for the Arts in 1994. Also, he is a six-time Grammy nominee.

In 1998, Louie Bellson was hailed (along with Roy Haynes, Elvin Jones and Max Roach) as one of four "Living Legends of Music" when he received the American Drummers Achievement Award from the Zildjian Company.

Bellson holds four honorary doctorates, the latest from DePaul University in 2001. In 2003, a historical land-marker was dedicated at his July 6, 1924 birth house in Rock Falls, Illinois, thus inaugurating their annual 4-day celebration in his honor.

The 2006 CD release of "The Sacred Music of Louie Bellson and the Jazz Ballet" amply showcased his mastery and breadth as both composer and performer. This "magnum opus" is well attested to by the highest accolades of colleagues Tony Bennett, Della Reese, Dave Brubeck, Lalo Schifrin, and others

In March 2007, Bellson and 35 other jazz greats received the Living Jazz Legends Award from the Kennedy Center for the Performing Arts in Washington, DC.

The Sacred Music Of...

The Art of the Chart 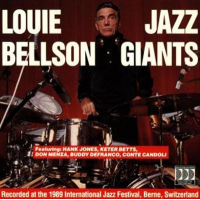 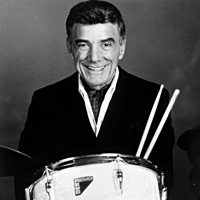 All About Jazz musician pages are maintained by musicians, publicists and trusted members like you. Interested? Tell us why you would like to improve the Louie Bellson musician page.