BY BRUCE KLAUBER
January 8, 2013
Sign in to view read count
The Fresh Sound record label has released another superb batch of late 1950s and early 1960s recordings by jazz legends, greats, near-greats and now obscure artists who, then and now, deserve wider recognition. As detailed in previous pieces, Fresh Sound is the only organization out there issuing these essential works, which otherwise would remain lost. 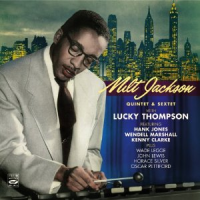 Without doubt, in the legendary category are the 1956 and 1957 quintet and sextet sessions led by vibraphonist Milt Jackson and featuring the tenor saxophone of Lucky Thompson. These sessions, Milt Jackson Quintet and Sextet with Lucky Thompson (2012), originally on the Savoy label, represent quintessential, relatively early Bags, soulfully swinging as always, and apart from what some believed were the "confines" of the Modern Jazz Quartet. This two-CD set, which includes bonus tracks from a 1956 and 1957 Atlantic Records date, stand as Jackson's first sessions as a leader, though he had been recording as early as the mid-1940s. The vibraphonist's playing is fully formed here, as is Thompson's modern version of Don Byas. Many of the sidemen on these titles, which include drummer Kenny Clarke, bassist Oscar Pettiford, pianistsHank Jones, Horace Silver, and the MJQ's John Lewis; qualify for legendary status as well. These sides—all of them—are landmarks in the history of recorded jazz.

Long before Oliver Nelson became one of the busiest and most respected composers and arrangers on the Hollywood movie and television scene, he was a hard-blowing, exciting, bluesy tenor and alto saxophonist, and when the occasion called for it, a thoughtful balladeer with a beautiful tone and attractive vibrato. Fresh Sound has issued Nelson's first outings as a leader, both Prestige blowing dates, Meet Oliver Nelson, from 1959 and Main Stem, from two years later. Nelson, who left us much too soon at the age of 43 in 1975, is heard here as a soulful combination of Dexter Gordon with overtones of early John Coltrane, and it's easy to hear where he was headed in later years with albums like Blues and the Abstract Truth (Impulse!, 1961) and classic compositions like "Stolen Moments." He swings like mad, egged on by frontline partner Kenny Dorham on trumpet, pianist Ray Bryant, bassist Wendell Marshall and drummer Art Taylor on the first session. On Main Stem, Joe Newmanplays trumpet, with a rhythm section comprised of Hank Jones on piano, George Duvivieron bass, Charlie Persip on drums, and Latin percussionist Ray Barretto on some tracks. Many releases like this were taken for granted back in the day. We know now that they shouldn't have been. 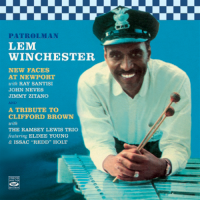 Nelson also shows up on one half of a CD devoted to the tragic vibraphonist Lem Winchester. Winchester, one of the most promising figures in jazz, was a Wilmington, Delaware, policeman who left the force to become a full-time musician in. He was on his way to becoming a certifiable star when he shot himself while, some say, playing Russian Roulette, and died at the age of 33 in 1961. Winchester plays on Nelson's quintet date of 1960, Takin Care of Business (1960), which also featured the organ of Johnny "Hammond" Smith, highlighted by an early version of Nelson's "Trane Whistle." Winchester was headed toward individuality on vibes, as something of a combination of Milt Jackson's soulfulness and the swinging fire and velocity of Terry Gibbs. Part two of this CD—both originally Prestige releases—is a Winchester-led session called Lem's Beat (1960), where Nelson served as a featured sideman.

Fresh Sound has thankfully seen fit to issue everything ever recorded by Winchester, including With Feeling (1960) and Nocturne (1960), which also features the fabulous singing of Etta Jones; the 1958 New Faces at Newport program; and from the same year, A Tribute to Clifford Brown, where the vibraphonist is backed by the instantly identifiable sound of pianist Ramsey Lewis' original trio. Also impressive are Winchester Special, from 1959 and featuring pianist Tommy Flanagan, and Another Opus, where the vibraphonist shares the front line with the flute and tenor sax of Frank Wess. Though he left us as a very young age, jazz listeners are fortunate that he left behind a reasonably extensive recorded legacy. 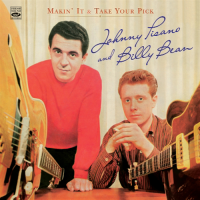 Also in the tragic—and legendary—category is Philadelphia guitarist Billy Bean, who passed away in February at the age of 79. Today, the name of Bean is one that is almost beyond obscure, but he is still regarded by those in the Philadelphia musical community who remember him, as one of the greatest guitarists who ever lived. Discovered by another Philadelphian in the mid-1950s, saxophonist Charlie Ventura, Bean was another in a long line of young talents nurtured by Chaz during the years. But Bean was special, kind of a modern day Charlie Christian, with clean and clear lines, devoid of clichés or licks. There's some Tal Farlow in there, to be sure, but with an edge. Yet another Philadelphian, guitarist Pat Martino, listened closely to Bean, as did Larry Coryell, who actually wrote a composition titled "Billy Bean."

These two efforts, recorded on the west coast in 1958 for Decca's Mood Jazz series, are among the few released under Bean's name, in this case, co-billed with fellow guitarist John Pisano. Makin' It (1957) and Take Your Pick (1958) are tightly arranged period pieces with a cool orientation, sort a "west coast jazz meets the Third Stream" with plenty of violas, cellos, flutes, vibes, and a bass clarinet and oboe in evidence. What makes these sides work and hold up extraordinary well is the playing of Bean and Pisano, which defies labels or categorization. Sadly, alcohol abuse destroyed Bean's career, and he dropped out of sight decades ago. Thankfully, Pisano is still very much with us, and is still wailing, notably at John Pisano's Guitar Night at a club in Toluca Lake, where he's been holding forth on Tuesday nights for 15 years.

There are a number of other newly-released Fresh Sound titles, all with something to recommend. Briefly noted, they include:

Inez Jones, Featuring Oscar Moore, from 1956 and 1957, features the delightful vocals of Jones, whose talents were not heard much beyond her native San Francisco, and in a very tasteful accompanying role, the guitar of Moore, heard in a rare setting away from the Nat King Cole group, where he first made his name.

Trios led by Chicago-based pianist John Young played behind hundreds of name jazz visitors to Chi-Town though the years, and recorded with dozens of them as well, including players like saxophonists Dexter Gordon, Zoot Sims and Sonny Stitt. The two-CD John Young Trios collects everything the Garner and Jamal-influenced pianist recorded for Argo and Vee-Jay in 1957, 1961 and 1962. Deservedly revered in his home town until his passing in 2008, it's too bad his fame didn't go beyond Chicago. He was a solid, versatile swinger with his own sound.

Opus De Blues, subtitled Frank Wess and Thad Jones Septets, features the saxophonist/flutist and the trumpeter/arranger/composer on two, wailing dates from 1959 and 1960. Blowing sessions, yes, but these have compactly swinging arrangements that frame solos by the co-leaders, as well as players like trombonists Curtis Fuller and Al Grey, and tenor saxophonist Billy Mitchell. Particularly standing out on the 1959 session is the drumming of Gus Johnson, who personifies taste and swing.

Trumpeter Richard Williams and alto saxophonist/flutist/arranger Leo Wright were another pair who never got the recognition due them. New Horn in Town and Blues Shout, both from 1960, represents the duo's first recordings. Wright, who later did gain some fame via his tenure with trumpeter Dizzy Gillespiefrom 1959 to 1962, is the more mature of the pair here with a rather personal style on alto—sounding like a cool Cannonball Adderley, if there is such a thing—and flute. Williams, who in later years was much in demand in Broadway pit bands and in classical ensembles, was still finding himself as a soloist. Not yet 30 years of age here, he often sounds like trumpeter Clifford Brown, but with a more pronounced vibrato. 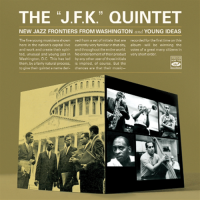 The oddity among these issues features a group called the "J.F.K." Quintet. This Washington, D.C.-based group released two LPs in 1961 on the Riverside label, New Jazz Frontiers from Washington and Young Ideas. Sort of a hybrid of hard bop/early Ornette Coleman, at times performed with what used to be called a "go-go" beat, these sides are fascinating. The saxophonist here is none other than a young Andrew White, billed back then as "Andy White," who has become one of the leading musicologists in jazz, and, believe it or not, was the electric bassist in Stevie Wonder's band from 1968 to 1970. Even back then, he had a grasp of what Coleman was doing, albeit with his own take. The only other readily known player is bassist Walter Booker, Jr. According to the little that's been written about them, these groundbreakers of a sort lasted until 1963. It must have been wild to hear them in person.

As always, Fresh Sound has issued these titles in a first-class manner in line with mastering, notes, dates, history and photography. Slowly but surely, by way of these releases and others, the good folks at Fresh Sound are ensuring there will be little or no gaps left in the history or recorded jazz.