By Glenn Astarita
January 8, 2013
Sign in to view read count
Track review of "Prelude to Dawn" 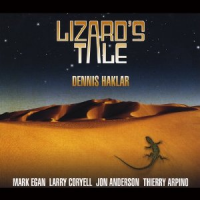 There's always been an implicit connection between progressive rock and jazz fusion. Years of Internet-based collaborations with fabled prog-rock vocalist Jon Anderson (Yes) led to his appearance on several tracks for New Jersey-based studio engineer and session guitarist Dennis Haklar's debut solo effort. The guitarist also employs former instructor, jazz guitar legend Larry Coryell, along with the imposing rhythm section of bassist Mark Egan (Pat Metheny) and drummer Thierry Arpino (Jean-Luc Ponty). Without even listening to the album, it would appear on paper that Haklar must have done something right to command the attention of these notable musicians. On that note, he succeeds rather profoundly via these harmonically attractive compositions and thoughtful arrangements.

Built on Haklar and Coryell's circular phrasings that outline the primary theme on "Prelude to Dawn," Anderson and fellow singer Stefanie Haklar's tender vocals are subtly spotted in the background, as Anderson's whispery lyrics and wordless vocals cast a floating dreamscape that shades and contrasts a burgeoning ballad extended by the guitarists' ringing harmonics and jazzy soloing. With Egan's resonating lines offering a sinuous foundation, Arpino kicks it up a notch and elevates the intensity during the bridge, but the musicians revisit the main melody towards the coda, leading to an ethereal fadeout.