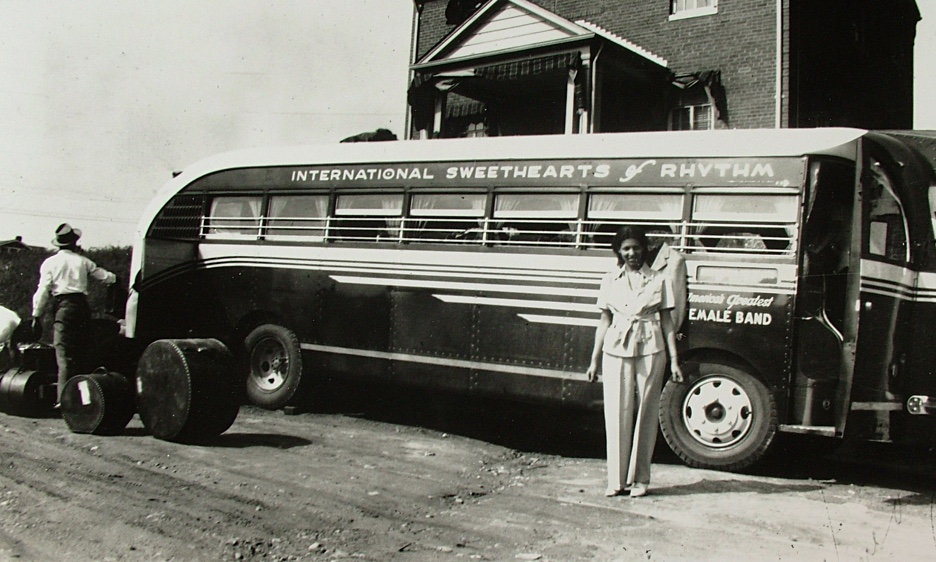 By KARL ACKERMANN
August 30, 2018
Sign in to view read count

Part 1 of Blue Highways and Sweet Music: The Territory Bands looked at the roots, drivers and challenges of the travelling groups who brought jazz music to the non-urban areas of the Southern Plains, through one-night-stands, in often impromptu venues. A black phenomenon, often misappropriated by white musicians, promoters, record labels and venues, the most active period of territory bands coincided with the rise of post-slavery American racism. In the 1920s, the Ku Klux Klan reached its peak membership of more than four million, openly functioning as a guerrilla faction of the Democratic Party in the South and intimidated blacks with extreme violence. The discriminatory Jim Crow laws that began after the Civil War, flourished well into the 1940s and the black music that so many middle-class whites found liberating, excluded the very people who created that music.

In the era of the territory bands, it was more often the media, critics and cultural institutions that usurped black musical culture, as opposed to the white musicians and band leaders themselves. One of those white musicians happened to be the press-designated "King of Jazz," of whom, in 1919, the Pasadena Evening Post said: "the friends of Mr. Whiteman have with much enthusiasm bestowed the title of "King of Jazz" upon him." While Paul Whiteman was heavily criticized for wearing the crown, it was not one that was self-attributed or with which he felt completely comfortable. Nevertheless, Whiteman was a brilliant marketer and used his notoriety to become the most financially successful bandleader of the 1920s. He had taken territory bands to franchise-like status with dozens of road versions carrying his name and crisscrossing the country. If he was conflicted by the racial injustices within the music business, he made some cursory efforts at integration. In the 1920s he helped launch the careers of artists of color, including Paul Robeson, Mildred Bailey—a member of the Coeur d'Alenea Native American nation—and later, Billie Holiday. Beyond the music, Whiteman's own words resonate with far more conviction. In his autobiography, Jazz (Popular Culture in America)

(J. H. Sears, 1926), written with Mary Margaret McBride, Whiteman opens the first chapter with this stark acknowledgement: "Jazz came to America three hundred years ago in chains. The psalm-singing Dutch traders, sailing in a man-of-war across the ocean in 1619, described their cargo as 'fourteen black African slaves for sale in his Majesty's colonies.' But priceless freight destined three centuries later to set a whole nation dancing went unnoted and unbilled..." Whiteman's group, by virtue of his worldwide fame, is an unlikely candidate to qualify as a territory band, having quite a few regular bookings in locations such as New York, Paris and London. Nonetheless, he toured all forty-eight of the then incorporated states by his own account with a particular focus on the Great Plains locations of Denver, Minneapolis, Topeka, St. Paul, Grand Rapids, Battle Creek, Kansas City, and Cleveland. As the economy of the US slowed down in its approach to the Great Depression, the consolidation of talent became a matter of survival for many bands and Whiteman was not alone in the move north.

During World War I agriculture in the Midwest had largely converted to wheat farming as a means of cheaply feeding the troops. With the end of the war, demand for the crop dropped. Agriculture was the primary business in the rural Midwest and farmers were feeling the effects of a downturn long before the crash of 1929. With the start of the Great Depression an already struggling economy hit rock bottom and beginning in 1933 the catastrophic drought that came to be known as the Dust Bowl, forced half a million residents from their homes. Populations of six states plunged as did disposable income. Many of the travelling bands were no longer sustainable, further concentrating the hubs for territory bands and drawing more musicians to the remaining music centers. Kansas City, in particular, benefitted from the migration, where under the corrupt political regime of its mayor, Tom Pendergast, the city was a wide-open mecca for entertainment and vice. The income generated in Kansas City from Prohibition alcohol sales and gambling, made some aspects of the city temporarily depression-proof. The confluence of talent in Kansas City also impacted the makeup of territory bands and the overall style of the jazz they played; soloists took center stage with more frequency and force. Performing groups grew in size, the blues played more of a part in jazz and instrumentation changed with the guitar and bass easing out the banjo and tuba.

The Northern Great Plains—as a band travel designation—expanded as far to the east as the border of New York State, if only because territory band activity thinned out as it moved away from the plains proper. Frank Foster was one of the few band participants whose history in the Plains' bands had been formally documented. Foster had been interviewed as part of the National Endowment for the Arts-funded Smithsonian Jazz Oral History Program in 1998. Foster, who died in 2011, primarily played tenor and soprano saxophone and worked as a composer, arranger and band leader as well. Before later engagements with Count Basie (circa 1953), Foster played with territory bands out of the Ohio region. The Cincinnati native grew up in a home environment that stressed music appreciation but he had no exposure to jazz before the age of nine. Originally, he was taught clarinet but moved on to saxophone at an early age and then became a member of a local dance band that had no formal name.

In the interview, Foster recalled that "Every gig at that time was a dance. There was no such thing as a jazz concert...the first band that I got with that had actually a name...a local sort of territory band...[was] under the leadership of a man named Jack Jackson, who was a saxophonist. He had this band called Jack Jackson's Jumping Jacks. I played with men who were by far my senior...I was about 14 years of age...We had lots of stock arrangements that were bought in the music store, and a few special arrangements that were made by one or two members of the band. We played for black folks. There were no mixed audiences in those days. You either played for all-black audiences or all-white audiences." Foster recalled several downtown Cincinnati venues that welcomed black territory bands: "There was a place called The Barn. It was a nightclub in downtown Cincinnati. Another place called The Hanger. These were just nightclubs, not dance halls, but just neighborhood bars. Black musicians played there, in trio or quartet format. Black patrons could not go in these places. The black musicians played there." The band members wore dark suits and white shirts as they covered their territory including Southern Ohio, Eastern Indiana and Northern Kentucky where towns were "open," allowing (or, at least, looking the other way) for gambling, drinking and late night/early morning music performances.

Foster described the traveling arrangements as ..."a caravan of cars. We usually traveled in three cars. There was always a black dance in Louisville on [Kentucky] Derby Day, and we worked there. It wasn't life on the road per se. Every trip was there and back in one day, Cincinnati being the home base. We went to Chillicothe, we came back...We went to Louisville and came back. We never went on the road for more than one day. We never went on a trip from which we didn't come back the same evening, so it really was not the road. I think...I made max $10 a job..." "Almost everything that the Basie orchestra became known for...the Jack Jackson band played. Now [in] Northern Kentucky—right across the Ohio River from Cincinnati, are the towns of Covington and Newport. Newport was a wide-open town as far as gambling was concerned. They had after-hour clubs that went from like 1 a.m. to 5 in the morning. I had to get my mother's permission to work a job in this club, the Sportsman's Club, with gambling. I was only 14, 15 years of age. I was placed in the care of an older musician, who promised my mother that he would look out for me and wouldn't let me drink or smoke or anything."

The best of the Southern Plains territory bands, in whole or in part, migrated north in the mid-1920s, ahead of the larger exodus. A highly popular figure on the southwest circuit, pianist Alphonso Trent was a teenager when he began playing with local Arkansas bands. At eighteen, in 1923, he was fronting a band in in Muskogee, Oklahoma and shortly afterward he had moved on to a Dallas-based group which came to be known by his name. In 1925, that city's historic Adolphus Hotel—built in 1912 by beer baron Adolphus Busch—offered Trent an extended engagement; a rarity for a black territory band in the south. Even rarer was that the Dallas radio station WFAA began to regularly feature the Alphonso Trent Orchestra, something that had never been done for a black group. Jimmie Lunceford—one of the bona fide stars to come out of the territory bands—heard Trent's band in Tennessee and his praise of the group resonated and led to their first recording session with Gennett Records, a growing label in the 1920s. There was a dark irony in the arrangement. The label recorded Louis Armstrong, Duke Ellington and Earl Hines in their early days but, according to a 2013 Public Broadcasting System (PBS) investigative report, Gennett also produced at least two sides for the Ku Klux Klan. Those recruitment anthems came about as a result of the label's philosophy of eschewing formal contracts, opting for a pay-per-session business model. So along with sides such as "E Flat Blues," Gennett was producing "The Bright Fiery Cross" (with the footnote: "Sung By 100% Americans") and "The Jolly Old Klansman."

It was not unheard of for the more successful territory bands to retain their original home base but expand their geography as their popularity grew. Count Basie and Andy Kirk had done just that on their way to national recognition. From 1927 through 1929 Trent's group played in Cincinnati, Louisville, Buffalo and Ontario. They made one trip to New York City for a date at the Savoy Ballroom and in the "battle-of-the-bands" tradition of territory bands, Trent's orchestra took on one led by Armstrong. Trent disbanded his orchestra in 1934 but returned with a septet four years later, and with guitarist Charlie Christian on board. Christian proved additional star power and Trent drew larger audiences and expanded his territory up through the Northern Plains into the Dakotas and Wyoming and to the east. Trent gave up music professionally in the early 1940s, going into real estate, but he continued to play as a soloist or with a small group in his native Arkansas.