Paul Ricci was born in New York in March 1958. He has performed and studied various styles of music that have led to an enduring career as a guitarist, arranger and producer in the USA and Brazil. A graduate of New England Conservatory (1980), he has performed at some of the most prestigious jazz clubs in NYC in the 1980's and 1990's sharing the stage with many great names on the international scene such as Dom Um Romao, Edison Machado, Jaki Byard, Dennis Irwin, Alex Blake, David Kikoski, Victor Jones, Santi DeBriano, Mino Cinelu, Gil Goldstein, Hugo Fattoruso, Cyro Baptista, Steve Thornton, Mike Clark, Bakithi Kumalo, Larry Willis and many others in clubs such as Fat Tuesday's, Visiones, Birdland, Zanzibar, Iridium e the Blue Note. It was at the Blue Note in November 1986 that Paul's performance alongside the pianist Jaki Byard earned him a special mention in the New York Times by the noted jazz critic John S. Wilson who singled out Ricci's “...fascinating unaccompanied performance of ''Lover Man” He has also worked with many Brazilian artists in NYC from the mid 1980's to the mid 1990's, in particular Bebel Gilberto and also Astrud Gilberto with whom he also performed with on tour in Asia and Europe in the role of guitarist, arranger and composer. In 1991 in a tribute concert to Stan Getz at the Hollywood Bowl in Los Angeles, Paul accompanied Astrud Gilberto with an all star band comprised of Roy Haynes, Gary Burton, Kenny Barron and George Mraz

. In July 1993 he played in the famed NY Public Theater`s “Shakespeare In The Park” production of “Measure For Measure” starring Kevin Kline where he performed on stage in a Latin and Caribbean musical adaptation of the play. This experience resulted in a series of shows with the noted Latin drummer Bobby Sanabria and his band ''Ascension'' which has received multiple Grammy nominations for best Latin Jazz album. Ricci's continued musical curiosity led him from Brazilian and Latin music to African music. From 1993-1997 he was part of the “African Blue Note” band led by veteran drummer Jo-Jo Kuo which in addition to being a fixture in NY's jazz clubs also accompanied noted African recording artists such as Coumba Sidibe and Sekouba Kandia Kouyate in their NY Concerts. His experience with Carribean and African music led to an important 1995 European tour with singer and activist Harry Belafonte. In 1997, Ricci called on several top names in the jazz world who had offered to collaborate in the past. The resulting independent CD “Stringsongs” was an inspired and unique blend of Jazz, Latin, African and Brazilian influences on Ricci's original compositions interpreted by the likes of Anthony Jackson (bs), Steve Jordan (dr), Randy Brecker (trpt), Manolo Badrena (perc), Alex Foster (sax), Jurim Moreira (dr), Abdoulaye Diabate (voc) and Hugo Fattoruso (piano,perc). The blend of Uruguayan Candombe with a Malian singer and a Cameroonian drummer wrapped up with a Jazz guitar and Anthony Jackson's bass is just one indication of a road well traveled through the various cultures that New York has to offer. During his travels to Brazil in 1996 he encountered and started a musical collaboration with the Italian singer Mafalda Minnozzi that soon transformed into a solid and lasting musical partnership spanning many years with 7 CD's and 2 DVD's realized as guitarist, arranger, musical director and co-producer which have all led up to the most recent refined and original project in duo with Mafalda entitled “eMPathia”. In addition to the successful discography resulting from his collaboration with Mafalda, Ricci performed hundreds of successful concerts in Brazil and other Latin American countries (Argentina, Uruguay e Paraguay) and performed on countless television appearances on all the major Brazilian networks. As composer, arranger and performer he contributed to soundtracks on various TV series and major box office films in Brazil. In Brazil their collaboration led to recordings including Brazilian legends such as Guinga and Paulo Moura and live appearances with Filo Machado, Leny Andrade and most recently in 2016 with Milton Nascimento among others. Among other highlights of his live collaborations with Mafalda was a special 2011 appearance at the Metropolitan Museum of Art of New York at the request of the illustrious luthier John Monteleone for the inaugural celebration of the exhibit “Guitar Heroes” dedicated to the jazz guitar legacy of luthiers Monteleone, D`Aquisto and D`Angelico. During all this time with Mafalda, Paul has continued to draw on the influences of Brazilian, Latin, Jazz and African music to impart an original musical style to the Italian songbook via Mafalda's powerful and athletic voice. In parallel to his work with Mafalda, Paul has continued to collaborate with other artists in various musical projects in Brazil and the USA: He recorded with Ivo Meirelles' “Funk'N Lata” a noted band from Mangueira (Rio De Janeiro's traditional cradle of Samba) in a project dedicated to the works of Jorge Ben. He also recorded for noted arranger and producer Renato Neto (Rod Stewart, Prince) He appeared on Bakithi Kumalo's (noted bassist from Paul Simon's “Graceland”) CD “In Front Of My Eyes”(2000) In 2009 as arranger, he contributed several arrangements to Butch Thomas's concerts at the noted NY Jazz club Iridium in the jazz adaptation of “The Music of Sting”, a project featuring Kenwood Dennard, Corey Glover, TM Stevens, and Lew Soloff among others. As guitarist and bassist he also recorded several songs on the CD ''From Me To You'' (2013) by award winning composer and singer Kathryn Bostic which also features Darryl Jones of the Rolling Stones, singer Keb' Mo and Doug Wimbish and Will Calhoun from the group Living Colour. In 2016 he appeared as guitarist and composer on trumpeter Tim Ouimette's new CD alongside noted bassist Jon Burr. To this day, Paul continues to share stages with some of the top Brazilian instrumentalists when not working alongside Mafalda. In addition to his continued love of performing, Paul dedicates his lifetime experience in the research and evolution of the “voice” of the Jazz guitar in collaboration with noted luthiers such as John Monteleone and Saul Koll who has built a special model co-designed him and Ricci. Show less 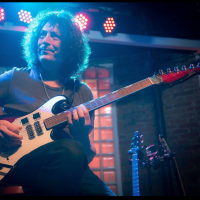 All About Jazz musician pages are maintained by musicians, publicists and trusted members like you. Interested? Tell us why you would like to improve the Paul Ricci musician page.