Mildred Bailey was a popular American jazz singer during the 1930s. Born as Mildred Rinker in Tekoa, Washington, Bailey retained the last name of her first husband, Ted Bailey, when she moved to Seattle to bolster her singing career. With the help of her second husband, Benny Stafford, she became an established blues and jazz singer on the west coast. In 1925 she secured work for her brother, Al Rinker and his partner Harry Lillis "Bing" Crosby. Crosby helped Bailey in turn by introducing her to Paul Whiteman. She sang with Paul Whiteman's band 1929 to 1933. In 1929, Whiteman had a popular radio program and when Bailey debuted with her version of "Moaning Low" in 1929, public reaction was immediate (although she didn't start making records with Whiteman until late 1931). Her first two records were as uncredited vocalist for an Eddie Lang Orchestra session in 1929 ("What Kind O' Man Is You?", an obscure Hoagy Carmichael song) that was issued only the UK and a 1930 recording of "I Like To Do Things For You" for Frankie Trumbauer

In the 1930s, as the country struggled through the Depression, households buckled under the strain of poverty and the creeping fear of darkening world events. What kept most people from being swallowed by nagging pessimism and despair was the radio. The dramas and music that came over the airwaves provided much-needed relief from anxiety and worry. ...

An Interview With Wren Marie Harrington

Q: What are your goals as an artist? A: My primary goal as a singer is to deepen the level of understanding of the intentions of songs with my particular voice, and a rich variety of languages and musical idioms. I consider the human voice a crucial element in uniting the listener with the spirit of ...

This week on Riverwalk Jazz, guests Allan Vaché and Chuck Hedges on clarinet, vocalist Rebecca Kilgore, and John Sheridan on piano join the Jim Cullum Jazz Band in a tribute to the Benny Goodman small combos. The program is distributed in the US by Public Radio International, on Sirius/XM satellite radio and can be streamed on-demand ...

Kate Reid: The Love I’m In

Dr. Kate Reid is a faculty member of the Fine Arts department of Cypress College in Southern California. However, Reid is no stuffed shirt, ivory tower type. No, she is a living, breathing, practicing jazz singer, one who holds on to tradition loosely, having fun with the music she performs. She belongs to that treasured group ...

A Highly Personal Recollection With the sad news of the death of Bob Brookmeyer, vivid memories of our occasionally turbulent relationship flooded my thoughts. We met in 1961 when he and several other prominent jazz musicians were members of the band playing Bill Finegan arrangements for my first album on the Columbia Records label. Although Bob ...

A Biographical Guide to the Great Jazz and Pop Singers 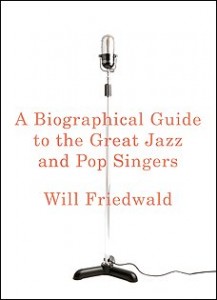 By Suzanne Cloud Let there be no doubt that Will Friedwald loves singers and the context from within which they sing—the songs of the great American songbook. In A Biographical Guide to the Great Jazz and Pop Singers, Friedwald, a respected jazz writer with seven previous books on music and popular culture, has written an encyclopedically ...