"Swingin' the Blues - The Virtuosity of Eddie Durham" book released in 2021. www.Books2Read.com/Eddie-Durham Eddie Durham, one of the most important Swing Era composer/arrangers, was born in San Marcos, Texas, on August 19, 1906. His father played the fiddle at square dances, and his oldest brother, Joe, who played cello briefly with Nat King Cole, took correspondence lessons and in turn taught Eddie and his other brothers to read and notate music. Joe Jr. also served as musical director for Teddy Roosevelt's Rough Riders Cavalry Band during World War I. Joe Jr., with his brothers Eddie, Earl, and Roosevelt, formed the Durham Brothers Orchestra in the early 1920s. The brothers were occasionally accompanied by their sister Myrtle, a pianist. Their cousins Allen and Clyde Durham later joined them. They were later joined in Dallas by another cousin, the great tenor saxophonist Herschel Evans.

According to his own account, Eddie began as a professional musician at age ten; at eighteen he was with the 101 Ranch Brass Band playing for circuses in the Southwest and traveling as far as New York City, where he performed in Yankee Stadium. In 1926 he joined a jazz group and toured the Southwest before joining the Blue Devils, who were based in Oklahoma City, in 1928. He then played with Benny Moten out of Kansas City from about 1929 to 1933. He moved to New York in 1934.

Durham's early training in music theory led to his work during the 1930s and 1940s as a jazz composer/arranger for four important bands from Oklahoma, Missouri, and Tennessee: the Blue Devils, Bennie Moten, Count Basie, and Jimmie Lunceford. The tunes Durham composed or arranged for these bands include such classics as “Moten Swing,” “Swinging the Blues,” “Topsy,” “John's Idea,” “Time Out,” “Out the Window,” “Every Tub,” “Sent for You Yesterday,” “One O'Clock Jump,” “Jumpin' at the Woodside,” “Lunceford Special,” “Harlem Shout,” and “Pigeon Walk.” In addition, he arranged music for Artie Shaw and Glenn Miller, among other white big bands of the Swing Era; Durham contributed to one of Miller's greatest hits, “In the Mood.” He is primarily considered a key figure in working out arrangements in the famous Kansas City riff style.

As an instrumentalist, Durham was proficient on both guitar and trombone. By 1929 he had begun experimenting with homemade resonators and megaphones to enhance the projection of his guitar. He is credited with being the first person to record an amplified guitar when he was featured on the 1935 Jimmie Lunceford recording of Durham's arrangement of “Hittin' the Bottle.” Durham was supposedly an influence on fellow Texan Charlie Christian, who recorded electric guitar the following year.

In 1938 Durham was the leader for a historic combo recording session with Lester Young, Count Basie's star tenor saxophonist.

In the 1940s Durham organized his own band, directed an all girl orchestra, the International Sweethearts of Rhythm, and brought together a number of important Texas jazzmen from the Kansas City era, including Joe Keyes, Hot Lips Page, and Buster Smith. During the 1950s and 1960s he performed less but still worked as an arranger for various groups. Durham and Smith appear in conversation on a 1979 video entitled “The Last of the Blue Devils,” on which Durham also plays a trombone solo. He was heralded for his non-pressure technique on the trombone.

In England, albums were released under Eddie Durham's name in 1974 and 1981; on the latter he can be heard in impressive form at age seventy-five, in particular on “Honeysuckle Rose,” where he plays single string guitar solos in the southwestern style. In the 1980s Durham toured Europe with the Harlem Blues and Jazz Band. He died in New York City on March 6, 1987. 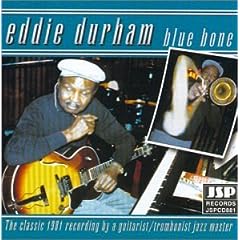 All About Jazz musician pages are maintained by musicians, publicists and trusted members like you. Interested? Tell us why you would like to improve the Joe Newman musician page.