By JOHN KELMAN
July 11, 2013
Sign in to view read count
It was a terrific set that demonstrated the benefit of long-term relationships in the case of the entire group, and the intuitive possibilities of sibling partnerships. Christine's new big band record is due in October, but ever the student looking to expand her reach, she'll be studying for eight months with John Hollenbeck; Ingrid's last record as a leader, At Sea (ArtisrtShare, 2005), was nearly a decade ago, and if her performance with Christine demonstrated anything, it's that it's well and truly time for a follow-up. It was a tremendous set that, in its unassuming honesty, was yet another highlight of the 2013 FIJM. 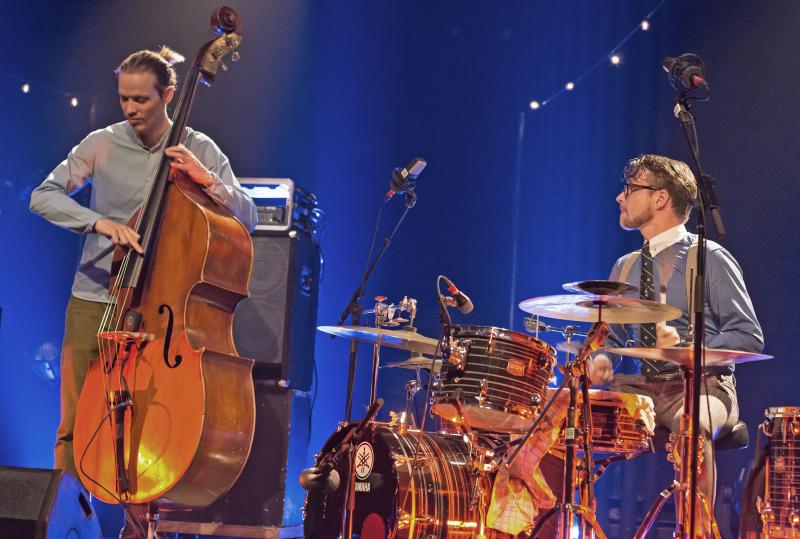 Since emerging in 2007 with its debut, Organic Warfare (Loop), and more importantly its 2009 Loop follow-up, Green Delay, Phronesis has garnered significant attention in the UK and mainland Europe. Bassist Jasper Hoiby, pianist Ivo Neame and drummer Anton Eger—the drummer replaced, for just one recording, 2010's Alive (Edition Records) (selected as "Best Jazz Album of the Year" by both Jazzwise and, even more significantly, MOJO), by American Mark Guiliana—have, since then, gone from strength to strength, their last recording, Walking Dark (Edition Records, 2012) further cementing the group's reputation as a modernistic piano trio with youthful appeal to a broad demographic.

"Last time we played here I made the mistake of wishing everyone a happy Canada Day; I was surprised—there were boos, tomatoes being thrown...I'll not make that mistake again," Høiby joked, once again playing on July 1, introducing the group and the first two tunes—"Happy Notes" and the even brighter "Love Song," which also (and curiously) followed each other, back-to-back, on both Green Delay and Alive. Like Jensen, Phronesis packed L'Astral with an appreciative audience—a step up from its 2011 appearance at the festival, where it played a free concert at the outdoor CBC Festival Stage, but demonstrated the same kind of energy and empathy, evolved as it has with two years of regular touring under its belt. 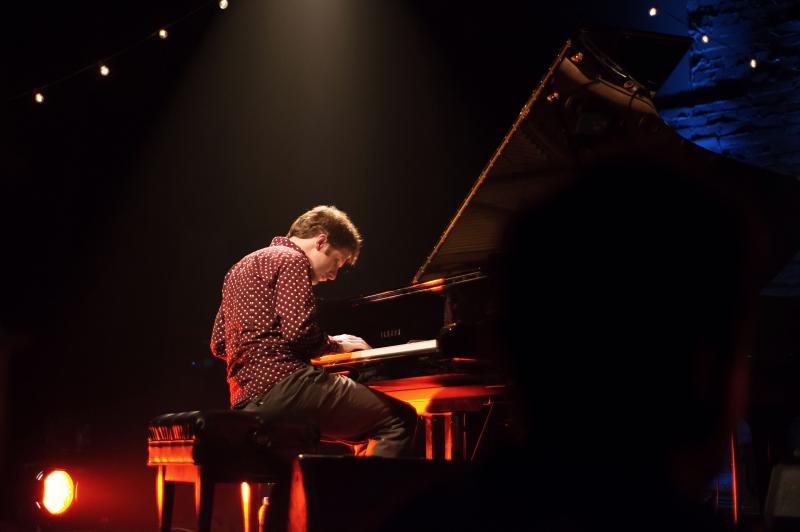 Ostensibly led by Høiby, it may be London-based, but only Neame is British, with Høiby from Denmark and Eger from Sweden, so it's a multi-national affair that's often compared to the late Swedish pianist Esbjorn Svensson's trio, e.s.t.—and, at least superficially, with good reason. As Eger's fugue-like "Seeding"—which closed out the first of two sets—demonstrated, Phronesis' music was, not unlike e.s.t.'s, as informed by classical concerns as it was the jazz vernacular. Unlike e.s.t., however (and with no disrespect intended) , there's a little less conceit, a lot more strict playing, and a greater sense of humor, especially with Eger, whose facial expressions, physical gestures and comedic timing during solos were worth the price of admission.

The entire trio clearly operates with a certain playful mischief as part of its modus operandi, even if Neame seems largely inanimate, and it was clearly felt by the Montréal audience. Neame may have been the most visually reserved, but his playing was as fundamental to the trio's ability to move from rubato free play to more fiery rhythmical constructs as were the muscular Høiby and, at times, almost impossibly frenetic Eger. It was a set filled with strong playing, light-hearted humor and periodic moments of darker exploration, as on Neame's "Charm Defensive." Whether Phronesis will build the same North America success that e.s.t. was beginning to achieve is yet to be seen, but based on its Montréal appearance, it's certainly well on its way.

With summer being most jazz musicians' busy time, it's no surprise that groups sometimes find themselves unable to maintain a consistent line up throughout their festival tours. Replacing one musician is challenging enough to a group if it's built its own voice, but losing two might seem an insurmountable hurdle. Not so, however, for guitarist Kurt Rosenwinkel, whose 21:30 set at Théâtre Jean-Duceppe was a perfect way to close out five nights of coverage at the 2013 FIJM. He may have come with bassist Ugonna Okegwo replacing Eric Revis and Kendrick Scott taking the place of drummer Justin Faulkner, but both have played with the guitarist before, and if there were any bumps in this road, they sure weren't noticeable.

Sometimes, in fact, the energy of dealing with adversity can make a performance even better, and Rosenwinkel's New Quartet certainly delivered a powerful and memorable show that consisted largely of material from his latest release, Star of Jupiter (Wommusic, 2012), a major leap forward for the 42 year-old guitarist who has become as influential on the next generation of aspiring guitarists as Pat Metheny did when he released Pat Metheny Group (ECM) in 1978.

The only tune not from Star of Jupiter was the opening "Our Secret World," which first appeared on Rosenwinkel's electronica-inflected Heartcore (Verve, 2003), and later, on Our Secret World (Wommusic, 2010), his large ensemble collaboration with Portugal's Orquestra Jazz de Matosinhos. Rather than wearing the small microphone pinned to his shirt that he used in his 2004 appearance at the TD Ottawa Jazz Festival, he used a regular microphone, into which he often doubled his lines, but processed along with his guitar to create a unified sound that has, over the years, evolved into something as unmistakable and instantly recognizable as those who influenced him when he was coming up. 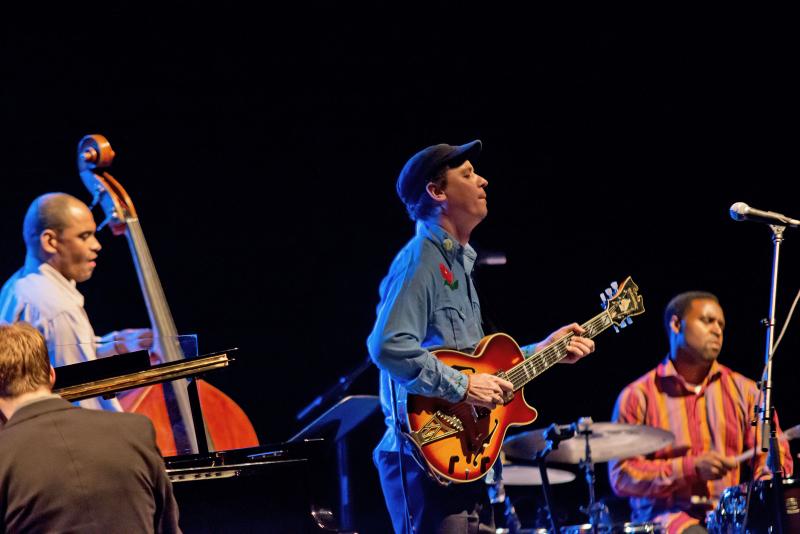 Another point about his 2004 Ottawa appearance worth noting: when the soundcheck was over, Rosenwinkel remained on the stage of the Library and Archives Canada theater until as close to "doors open" as possible, working on ideas that have since become both fully realized and completely integrated into his overall approach. That Rosenwinkel's a master of his instrument goes without saying, but the same way that guitarists like Metheny, Allan Holdsworth and Bill Frisell have shaped their own inimitable languages, so, too, has Rosenwinkel, with remarkable sweeping lines that seemed almost impossible, except that they were being played, with precise articulation, in front of the Montréal audience's very eyes. 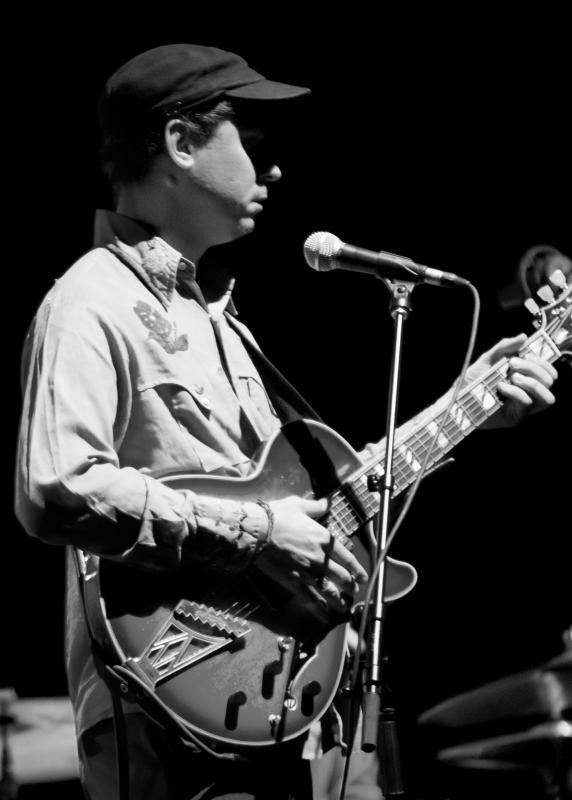 That Rosenwinkel often opens his shows with "Our Secret World" suggests it's a good warm-up tune for whatever group he's surrounded himself with onstage, but it was clearly more than a warm-up; it was a workout that brought the quartet completely together. Also featuring 29 year-old pianist Aaron Parks—whose own star has continued to rise since he first appeared with Terence Blanchard a decade ago and, more recently, with the collective James Farm, whose 2012 performance at Germany's Enjoy Jazz Festival was a highlight of that year—Rosenwinkel then moved into material from Star of Jupiter, starting with the almost soulful "Welcome Home," but with its odd meters and unexpected accents, something a little less danceable and a lot more cerebral. Parks, on piano, didn't inject the electronic keyboards he does on the recording, but still provided the ambiguous harmonies that gave the tune its push and pull, tension and release.

"A Shifting Design" came next, its idiosyncratic head ultimately settling into a bright-tempo'd swing, with Okegwo and Scott joined at the hip as Rosenwinkel managed to sing along with his outrageously complex yet clearly (at least, to Rosenwinkel) lyrical lines. Parks introduced "Heavenly Bodies" alone with an impressionistic solo, and if it's not something normally obvious, the melody to this waltz-time ballad suggests a hint of John McLaughlin also under Rosenwinkel's covers, though it eventually evolved into a heavier place that could be called fusion in its strong backbeat and occasional power chords, but was equally something else entirely.

Throughout the set, Okewgo—who was seen in an almost diametrically opposed context in Ottawa with trumpeter Tom Harrell the week before—proved his mettle, righteously swinging "Homage A'Mitch" while driving the closing title track to Star of Jupiter with a Latin groove bolstered by Scott's groove-centric but relentlessly frenetic support. The drummer's equally unrelenting outro solo brought the tune back to its theme to close out the set on a powerful and decisive note, but only after Rosenwinkel delivered a soaring solo that clearly spoke with his complex language but still managed to evoke a hint of the American Midwest that's been such a longstanding undercurrent for Metheny, one of Rosenwinkel's early influences—albeit one long since subsumed into the younger guitarist's own vernacular. One of Metheny's signatures is music that sounds easy but reveals its greater complexities under the hood; for the most part, Rosenwinkel's music was unmistakably challenging, yet still managed to remain accessible and thoroughly exhilarating throughout the set.

After a well-deserved standing ovation, Rosenwinkel returned with a perfect encore, the gentle "Under It All." His a cappella introduction was—just as it is on the record (but, of course, completely different)—impressive, suggesting that Rosenwinkel may well have a solo guitar recording in him. Who knows? The one thing Rosenwinkel has been with his discography is surprising, following a powerhouse live record (2008's The Remedy) with a gentle trio record of standards (2009's Reflections (both also on his Wommusic imprint); then moving from a large ensemble record (Our Secret World) to what, in Star of Jupiter, may be his most fully realized recording to date. Whatever strikes Rosenwinkel next, the only certainty is that it will be well worth hearing. 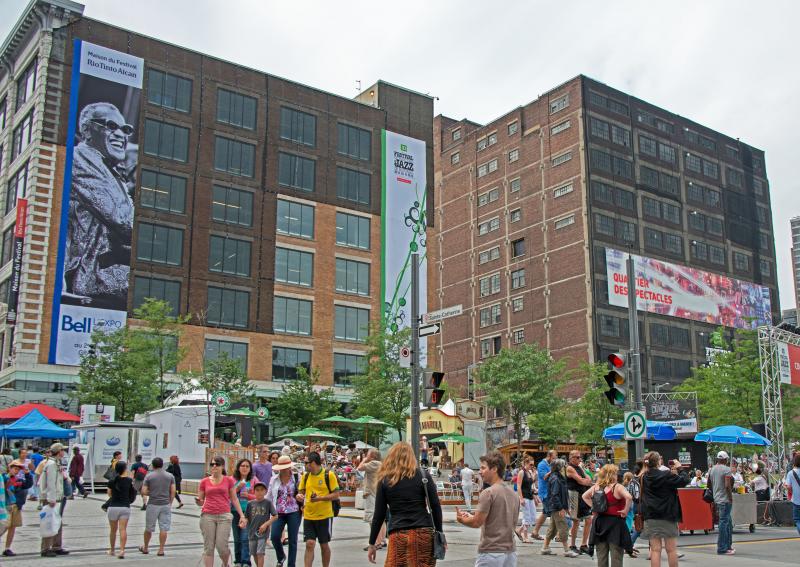 Leaving for home on July 3, there were still another five days of concerts to go at the Festival International de Jazz de Montréal, but despite a relatively short stay, and despite limiting the number of shows seen, it was proof, once again, that FIJM is a festival like no other, a place where, for five days, it was possible to ignore what was going on in the world and live in a jazz bubble. There's always a bit of culture shock going home from FIJM, but that only makes returning to the festival all the more desirable. With FIJM turning 35 in 2014, there's no doubt it'll be another year to remember.