Zakir Hussain is today appreciated both in the field of percussion and in the music world at large as an international phenomenon. A classical tabla virtuoso of the highest order, his consistently brilliant and exciting performances have not only established him as a national treasure in his own country, India, but gained him worldwide fame. The favorite accompanist for many of India's greatest classical musicians and dancers, from Ali Akbar Khan and Ravi Shankar to Birju Maharaj and Shivkumar Sharma, he has not let his genius rest there. His playing is marked by uncanny intuition and masterful improvisational dexterity, founded in formidable knowledge and study.

A child prodigy, Zakir was touring by the age of twelve, the gifted son of his great father, tabla legend Ustad Alla Rakha. Zakir came to the United States in 1970, embarking on an international career which includes no fewer than 150 concert dates a year. He has composed and recorded many albums and soundtracks, and has received widespread recognition as a composer for his many ensembles and historic collaborations. Most recently, he has composed soundtracks for the films In Custody, Ismail Merchant's directorial debut, Little Buddha by Bernardo Bertolucci, for which Zakir composed, performed and acted as Indian music advisor and Vanaprastham, chosen to be screened at the Cannes Film Festival in May, 1999.

Zakir received the distinct honor of co-composing the opening music for the Summer Olympics in Atlanta, 1996, and was commissioned to compose music for San Francisco's premiere contemporary ballet company, Lines, and to compose an original work for the San Francisco Jazz Festival, both in 1998. He has received numerous grants and awards, including participation in the Meet the Composer programs funded by the Pew Memorial Trust.

In 1987, his first solo release, Making Music, was acclaimed as “one of the most inspired East-West fusion albums ever recorded.” In 1988, he became the youngest percussionist to ever be awarded the title of “Padma Shri” by the Indian government, a title given to civilians of merit. In 1990, he was awarded the Indo-American Award in recognition for his outstanding cultural contribution to relations between the United States and India. In April, 1991, he was presented with the Sangeet Natak Akademi Award by the President of India, making him one of the youngest musicians to receive this recognition from India's governing cultural institute. Zakir is the recipient of the 1999 National Heritage Fellowship, the United States' most prestigious honor for a master in the traditional arts.

In 1992, Planet Drum, an album co-created and produced by Zakir and Mickey Hart, was awarded a Grammy for Best World Music Album, the Downbeat Critics Poll for Best World Beat Album and the NARM Indie Best Seller Award for World Music Recording. Planet Drum, with Zakir as music director, toured nationally in 1996 and 1997. Zakir continues also to tour with the musicians from Shakti—John McLaughlin, Shankar and T.H. Vinayakram—in different collaborations and ensembles as well as lead various percussion ensembles of his own design. In Summer '99, Shakti re-grouped for an international tour.

In 1992, Zakir founded Moment! Records which features original collaborations in the field of contemporary world music, as well as live concert performances by great masters of the classical music of India. The label presents Zakir's own world percussion ensemble, The Rhythm Experience, both North and South Indian classical recordings, Best of Shakti, and a Masters of Percussion series.

Zakir Hussain And The... 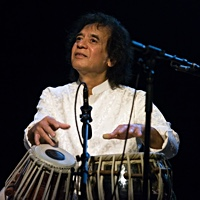 All About Jazz musician pages are maintained by musicians, publicists and trusted members like you. Interested? Tell us why you would like to improve the Zakir Hussain musician page.