Telarc International, a leader in jazz recording since the 1980s, adds another stellar name to its impressive roster by bringing pianist Cyrus Chestnut into the fold. Chestnut has recently finished an album with the help of producer Elaine Martone (McCoy Tyner, Tierney Sutton, Ray Brown). Genuine Chestnut, a mix of original material with a few covers, is scheduled for release in February 2006. “There’s a good team at Telarc, and an excellent reputation in jazz that spans almost two decades,” says Chestnut. “I’m very honored to be a part of the legacy of great artists who have recorded with them.” Born in January 1963, Chestnut first sat down at the piano with his father at age five, and began his formal training at seven

The Boat House located in in Newport News (Virginia) was a short lived venue that hosted mostly rock and some country music acts. It closed for undisclosed reasons (unrelated to Covid) and sat dormant for two years until it was reopened as Good Vibes under new ownership with a new state of the art sound system, ... 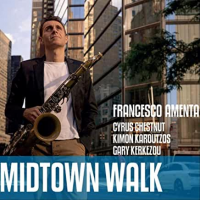 Album: All Or Nothing
By Dr. Trineice Robinson-Martin
Label: 4RM Productions
Released: 2021
Duration: 5:49

Quite often it's not so much the music itself that compels you to sit and listen but the feeling the music stirs within. You begin to recall moments from the past that have made you feel of a certain place and time when things were just a bit more either out there or, as in the ...