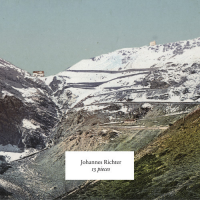 One man, one piano, and no score. That is the protocol for Danish musician Johannes Richter's 13 Pieces, a heartfelt and honest session of instantly composed music. Much like Craig Taborn's Avenging Angel (ECM, 2011), Richter constructs magic from thin air.

His approach, like that of Keith Jarrett's early solo work, is scarcely recognizable as jazz. What it is, though, is unmistakably adroit improvisation. He opens the disc, a luscious vinyl pressing (with a digital download option), with the ruminative "Stilleben I" and "Stilleben II." His ruminating piano touch furtively delivers driblets of notes as if Richter were beginning a meditative exercise. Indeed he is. Often, the silence between notes speaks louder than the resonance.

He moves onto locomotion with "Present I" and "Present II," both dancing, springing frolics of two hands competing. He doesn't so much open a can of Cecil Taylor as he does free the energy of the 88 keys. Then his moves onto "Osculation I" and "Osculation II," echoey flights that could be a chorale prelude, but definitely (or maybe defiantly) come from a sacred space. He is in full flight by the time he gets to "Contraction I" and "Contraction II." His left hand, heavy on the keys, brews a dark ponderous sound that is a direct contradiction to the disc's opening.

All is summed up with the penultimate track "Finale," where he brings together all the pieces and parts he displayed in preparation to this 3:47 of curriculum vitae. If just short of four minutes can sum up the accomplishments of a life, this track does. It is a finished canvas of modern art, of splashed reds and yellows that pull together a consistent affirmation of an improvising musician.