Bo Gustav Stenson (mostly known as Bobo Stenson, born in 1944) is a Swedish piano player and jazz musician. Stenson was noted as early as 1963, when he stepped up from the local scene in Västerås to start playing frequently in Stockholm, where he accompanied a long line of visiting American players including Sonny Rollins, Stan Getz and Gary Burton. He also worked closely with Don Cherry from the beginning of the trumpeter's residency in Scandinavia. The 70's was an intensive period for Bobo Stenson, playing in many constellations, amongst them the long-standing band Rena Rama with Palle Danielsson and a very popular trio with Arild Andersen and Jon Christensen, later also with Jan Garbarek

After the release of several trio and quartet albums, Antonio Flinta, a Chilean-born pianist now based in Italy, tries on the solo piano format for size. He wears it well. Secrets Of A Kiri Tree features Flinta alone at the keyboard, exploring three of his engagingly melodic originals along with four covers, including Thelonious Monk's “'Round ...

Maria Kruttli: The Kind of Happy One 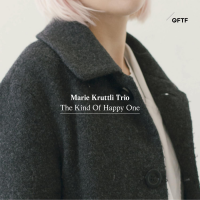 A vibrant modern jazz hub, Norway is famous for having introduced the likes of Jan Garbarek, Terje Rypdal, Jon Christensen and Arild Andersen to the international jazz landscape--all of whom had brought something fundamentally new to the jazz tradition in the '70s. As chance would have it, each of the mentioned heavyweights were also mainly at ...

Only with a very heavy heart one can write an obituary for a young friend and great musician who left this world suddenly, prematurely and unjustly, leaving his colleagues and pupils, but above all his family, in mourning. It will hopefully be useful to leave a trace of his musical contributions and a lead for future ...