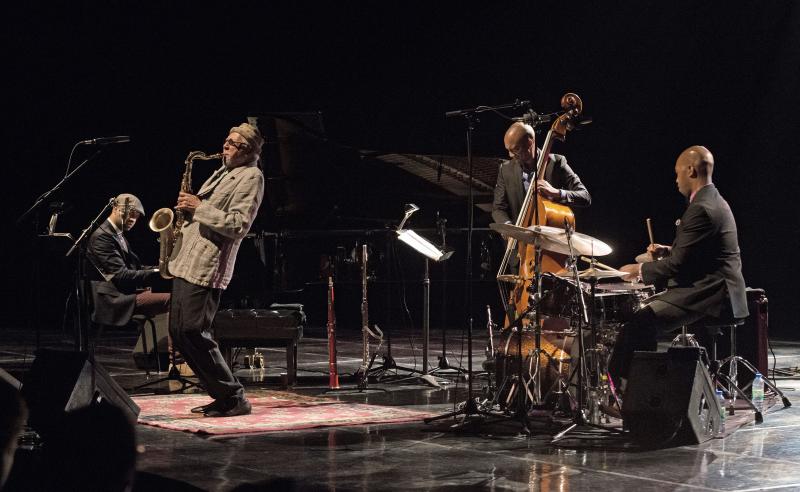 By JOHN KELMAN
July 11, 2013
Sign in to view read count
Festival International de Jazz de Montréal
Montréal, Canada
June 28-July 7, 2013
After taking a year off to curate an All About Jazz Presents: Doing It Norway at Norway's 2012 Kongsberg Jazz Festival, it was great to return to the city that hosts what must surely be the largest jazz festival in the world. Where else can an artist like Stevie Wonder open up the festival with an outdoor Grand Spectacle, in front of nearly a quarter of a million people? Or guitarist Pat Metheny finish his world tour in support of Pat Metheny's last record, 2005's The Way Up (Nonesuch) with a powerhouse outdoor show in front of over 125,000? The answer is? Only in Montréal, Canada, the city that, for the duration of its annual jazz festival, closes off six square blocks of the downtown core and turns it into a place where, whether you're there for a day, a weekend or a week, it's like living in a jazz bubble; everything that's needed is right there, within easy walking distance—hotels, restaurants and indoor ticketed venues, while the numerous outdoor stages provide additional world class performances, free of charge. In fact, while plenty of people from around the world make Montréal an annual destination for the breadth of artists who, sometimes, put on events that can only be seen in Montréal in ticketed venues—ranging from the multi-room Place des Arts to more intimate spots like L'Astral, the club situated in the festival's Maison du Festival that opened during the festival's 30th anniversary in 2009, or Gésu, a room that's seen everyone from Norwegian pianist Ketil Bjornstad and guitarist Eivind Aarset (together and individually) to American guitarist Bill Frisell—there are those who come to the festival solely for the outdoor events, and walk away equally happy.

This year's line-up was, as ever, representative of the broadest possible purview that jazz has to offer. Celebrating its own anniversary this year, the By Invitation series opened with a tremendous three-night run by saxophonist Charles Lloyd. Three outstanding shows brought his current quartet, last heard on Athens Concert (ECM, 2011); his more improv-heavy trio with drummer Eric Harland and tabla master Zakir Hussain, responsible for 2006's remarkable Sangam (ECM); and an evening of duos and trios featuring Lloyd Quartet pianist Jason Moran—documented as a duo for the first time this year on Hagar's Song (ECM, 2013) and a first-time encounter with guitarist Bill Frisell, who'd delivered his own solo performance at L'Astral the prior evening.

Pianist Vijay Iyer was the festival's second invitée, but with so many venues, so many choices, it's impossible to cover even a small percentage of the 800 concerts taking over the festival's 10-day run. Guitarist Kurt Rosenwinkel's New Quartet performance overlaps with pianist Steve Kuhn's outstanding trio with bassist Steve Swallow and drummer Joey Baron (who gave the 2013 TD Ottawa Jazz Festival one of its best shows of the year just a few days earlier); Lloyd's Sangam show intersected with a spectacular 80th birthday celebration for saxophonist Wayne Shorter, that included, in addition to his now 13 year-old quartet, performances by Dave Douglas and Joe Lovano's Shorter-inspired Sound Prints group (which also gave a knockout performance in Ottawa last year) and Trio ACS, a new constellation with pianist Geri Allen, drummer Terri Lyne Carrington and bassist Esperanza Spalding will have to decide between one guitarist/vocalist and another, Boz Scaggs, who performed just a few hundred meters away in another of Place des Arts' beautiful theaters. 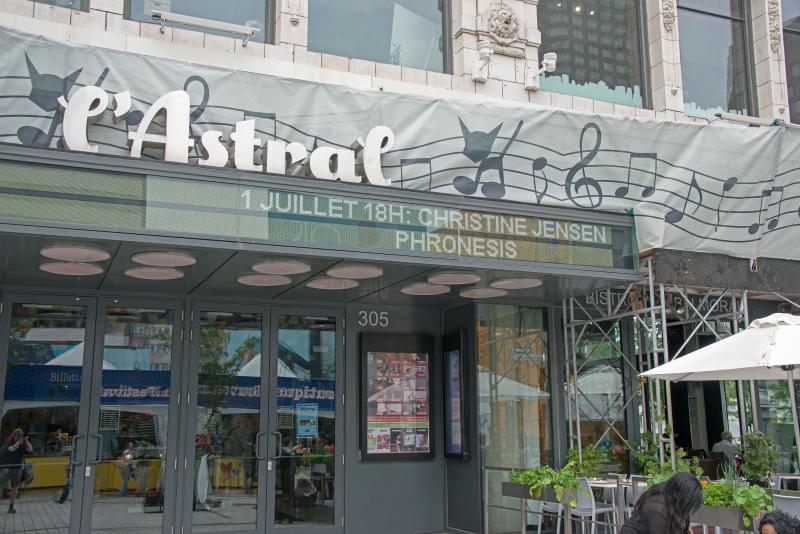 It's also a treat to see all the construction taking place on Rue Ste-Catherine Ouest, when last visiting FIJM in 2011, largely completed, too. Two years ago, the street was completely torn up, making it difficult to get from one side to the other—not a problem for those who knew that there was an indoor tunnel from the shopping mall abutting the Hyatt Regency Hotel that goes directly into Place des Arts, but still something that disrupted the jazz bubble that year. Now, with work mostly done, the whole outdoor festival area is back to being a beautiful place to hang between shows, where, along with the free shows at the outdoor stages, it's possible to see mimes, brass bands parading down the street, and so much more. The first day of the festival may have been marred by some heavy rain, but the clouds began to lift on the second and, by the third day, the weather had returned to the sunny, warm summer climate that's always made this the perfect time of year for a visit to FIJM.

Two very different saxophone-led quartets opened the 2013 festival's series of shows at Place des Arts' Théâtre Jean-Duceppe. First, at 19:00, Charles Lloyd delivered the opening show of his three-night By Invitation series run with his quartet of the past seven years, first heard on 2007's Rabo de Nube (ECM, 2007), followed by Ravi Coltrane at 21:30, bringing a completely different group than that heard on his most recent recording, Spirit Fiction (Blue Note, 2012). 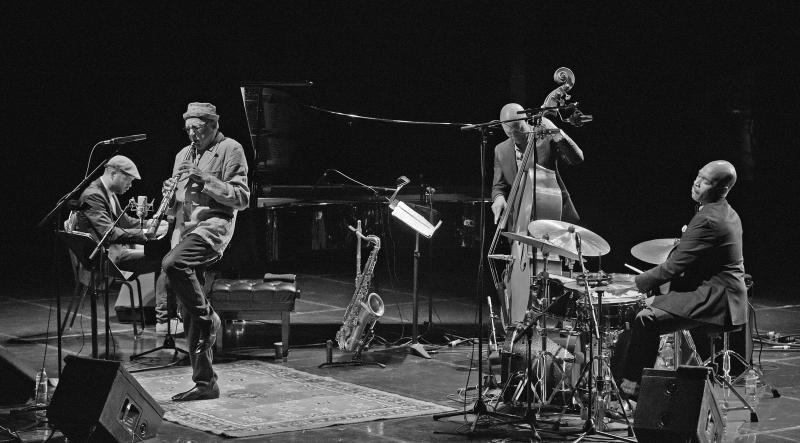 Lloyd's career, since first recording hooking up with ECM Records on 1990's Fish Out of Water—his first five quartet dates, all with Swedish pianist Bobo Stenson, recently documented on his Old & New Masters Editions box, Quartets (2013)—seems to have been on a relentlessly upward trajectory with no end in sight. From special projects, like his home-recorded duo set with Billy Higgins, Which Way is East (2004) (recorded just a few short months before the drummer/multi-instrumentalist passed away), to collaborations with everyone from guitarist John Abercrombie and bassist Dave Holland to pianist Brad Mehldau and Greek singer Maria Farantouri, Lloyd's output for the label has been exceptional in both its consistency and its ongoing series of surprises. When the saxophonist put together his current quartet, with pianist Jason Moran, bassist Reuben Rogers and drummer Eric Harland, who knew that it would ultimately become his most impressive quartet ever—and that's no mean feat, given his superlative quartets with Stenson and, of course, the group that started it all, his 1960s quartet with pianist Keith Jarrett and drummer Jack DeJohnette that made Lloyd the closest thing jazz had to a true pop star at the time, with Atlantic Records releases like 1966's Dream Weaver and 1967's Forest Flower (both on Atlantic).

That Lloyd's current quartet has evolved into his strongest yet was supported by its stellar Montréal Jazz Festival performance. This was a group so completely in-tune with each other that its members effortlessly moved around within the broader skeletal context of the compositions, reinventing them each and every night. With a group of relatively young players (Rogers and Moran the elders at 38; Harland the youngster at 36), Lloyd has a quartet that, nevertheless, has such broad experience and encyclopedic knowledge of the tradition—and that includes Lloyd's own contributions to that tradition—that it can effortlessly move from free-flowing rubato tone poems to fervently swinging blues—sometimes in the same song.

Lloyd opened the set with his taragato—the nasally, single-reeded Hungarian wind instrument—but also devoted plenty of time to his main axe, the tenor saxophone, even pulling out his flute for one piece. Many of the songs in Lloyd's 90-minute set began with Lloyd alone, motivically driven to find a way into the music for the rest of his group, but always focused on the music and not his inimitable virtuosity. On tenor, his control over multiphonics—occasionally injecting the slightest harmonic overtone—was in some ways more remarkable than those who are more extreme in their use of such extended techniques—again, always in service of the music.

That's not to say that he didn't impress with the kind of cascading flurries that were something of a signature, or the seeming non sequiturs that were just like Lloyd when he's speaking, an artist with such a rich legacy that he can instantly shuffle from high school with Booker Little to playing with Bobo Stenson. In performance, Lloyd may move from one musical thought to another in the space of a nanosecond, but it would suddenly become crystal clear that, as distanced as they might have seemed on the surface, the connection between them was ultimately revealed ...just not so overtly as to be immediately obvious. 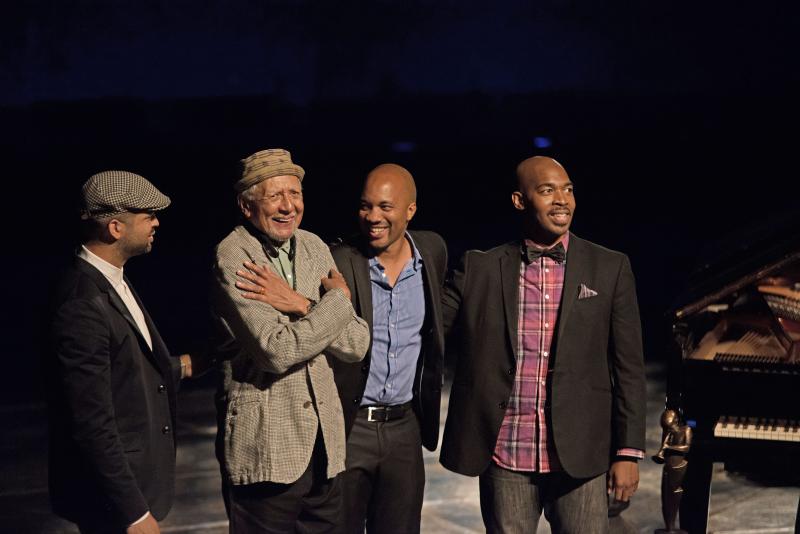 Moran has evolved into the perfect foil for Lloyd; ever-thoughtful, he could oftentimes be seen hovering over the keys, waiting for the right moment to inject just the right chord to either support where the group was going or suggest a new destination. Sometimes it was a single chord, held onto almost interminably until—as Rogers and Harland simultaneously (and magically) picked up on the same signal—the three players would break the tension by resolving into a visceral groove or dissolving into rubato free play.

Rogers—heard recently in Hamburg, Germany, where he appeared with saxophonist Joshua Redman's quartet (also playing Montréal, but here with a string ensemble to perform music from the saxophonist's latest Nonesuch recording, 2013's Walking Shadows) at the 2013 ELBJazz Festival—contributed singing solos and, in contrast, more rhythm-focused features that, when combined with the loose, free-flowing Harland, was what made Lloyd's quartet as much about implication as it was explicit delivery. Time ebbed and flowed and melodies appeared out of nowhere, as in the beautiful medley that somehow resolved into a most tender reading of "Somewhere," from the 1957 Broadway play West Side Story. 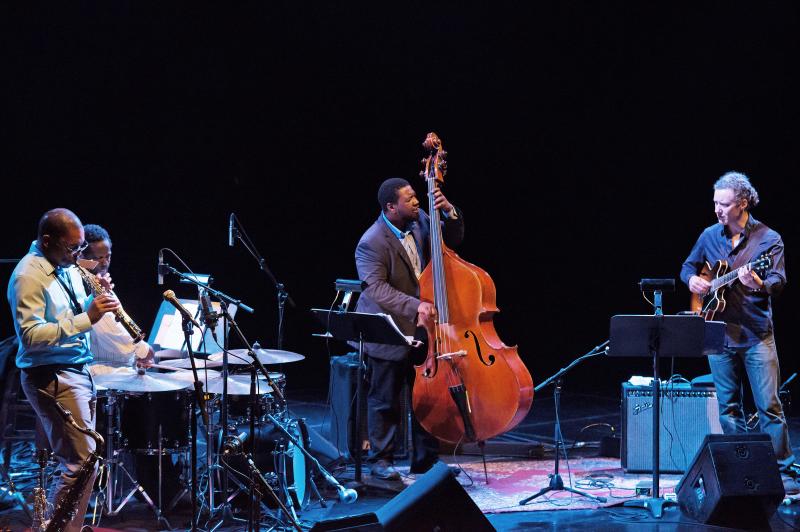 Lloyd played the melody with such vulnerability that the poignant hope expressed in the song's lyrics weren't necessary to feel them; it's that very ability to get to the absolute core of a song—whether it's a standard, a pop tune or a Lloyd original—that's made the saxophonist's current quartet so definitive. Whether it was the result of Lloyd winning the festival's annual Miles Davis Award immediately prior to the start of the show, the phase of the moon or some other random occurrence, Lloyd's freedom to explore three very different contexts over three nights commenced with an opening performance that will easily rank as one of this year's best—and act as an early bar-raiser for the saxophonist's entire By Invitation series; it would also make a terrific live album, if only it were being recorded.

A little less than two hours later, saxophonist Ravi Coltrane took to the same stage with a quartet that signalled a significant shift for this progeny of two jazz giants: saxophonist John Coltrane and pianist/harpist Alice Coltrane. That he's managed to come out from under the shadow of such legends has been an accomplishment in and of itself, but with a slowly growing discography, including last year's superb Spirit Fiction, he's also made clear that whatever direction he's taken is unequivocally his own.