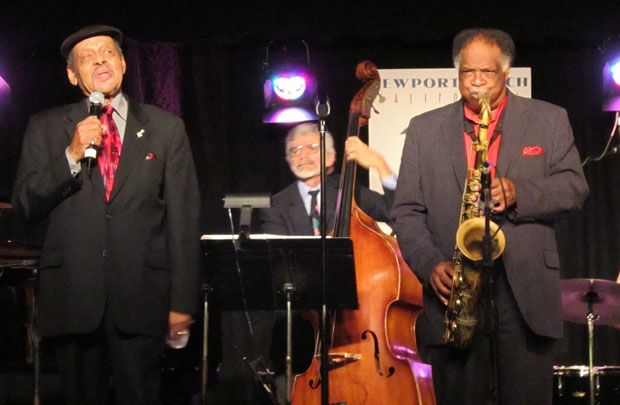 An abundance of top-level jazz in the glamorous ocean-side setting of the Newport Beach Marriott Hotel has made the annual Newport Beach Jazz Party one of the most popular on the circuit. The extended President's Day weekend event attracted listeners from 27 states and Canada, and as far away as Australia, England and Austria. The party was billed "right down the middle and straight-ahead jazz," and fulfilled that premise.

Thrilling tributes, swinging big bands and exhilarating combos filled 40-plus hours of live jazz from some eighty musicians. The strongest audience response of the weekend was earned by Australian trumpeter James Morrison, whose virtuosity on multiple brass instruments had long ago gained him the nickname "The Wonder from Down Under." He lived up to that billing with incredible range and power that involved breathtaking leaps into awesome heights. He's also a musical gymnast on trombone, shifting with elastic ease from extremely high notes to bottom-low sounds, always with agreeable charm, never an egotistical attitude. As a leader, Morrison enticed with the ballad "The Second Time Around," then blazed white-hot on "Basin Street Blues." He never failed to thrill, entertain and surprise, as he once did by sitting at the piano to create a left-hand accompaniment while playing trumpet with his right.

A crowd favorite was a solo set by Romanian pianist Marian Petrescu. Quicksilver treble runs and rumbling bass chords replicated the dazzling keyboard ability of Oscar Peterson, but lacked the feeling of the late great's luminous heart and soul. Repeated cascades of notes made it seem like Petrescu was playing to impress rather than to express, more Roger Williams than Oscar Peterson. In combo sets, Petrescu's solos and support work came across as more jazz-inspired.

Another crowd-pleaser was Los Angeles-born guitarist Graham Dechter, at 25 displaying sheer virtuosity and a warm, swinging sound reminiscent of Joe Pass and Joe Pass. He sprinted through "Broadway" with dazzling dexterity, then created murmured nuances on "The Nearness of You" before getting downright greasy for the Duke Ellington classic, "I Ain't Got Nothin' But the Blues." The audience seemed mesmerized during every moment of his set with the stellar Jeff Hamilton. 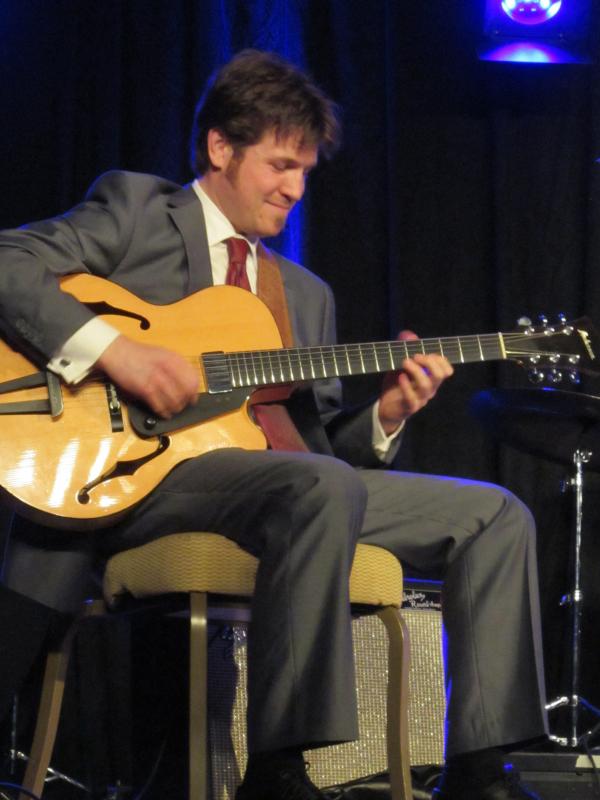 The Hamilton trio always delivers precise connectivity and inventive arrangements, many written by pianist Tamir Hendelman, who created stunning solo after solo. The trio's bassist, Christoph Luty, had a recent hand injury, but sub John Clayton fit perfectly and, as always, never played an extraneous note. Hamilton's expert use of cymbals is unparalleled, and the element of using only his hands and fingertips is always refreshing to watch and hear.

For many, the event's three powerhouse orchestras brought the weekend's highest peaks. Opening night's "Basie, Benny and Buddy Big Band" lived up to its billing of tribute to these valued icons of jazz (the concept created by trumpeter Byron Stripling, whose other professional obligations precluded his participation).

The second orchestra, led by Cuban-born trumpeter-pianist Arturo Sandoval, had most of the same personnel, this time burning an Afro-Cuban mode. The leader launched the set with an a cappella horn rendition of "God Bless America," a salute to his achieving political asylum in 1990, and U.S. citizenship nine years later. "Jazz is freedom," he declared.

Then the trumpet titan erupted into an avalanche of fiery bebop licks spiked by fluid scatting. Two vocals by Rebecca Martin showcased her stunning style on "Quizas Quizas Quizas" and "A Night in Tunisia" with the big band solidly supportive. Sandoval then called Bergeron out of the brass section to elevate the set's excitement with dueling trumpets on Gordon Goodwin’s Little Phat Band "Maynard and Waynard," the pair delivering notes so high the coyotes must have been howling in the hinterlands. The set ended with a mambo, Sandoval adding some dance steps from his heritage.

Closing night featured the Clayton-Hamilton Jazz Orchestra, with bassist John Clayton out front, his brother Jeff Clayton on alto sax, and co-leader Jeff Hamilton at the drums. The band delivered excellent dynamics via strong section work and intense solos, but occasionally sounded a bit rough around the edges, especially during the segment with vocalist Ernie Andrews, who crooned and delivered some righteous blues in his brief spot.

The few other vocalists at this mostly instrumental-jazz weekend were always audience-pleasers. Barbara Morrison, recently recovered from a leg amputation, didn't need the sympathy vote to gain accolades for rich renditions of jewels such as "Polka Dots and Moonbeams," "I Loves You, Porgy" and "Ev'ry Time We Say Goodbye." Her command of range and depth of emotion was amazing and moving. Octogenarian vocalist Frank D'Rone cancelled due to a health issue, replaced by Palm Springs entertainer Mike Costley, who ably sang and scatted from the standards book, including the Joe Williams late-career hit, "Here's to Life." Classy Mary Stallings exuded elements of Lena Horne in her lush crooning of "How Deep Is the Ocean," A Foggy Day" and "Lullaby of the Leaves."

The two champagne brunches weren't light in either food or musical fare. L.A. trumpeter Gilbert Castellanos led a strong quartet with Scott Hamilton on tenor, Llew Matthews at the piano, Chuck Berghofer on bass and Butch Miles on drums to deliver a high energy set as early as 9:30 a.m. A set co-led by vocalist Andrews and tenor balladeer Houston Person delivered a satisfying nostalgic trip to the golden age of jazz. At 84, Andrews still performed with the zest and timing of his earlier years, in both big band and combo settings.

Throughout the weekend, L.A.'s first-call rhythm players were mixed and matched, among them bassist Berghofer (creator of that opening bass slide on the 1966 Nancy Sinatra hit, "These Boots Are Made for Walkin'"), guitarists Larry Koonse and Doug MacDonald, and drummers Joe La Barbera and Paul Kreibich.

In addition to the all-events menu of 30 hour-long sets in the hotel, there were 14 optional dinner-hour small-combo and solo sets in two restaurants, the hotel's Sam and Harry's and The Ritz across the boulevard. Those sets included tributes to Paul Desmond (Bruce Babad) and Nat King Cole and Chet Baker (John Proulx and Ron Stout). Comic relief was adroitly delivered in two sets of the zany Pete Barbutti, plus Peplowski's unending acerbic wit when he was anywhere near a microphone.

Two Austrian tourists made time for the party at the end of their motorcycle tour of the West. Andreas Werth called the experience "a dance of quality, the way the style and mood changed with different combinations of musicians." Alex Matauschek simply termed the performances "amazing and incredible."

When the four days and nights of live music finally ended, it wasn't over yet for pianist Petrescu and trumpeter Morrison, who returned to the stage of the vacated ballroom at 1 a.m. to play just "One More Time."

The party was coproduced by Joe Rothman and John McClure. The pair also has scheduled another "Sunset Jazz at Newport" series of Wednesday nights during summer, July 11-Sept. 19, in cooperation with radio station KKJZ.