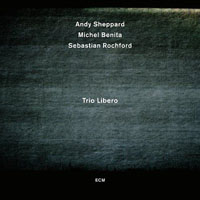 Sometimes unexpected connections yield the most wonderful results. Saxophonist Andy Sheppard, bassist Michel Benita and drummer Sebastian Rochford all have more than enough cred to suggest capability in any context, but none of their individual pursuits could presage a collaboration like Trio Libero, quite possibly the finest saxophone trio recordings of the new millennium, and one to rival previous ECM successes like bassist Dave Holland's Triplicate (1988) or saxophonist Jan Garbarek's Triptykon (1973). Trio Libero doesn't swing like Triplicate, nor does it possess the fiery free energy that so launched Garbarek's early career; instead, Trio Libero is an album of gentle freedom, spare but unfailing lyricism, and the kind of constant revelation that makes it a new experience with every listen.

With six of Trio Libero's thirteen tracks collectively credited, what's most special about the set is how it achieves that rarest of feats in free improvisation: true spontaneous composition—in-the-moment, yet possessed of a structure that belies inherent freedom and speaks to a deeper level of interaction. Sheppard's first release as a leader for ECM, 2009's Movements in Colour, was a more ambitious and preconceived affair; here, tracks such as the closing "When We Live On The Stars" possess immediate structure despite being credited to the trio, its folkloric melancholy coming from Sheppard's spare melodies, bolstered by Benita's utterly perfect choices and Rochford's deeply intuitive colors. There's no grandstanding here, only painstaking attention to the demands of the moment, though it's a certainty that in order to play music this selfless, all three players must possess tremendous command of their instruments.

Rochford, in particular, is a surprise and a delight. More extroverted in groups such as Acoustic Ladyland and Polar Bear, he's nevertheless proven himself contextually flexible. By no means imitative, but as a player more concerned with texture and implication, it's hard not to think of recent departee and ECM stalwart, drummer Paul Motian. If anything, Rochford is subtler still, his brushwork on a rubato look at Trio Libero's only cover, "I'm Always Chasing Rainbows," seeming tenuous at first—though never tentative—creating feather-light forward motion when connected with Sheppard's searching motifs and Benita's empathic foil. Sheppard's "Land of Nod" is more propulsive, opening with a drum solo as extroverted as Trio Libero gets, yet ever-gentle, even as Sheppard's melody line pulls on the waltz time to create delicate tension.

The two-part "Spacewalk" bookends five other tracks mid-way through the set, evoking a hovering stasis that develops almost imperceptibly, constructed over Benita's mix of arco and pizzicato, Rochford's cymbal swells and Sheppard's minimal tenor, which moves from low register to vibrato-laden high with unerring sense of purpose.

Rather than a demonstration of prowess, Trio Libero is proof that there's power in subtlety and drama in understatement—that tension can sometimes be found in the slightest of gestures. While time can only tell whether or not Trio Libero will actually achieve the status it deserves, Sheppard, Benita and Rochford have nevertheless created an album that stands apart from other saxophone trio recordings, a remarkable example of what happens when three masterful players check their egos at the door and surrender completely to the moment.