Ernie Andrews has a raw vitality that communicates instantly, he exudes a "reach 'em by preachin'" energy, influenced by his gospel roots. Born Christmas day in Philadelphia, his early years were spent in his mother's Baptist Church. In his early teens, his family moved to Los Angeles, where he studied drums at Jefferson High School and continued singing.

He was discovered by songwriter Joe Greene in 1947, when he won an amateur show at the Lincoln Theatre on Central Avenue in Los Angeles. Greene was so impressed that he immediately took Andrews into the studio to record at age 17. With a 300,000 seller hit, "Soothe Me" with "Wrap It Up And Put It Away" on the flip side, Ernie Andrews became a singer to be reckoned with. In 1953, he had another big record with "Make Me A Present of You" with Benny Carter. By this time, Andrews was working at home and out of town playing clubs, concerts and "after-hours" rooms.

In 1959, Andrews joined Harry James' band, touring the U.S. and South America for nine years, which time he considers his most valuable learning experience. In 1967, he recorded the jazz classic "Big City" with Cannonball Adderley on Capital Records. Obviously a fan and admirer, Cannonball Adderley stated, "When it comes down to the real nitty-gritty, there's Ernie Andrews." After the project with Cannonball, Andrews rejoined Harry James in 1968 for one more year before going it alone.

In 1969, Baltimore became home base for Andrews, where he worked the East Coast and the Midwest, again scoring big with his hit record of "Bridge Over Troubled Waters." In 1974, he returned to Los Angeles, where he resided with his wife of 50 years, Dolores, who recently passed away, but Ernie continues on, sharing the lives of his five children and grandchildren.

Early influences included Ella Fitzgerald, Billy Eckstine, Al Hibbler, Johnny Mercer, Jimmy Rushing and "Big" Joe Turner. Jazz producer Gene Norman said of Andrews, "Ernie is everything an outstanding modern singer should be. His sound and style have been influenced by his predecessors, but he contributes important values . . . uniquely his own." Several years ago Andrews returned to the scene of his prime — to the Gaiety Club across from the Lincoln Theatre — as his life was being profiled in an award-winning documentary, available on video, "Ernie Andrews: Blues for Central Avenue," directed by Lois Shelton.

For many years, Ernie continued to play clubs, concerts and jazz festivals throughout the world, and often performed in Las Vegas. In 1989, he recorded with Gene Harris and the Philip Morris Superband, "Live at Town Hall NYC" for Concord, and subsequently toured with the band for three months covering five continents. Engagements followed in 1991 and 1992 with Ray Brown at the Blue Note. In 1993, 1994 and 1996, he performed in concert at club venues all over the world, including Europe, Asia, Australia, and throughout the United States, Canada and South America. He performed with his own small group at the WBGO Annual New Year's Eve, which was nationally broadcast on National Public Radio. After a two hour stint with his own quartet featuring Aaron Graves on piano, Frank Wes on bass, and Kenny Washington on drums, Ernie then tore the house apart with a big band including the Heath Brothers, led by Jimmy Heath.

As he settled into later life, Andrews never flagged in his onstage enthusiasm, or lost his ability to focus on the emotions of a song. Some of his best work came in collaboration with artists of his time like saxophonist Houston Person. They collaborated on the 2003 album "Jump For Joy". Ernie Andrews passed away on February 21st, 2022 in a hospital close to Houston, Texas. He was 94. His daughter, Stephanie Williams, said the cause was complications of a blood clot that formed after he broke his hip in a fall.

Los Angeles Times critic Don Heckman said of a recent performance at the Jazz Spot in Los Angeles, "[H]e blends a hard-swinging, outgoing vocal style with a quick-witted sense of humor . . . he does so with a rich timbre, a gift for drama and a singular capacity to stimulate an audience," and "[H]e was a musical whirlwind, bringing life, love, humor and musicality to everything he sang."

A four-page discography includes 20+ albums, such as "This Is Ernie Andrews" and "Soul Proprietor," "Travelin' Light" with arrangements by Benny Carter, Gerald Wiggins and John Anderson; "From The Heart," and his recent releases "No Regrets," "The Great City" and "Girl Talk." He is also featured on numerous albums, including "Ellington Is Forever," Volumes I and II with Kenny Burrell; "Juggernaut" and "Juggernaut Strikes Again" with the Capp-Pierce Orchestra; "Paris All-Stars" with Jay McShann; and "You Can Hide Inside the Music" with the Harper Brothers (Verve). Having the ear to improvise and a rich resonant voice, Andrews plays his vocal chords as a musician plays his horn. He must be seen to be fully appreciated.

With his special strut, unique mannerisms and a performance that portrays the gamut of emotional experience, he consistently moved audiences to standing ovations. There's only one, and he's the best. 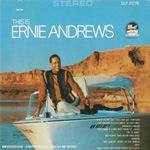 This is Ernie Andrews

Sings From The Heart 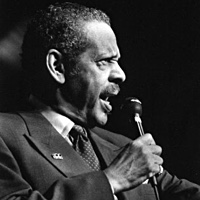 All About Jazz musician pages are maintained by musicians, publicists and trusted members like you. Interested? Tell us why you would like to improve the Ernie Andrews musician page.