Ernie Andrews has a raw vitality that communicates instantly, he exudes a "reach 'em by preachin'" energy, influenced by his gospel roots. Born Christmas day in Philadelphia, his early years were spent in his mother's Baptist Church. In his early teens, his family moved to Los Angeles, where he studied drums at Jefferson High School and continued singing. He was discovered by songwriter Joe Greene in 1947, when he won an amateur show at the Lincoln Theatre on Central Avenue in Los Angeles. Greene was so impressed that he immediately took Andrews into the studio to record at age 17. With a 300,000 seller hit, "Soothe Me" with "Wrap It Up And Put It Away" on the flip side, Ernie Andrews became a singer to be reckoned with

Larry Fuller: It's a Dream to Play with Ray

Born in Toledo, Ohio, Larry Fuller began playing the piano at the age of 11. The son of a factory worker, Fuller was the sole musician in his parents' blue-collar family. He earned his first big break in 1988 accompanying jazz vocalist Ernestine Anderson. Their musical partnership continued until 1994 when Fuller joined Jeff Hamilton's trio. ...

The National Endowment for the Arts announced today that The Jazz Bakery Performance Space will receive its fourth NEA Art Works Grant. This new award of $25,000 will support performances and youth outreach events as part of its “Concerts and Conversations with Southern California Jazz Legends” series. Artists invited to perform in this series include: Kamasi ...

The exciting opener of this CD--the high-swinging welcome of “I Love Being Here with You"--foreshadows the next 64 minutes of tight, crackling arrangements that are impeccably rendered and full of joy. The Clayton-Hamilton Jazz Orchestra, (CHJO) founded in 1985, has always been known for its full-hearted, world-class playing. The “L.A Treasures" of this title refers to ... 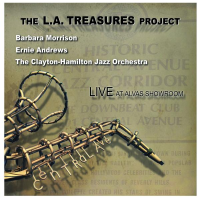 The “L.A. Treasures" heralded herein are singers Ernie Andrews (eighty-six years young when the album was recorded in September 2013) and Barbara Morrison (a relative novice at sixty-one). The idea to record sprang from rehearsals earlier that year by the Clayton-Hamilton Jazz Orchestra in which Andrews and Morrison were invited to sit in. Afterward, co-leader John ...

For nearly thirty-years now the Grammy-nominated Clayton-Hamilton Jazz Orchestra (CHJO) has been easily recognizable as one of the best big bands in the business. Led by bassist John Clayton, saxophonist and brother Jeff Clayton and drummer Jeff Hamilton, the group embarked on a mission to document their various rehearsals with West Coast vocal legends Ernie Andrews ... 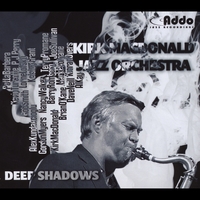 By Patricia Myers Tributes to Nat King Cole, Oscar Peterson,Chet Baker, Paul Desmond and the “Four Brothers" sound made famous by Woody Herman will be among the 44 sessions of the 12th annual Newport Beach Jazz Party, Feb. 16-19 in at the Newport Beach Marriott in southern California. This year's edition has the biggest advance sale ...