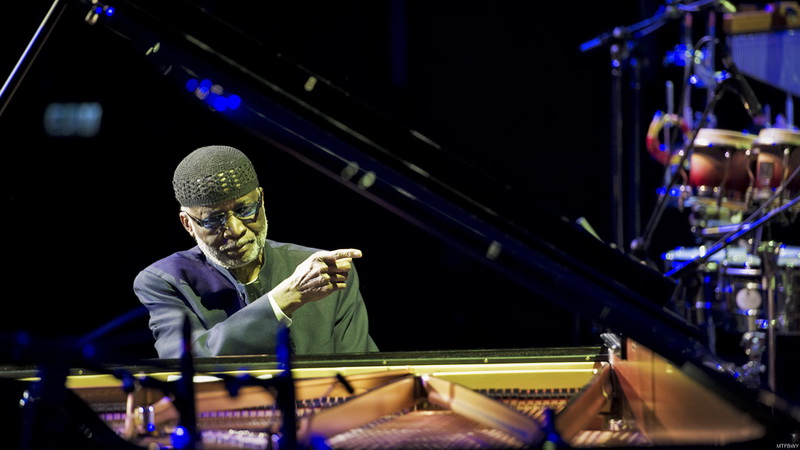 The 19th and 20th of May, 2012 will long be remembered by jazz lovers in Kuala Lumpur as the day jazz came to town. The 13 acts that performed on the stage of the KL Convention Center made history by inaugurating the KL International Jazz Festival. For those attending, feelings were of pride and a certain sense of relief that, finally, this great Asian metropolis was hosting an international jazz festival. After all, if Penang, Miri and Kota Kinabalu can all stage jazz festivals, then why not the Malaysian capital?

Managing Director Rodin JS Kumar and Executive Chairman Maizon Omar deserve great praise for showing the ambition and the tenacity necessary to pull this event off. Setting the bar high from the start, they pulled out all the stops in bringing the likes of pianists Ahmad Jamal and Hiromi to KL, not to mention tenor great Ernie Watts. Suitably enough in this cosmopolitan city, the festival balanced the best of Western and Asian jazz artists, and acknowledged the importance—both historically and in contemporary terms—of Malaysian jazz musicians from the get go.

Though the large hall was less than packed throughout, the organizers should take heart in the knowledge that mighty oaks from little acorns grow. Most festivals have humble beginnings. The Montreux Jazz Festival has grown from a few thousand spectators in 1967 to over 200,000 today. The Jarasum International Jazz Festival in South Korea almost folded after three editions, with director J.J. In forced to sell his house to meet the festival's debts; in 2011, Jarasum attracted over 170,000 spectators. And the world-famous Glastonbury Festival sold only 1,500 tickets for the first edition in 1970, compared to the 135,000 sold last year.

A shared characteristic amongst organizers of nearly all established festivals is an unerring belief in the music, and the determination to weather any storm. The organizers of KLIJF were already talking about the second edition, and spoke of their vision to establish KLIJF as an annual event of which the city can be proud.

The festival, it has to be said, got off to a somewhat low-key start. The 20-piece Dewan Bandaraya Big Band played a set of melodic numbers that sounded, in the main, like '60s TV series scores. There was undoubtedly some power in the full-ensemble sound, some fine individual playing, and on a couple of numbers the band swung, but it wasn't jazz.

The Dewan Bandaraya (Town Hall) was a major supporter of the inaugural KLIJF, and so there was certainly an argument for its inclusion on the festival program, but perhaps not as the opening act. Any of the other bands would have been better suited to give the jazz festival the flying start which surely everybody desired, and it felt like an opportunity missed. 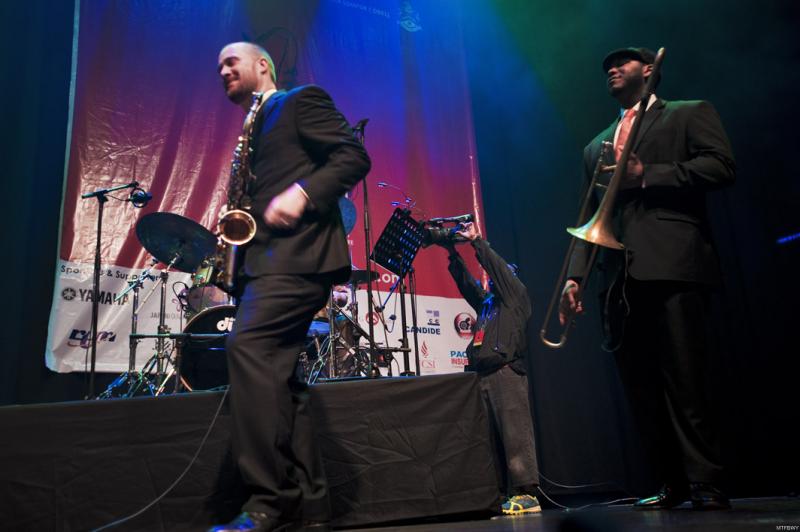 So, it was the Patrick Terbrack Quintet which really got the ball rolling on day one of the KLIJF, with a passionate performance of original, straight-ahead jazz compositions. Alto saxophonist Terbrack is a mainstay of the KL jazz scene, leading his own quartet and regularly performing with pianist Michael Veerapen and percussionist Steve Thornton. He's also played with drummer Jimmy Cobb, saxophonist Benny Golson and in the Gerald Wilson Big Band in a varied career.

"Standstill," from the leader's debut recording, Invitation (Interscope Digital, 2010), set the tone for what was to follow with its strong melodic contours, inherent swing and fine solos which never overstayed their welcome. Trombonist Marques Young and Terbrack carved beautiful harmonic waves on "Arthresian," with Jonathon Ho's walking bass steering the course. The young Singaporean bassist impressed throughout and is a name for which to watch out Pianist Gabriel Evans and drummer Daryl Irving also took lively solos. Terbrack's lyricism was to the fore on the slower "Phase 2," where he combined beautifully once more with Young.

The spirit of saxophonist John Coltrane's classic quartet infused "Malay's Revenge." Starting from a rhapsodic piano intro, the composition segued into a balladic, solo alto sax segment before a shower of bold piano chords rained down along with bristling drums. Saxophonist and trombonist locked horns in powerful unison lines with the rhythm section driving them on. Though an exciting soloist, Terbrack is a fine composer to boot, as the wonderful, slow finale to this number demonstrated. The alto player's gentle coda was supported deftly by Irving on mallets. The short and funky "On the Spot" took the quintet out in upbeat style and rounded off a classy performance.

The inaugural KLIJF would have been unthinkable without Malaysian piano veteran Michael Veerapen. For over three decades, Veerapen has been the leading figure in Malaysian jazz, and along with drummer Lewis Pragasam, was instrumental in organizing the very first jazz-rock concert here in 1978. With Patrick Terbrack taking the stage once again, having barely had time to wipe the sweat from his brow, Veerapen led his quartet through a technically impressive set of elegant, old-school charm. 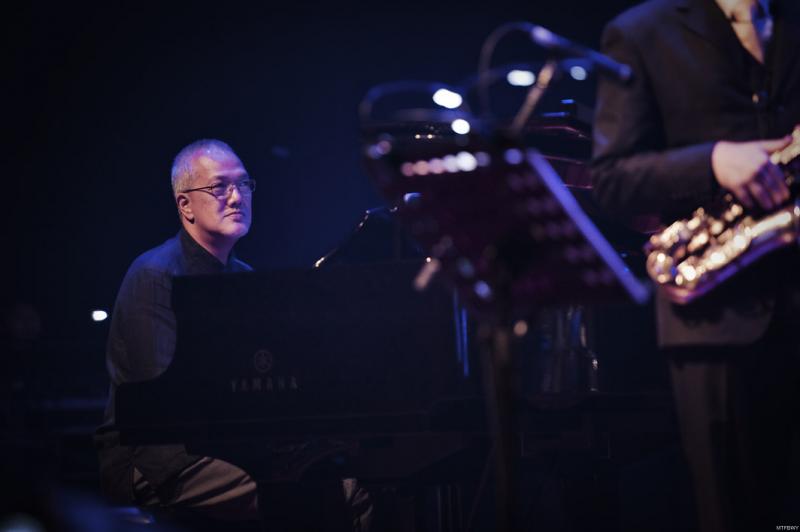 Pianist Chick Corea's "The Mad Hatter Rhapsody" opened the set, with Veerapen and Terbrack jointly stating the melody. Drummer Steve Nanda and electric bassist Daniel Foong kept light but propulsive time, providing the most solid of bases from which Terbrack on soprano, and then Veerapen, stretched out. Pianist Herbie Hancock's "One Finger Snap" followed, with Terbrack switching to tenor. Nanda and Foong had space to explore and both impressed with their poise and unflashy approach to soloing. Veerapen, though influenced by Corea and Hancock—two of jazz's tireless explorers---is stylistically closer to the generation of pianists that preceded them, and his light, breezy touch on the Brazilian-tinged "New Joy" was more evocative of Oscar Peterson's lyricism.

Judie Garland's "Come on Get Happy" began as a slow, gospel blues, before Delfino dug deep and led the quintet through a stirring, ensemble passage, with the endlessly inventive Terbrack once again impressing on alto. The finale, with Veerapen and Delfino in hushed dialogue returned the song to the intimacy of its beginning. Veerapen kept his improvisational best till last, pulling out all the stops on trombonist/composer Juan Tizol's timeless "Caravan." Individually, the members signed off with strong closing statements, and whilst the virtuosity on display was hugely satisfying, this was a concert that extolled the virtues of the collective most convincingly. 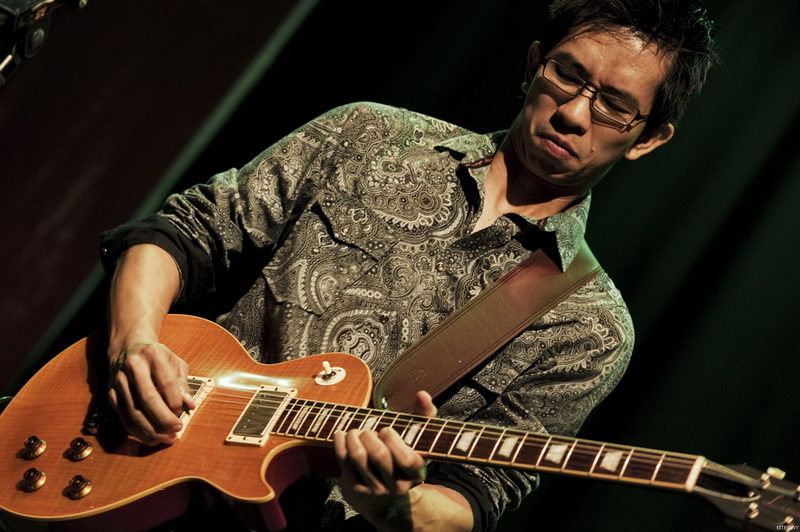 The DNA of jazz and blues are so inextricably linked that there's hardly a jazz festival in the world that hasn't some element of blues in its program. KLIJF was no exception. Perth-based Malaysian singer/guitarist Trevor Jalla underlined the fact that you don't have to be born in Mississippi or Chicago to play the blues convincingly. Jalla has a deep appreciation of the historical breadth of the music, and his band paid homage to blues giants like Willie Dixon ("I Just Wanna Make Love to You"}, New Orleans singer/guitarist Walter Wolfman Washington ("I'll Be Good"), and, his major influence, B.B. King ("Ain't Nobody Home"/"You Upset me Baby").

B.B. King informs not only Jalla's ringing guitar style, but also his stage patter. Jalla, however, has more than one string to his bow, and his set was colored by a crossover pop/blues sensibility epitomized by his version of singer/guitarist James Taylor's "Limousine Driver" and "Everybody Has the Blues." Hans Fiance' piano ostinato set up Jalla for a biting solo, which he sang along to wordlessly in singer/guitarist George Benson vein. "I Don't Need No Doctor"—the Nick Ashford/Valerie Simpson/Joe Armstead composition—has worked for everyone from pianist/singer Ray Charles and Humble Pie to guitarist John Scofield. Jalla's deep-funk groove had a bouncing intensity, courtesy of drummer Joe Whittle and bassist Roy Martinez, and the guitarist and Fiance on electric piano traded licks. Singer/guitarist Keb' Mo's "Dangerous" rounded off a crowd-pleasing performance and raised the festival temperature a notch.

The violin seems to have been underemployed in jazz over the years, but in the right hands there is no more captivating an instrument. New York-based Japanese violinist Meg Okura and her Pan Asian Jazz Ensemble beguiled the KLIJF audience with stunning arrangements of multifaceted musician/composer Ryuichi Sakamoto 's music, as well as a few equally absorbing original pieces.

Okura has a few strings to her own bow, having moved from classical violin to jazz following her move to New York. Her versatility has seen her collaborate with singers as diverse as David Bowie, Ziggy Marley and Terrence Howard, and saxophonists Michael Brecker and Lee Konitz. Okura has also performed in the internationally renowned Cirque du Soleil band. Add a number of film soundtracks to the resume and her role in guitarist Basya Schechter's exotic and wildly inventive group Pharaoh's Daughter, and it's clear that this is a musician with an open mind towards music. 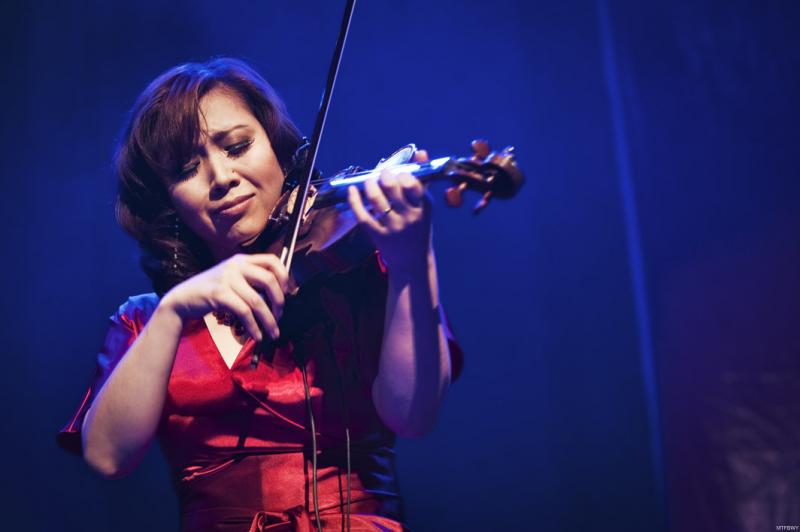 Okura's PACJE sounded equally compelling exploring Sakomoto's compositions from the influential electronic group Yellow Magic Orchestra as it did arrangements of his most famous film scores. Sakomoto's urgent "Riot in Lagos" was the perfect set-opener; its driving grooves and strong melody providing drama in abundance. Okura and pianist Helen Sung put down early markers as to the improvisational strengths of this band. Plucked violin strings created the sound of the West African kora on the intro to "Afrasia," from Okura and the PACJE's outstanding Naima (Self Produced, 2010). This seamless musical blending of continents featured Derzon Douglas, switching between plucked bass and arco, and a fine flute solo from Anne Drummond.

The interplay between Drummond and Okura was central to the group's sound, and combined warmth and almost ethereal lyricism with flowing, improvised lines of some intensity. Okura's solo intro to "Tango" was a classically-inspired flight of breathless virtuosity, soon giving way, however, to a lilting collective melodicism that conjured dimly lit dance halls of Buenos Aires barrios. Drummer E.J. Strickland's fat beat provided the backbone to the funky "F.T.M.F." Sung's animated piano solo set the improvisational bar high, but Okura raised it and then some with a wildly entertaining solo that was jazz and folk-influenced in equal measure.

Okura left the stage for five minutes to highlight her excellent band, and it navigated the Yellow Magic Orchestra's "Ishin denshin," creating a jazz waltz of a rather blue hue. Strickland on brushes set the mood as Sung and Drummond took turns to shine. Okura returned to the stage, linking once more with Drummond in a surge of warmth. Italian violinist/composer Niccolò Pagannini's "24th Caprice" morphed into a fiery Cuban son, the highlight of which was Sung's imaginative, unaccompanied solo.