For more than a century, a large number of immigrant Jews from Poland, Germany and Russia fled to the United States to avoid persecution. Many a son of a Jewish cantor became a singing star, or one of America's top lyricists and composers. Harold Arlen was such an example. He was the son of immigrants from the Vilna section of Poland, who wrote many of the top musical "standards" that will remain the favorite music of many generations. Born Hyman Arluck on February 15, 1905 to Samuel Arluck and Celia Orlin, he changed his name after he quit high school and began to perform professionally.

Arlen first learned to sing in his father's synagogue choir but most of his musical training and background was gained from his mother. By the time he was seven, he was regularly singing in Buffalo's Pine Street synagogue choir. At nine he studied piano with Arnold Cornelisson, who was an organist, composer and conductor of the Buffalo String Orchestral Society.

Arlen dropped out of Hutchinson Central High School and later Technical High School when he was sixteen. Afterwards, he began to earn his living playing the piano in silent movie houses as well as performing in a vaudeville act. He formed the Snappy Trio with two other teenagers and regularly performed in the brothel district in Buffalo. Two additional members were added and the group was renamed the Southbound Shufflers. The group was hired to play on Great Lakes' steamers. He was soon asked to joined the Yankee Six, another dance band that soon grew to twelve pieces and later renamed The Buffalodians. He served as the band's arranger, pianist, and sometimes singer. The Buffalodians became a favorite of the area townspeople and their engagements took them to downtown ballroom restaurants as well as college and other societal functions. Th group became so popular, they appeared in Cleveland and Pittsburgh. In 1925, they were given the opportunity to perform at various Broadway clubs in New York City

Arlen was noticed by Broadway and popular music composer Vincent Youmans, who gave him a part in the 1929 musical "Great Day" as rehearsal pianist. . It was there that Arlen established a long time collaboration with composer and lyric writer Ted Koehler. During a rehearsal they combined to write "Get Happy" and soon convinced the financial backers of the program that Arlen had great potential as a songwriter. "Get Happy" was subsequently used in 9:15 Revue and was made a major hit by singer Ruth Etting in 1930. "Get Happy," Arlen's first song, still remains a standard today.

In the early thirties, Arlen joined the music publishing house of J. H. Remick and also recorded as a vocalist with the big bands fo Joe Venuti, Eddie Duchin , Red Nichols, and Benny Goodman. He continued his collaboration with Ted Koehler and they combined to write revues for New York's Cotton Club. Arlen also served as the club's musical director. Classic standards were introduced during this time including, "Between the Devil and the Deep Blue Sea," "Stormy Weather," "I Gotta Right to Sing the Blues," "I Love a Parade," "I've Got the World on a String," and "Kickin the Gong Around." "Stormy Weather" was received so favorably, it led to Arlen receiving his first film contract.

Arlen wrote the music for three Broadway musicals from 1930-34. He departed for Hollywood where he continued for a decade to concentrate on motion pictures with the exception of one Broadway show "Hooray for What?". In Hollywood, he began his new collaboration with Johnny Mercer and they received Academy Award nominations for "Blues in the Night," "That Old Black Magic," "and `My Shining Hour." One of Arlen finest screen songs was "Last Night When We Were Young" and was written for the motion picture "Metropolitan" with lyrics written by Harburg. But the song was deleted as a vocal number and used instrumentally as background music. In later years it was recorded by Judy Garland and other vocalists but did not become a major hit until the 1950's when Frank Sinatra released it on the Capitol Record label.

On January 8, 1937, Harold Arlen married a former Powers model and show girl, Anya "Annie" Taranda, who had previously appeared in the 1932 edition of "Earl Carroll's Vanities." The wedding was held the day after he had handed her a note telling her that they were getting married the next day and didn't she think it was about time. He was a dapper figure and often was seen dressed sporting a cane as well as a flower in his buttonhole. The New York Times reported that, "he was known to get his ideas for songs in many places, while being driven in Los Angeles or while strolling around the Central Park Reservoir with his dog".

In 1939, Arlen was hired by Arthur Freed of MGM and joined E. Y. "Yip" Harburg for his biggest film success, The Wizard of Oz.The film featured such songs as "We're Off to See the Wizard," "Ding Dong, the Witch is Dead," "Follow the Yellow Brick Road, "and it's most famous song, "Over the Rainbow,". Arlen and Harburg were given a two month window to complete the score before filming and many years later he expressed how troubled he had been with the short amount of time to complete the musical score. In his biography of Harold Arlen, Edward Jablonski revealed that "Over the Rainbow" had come to Arlen "out of the blue" when Arlen and his wife had driven to a Graumann's Chinese movie theater on Sunset Boulevard in Los Angeles. She drove because he was too worried that he had not yet written a ballad for the film. When they reached a spot where the original Schwab's Drug Store was, the long lined melody came to Arlen. He quickly jotted it down in the car and the next day wrote both the bridge and the middle and presented it to Harburg to complete.

Harburg disliked it and remarked, "that's for Nelson Eddy and not for a little girl from Kansas." With advice from songwriter Ira Gershwin, Harburg changed it to a quicker tempo and a thinner harmonic texture and titled the song "Over the Rainbow." "Over the Rainbow" was presented to executives at Metro Goldwyn Mayer Studios (MGM); they remained largely unenthusiastic and three times tried to have the song cut from the motion picture. But each time producer Arthur Freed insisted the song be restored to the film. "Over the Rainbow" t received the Academy Award for best song in 1939. It also became a huge hit and signature song for fourteen year old Judy Garland. In 1963, "Over the Rainbow" was one of sixteen songs selected by the American Society of Composers, Artists and Publishers (ASCAP) as being one of the top songs of the first half of the twentieth century. Eileen Farrell sang it on the soundtrack of "Interrupted Melody" in 1955 and a decade later it was again used in the Metro Goldwyn Mayer (MGM) motion picture "Patch of Blue" that starred Sidney Poitier and Shelley Winters.

In 1941, Arlen and Savannah, Georgia native Johnny Mercer, and the grandson of a Confederate Army Colonel joined forces to write "Blues in the Night" for the film by the same name. It was a huge success and was vocalist Dinah Shore's first recording to sell over a million copies. It appeared on "Your Hit Parade" for 13 weeks, twice in the number one position. "Blues in the Night" was also nominated for an Academy Award but lost out to Jerome Kern's and Oscar Hammerstein II's "The Last Time I Saw Paris". Kern strongly felt that Arlen's song should have won the Academy Award and influenced the Academy's governing body to change the laws governing the nomination of songs. He was so successful that future considerations included focus on songs written for motion picture screen plays.

In 1942 Arlen and Johnny Mercer wrote "That Old Black Magic" for Broadway's Star Spangled Rhythm. The song became popularized by Billy Daniels and sold over two million copies. By 1943, "That Old Black Magic" had been recorded by many orchestras and vocalists including Charlie Barnet, Judy Garland, Frank Sinatra, Glenn Miller, Fred Waring and Margaret Whiting. That same year it appeared on the Hit Parade fifteen times and has been performed in many motion pictures including Here Comes the Waves in 1944, Meet Danny Wilson in 1952, Bus Stop in 1956. In 1958, Louis Prima/Keely Smith recorded the song and it received a Grammy Award.

1943 brought another standard to the popular music field when Arlen and Mercer again combined to write "One For My Baby" (And One More For the Road) for the Fred Astaire starred motion picture The Sky's the Limit. Frank Sinatra recorded it three different times and he sang it in the motion picture Young at Heart. It was also a major hit for Tony Bennett, Harry Belafonte, Fred Astaire, and Johnny Mercer. Lena Horne also made it a regular selection in her performances.

Arlen continued to concentrate on Broadway but never fully abandoned Hollywood and he received Academy Award nominations for "Ac-cent-tchu-ate the Positive" in 1944 with Mercer, "For Every Man There's a Woman" with Leo Robin in 1948, and "The Man That Got Away" with Ira Gershwin in 1954 . "The latter, a bluesy ballad Judy Garland performed in the remake of A Star is Born, was another classic song Arlen wrote for the silver screen. It proved to be Garland's second signature song and was frequently included in her repertoire that also included Arlen's "Over the Rainbow."

In 1959 his Broadway career came to an end with the failure of Saratoga. The cast was comprised of some of Broadway's finest with Howard Keel and Carol Lawrence in the leading roles and ran for only 80 performances before the lights dimmed for good. New York theater critic John Chapman wrote "My suggestion for the best enjoyment of Saratoga is that you stop trying to follow the plot before it starts and concentrate on the really good things."

In addition to the "standards" listed throughout, additional classic compositions include: "Happiness is a Thing Called Joe", "Hit The Road to Dreamland", "I've Got A Right to Sing the Blues," "Ill Wind," "It's Only a Paper Moon," "Let's Fall in Love", and the lovely song "A Sleepin' Bee" that is based on the Haitian folk belief from a story by novelist Truman Capote. All in all, Arlen composed music for over 25 films. He once confessed, "I wanted to be a singer. Never dreamed of songwriting." Harold Arlen died on April 23, 1986; he suffered from Parkinson's disease. On the day he was buried, it was reported by the New York Timesthat a strange phenomenon was sighted by several people: spectacular rainbows in the sky. All the rainbow reporters mentioned two facts: that they hadn't seen a rainbow in a long, long time and that April 25th was also the day that Harold Arlen was buried. Show less

The Music Of Harold Arlen This Week On Riverwalk Jazz

Harlem to Hollywood: A Centennial Celebration of The Music of Harold...

"The Wizard of Jazz"-A tribute to Harold Arlen with the Peter Hand Big... 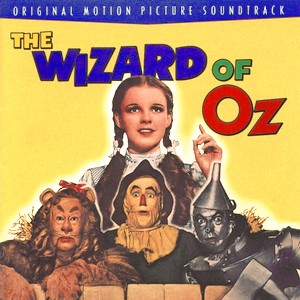 The Wizard of Oz

All About Jazz musician pages are maintained by musicians, publicists and trusted members like you. Interested? Tell us why you would like to improve the Harold Arlen musician page.