Barbra Streisand was born in Williamsburg, New York, to Emanuel Streisand and Diana Ida. Her father was a high school teacher, whose parents were Austrian. He died when Barbra was just 15 months old. Streisand has a half-sister, Roslyn Kind, who was also a singer. Barbra had a very turbulent relationship with her step-father, Louis Kind.

In her teens, Streisand won a singing competition and started to sing in nightclubs. She was keen to get into acting and appeared in a number of off-Broadway shows, including Driftwood, with Joan Rivers.

Barbra Streisand made her debut TV appearance on The Tonight Show, hosted by Jack Paar, singing 'A Sleepin' Bee' by Harold Arlen. The following year, she made her Broadway debut, in I Can Get It For You Wholesale.

Barbra Streisand's debut studio album, The Barbra Streisand Album, won two Grammy Awards and was released in 1963. She returned to The Tonight Show - now hosted by Johnny Carson - a number of times.

In 1964, Barbra Streisand starred as Fanny Brice in a production of Funny Girl. She continued her career as a recording artist, releasing almost of all of her albums on Columbia Records. During the 1960s, she focused on theatre and cabaret standards, such as 'Happy Days Are Here Again', which she performed as a duet on The Judy Garland Show. They were also joined by Ethel Merman, who sang 'There's No Business Like Show Business' with them.

At the end of the 1960s, Barbra Streisand began singing more contemporary tunes. Laura Nyro wrote the title track to her 1971 album Stoney End. Streisand remained a prominent feature in the US pop charts throughout the 1970s, with tracks such as 'No More Tears (Enough Is Enough)' with Donna Summer and 'You Don't Bring Me Flowers' with Neil Diamond. By the end of the decade. Only Elvis and The Beatles had sold more records than her, making her by far the most successful female singer in the US.

In 1980, Barbra Streisand recorded the album Guilty, which was produced by Barry Gibb of The Bee Gees. The album became her best selling album to date. Five years later, she returned to musical theatre, with the release of The Broadway Album, featuring tracks by George Gershwin, Rodgers & Hammerstein and Stephen Sondheim. Her live album, One Voice, was released the following year.

The 1990s saw Barbra Streisand focusing on her directorial career and she recorded very little during this time. In 1991, however, a four-disc box set of her work was released, entitled Just For The Record. She also performed at fundraising events for Bill Clinton's presidential campaign in 1993. That same year, she released Back To Broadway, which included a duet with Johnny Mathis.

Streisand's music career hit another quiet patch, until 1997, when she released Higher Ground, featuring a duet with Celine Dion. After the turn of the century, Barbra Streisand has released Christmas Memories, The Movie Album, Too Guilty and Love Is The Answer. The latter album is produced by Diana Krall. Streisand appeared on the hugely popular Friday Night With Jonathan Ross to promote the album, her British TV debut.

Throughout her career, Barbra Streisand has always taken time out from recording to focus on film work, whether it be acting or directing. In 1970, she starred in On A Clear Day You Can See Forever, directed by Vincente Minnelli. She went on to star in the comedy What's Up Doc? which also starred Ryan O'Neal, as did The Main Event. Barbra Streisand went on to win an Academy Award nomination for her performance in The Way We Were.

Barbra Streisand formed First Artists Production Company in 1969 with Paul Newman and Sidney Poitier. In 1972, she set up her own company, Barwood Films. She produced, starred in and directed Yentl in 1983 and carried out the same roles for 1991's The Prince of Tides and 1996's The Mirror Has Two Faces.

Diana Collaborates with Barbra Streisand on Her New Album 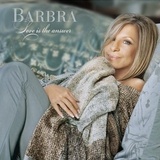 Love Is The Answer

All About Jazz musician pages are maintained by musicians, publicists and trusted members like you. Interested? Tell us why you would like to improve the Barbra Streisand musician page.