Born Hyman Arluck, February 15, 1905 Buffalo, NY, (died April 23, 1986 New York, NY of Parkinson's disease); son of Samuel Arluck, a Jewish cantor and Celia (born Orlin); married Anya (died March 9, 1973); children: Samuel Arlen. Education: Studied piano with Arnold Cornelisson, Conductor of the Buffalo String Orchestral Society. For more than a century, a large number of immigrant Jews from Poland, Germany and Russia fled to the United States to avoid persecution. Many a son of a Jewish cantor became a singing star, or one of America's top lyricists and composers. Harold Arlen was such an example

Ben Sidran, There Was A Fire

Pianist Bill Cunliffe was asked if he would be interested in doing a trio record with rhythm section legends {John Patitucci and Vinnie Colaiuta. Naturally he said yes, both immediately and excitedly. “Right now" was the answer when he asked when. Patitucci and Colaiuta were already set-up in a studio at Le Coq Records, and Cunliffe ...

Born Hyman Arluck on February 15, 1905, Harold Arlen was one of the most important composers of the Great American songbook. Arlen's first collaboration with lyricist Ted Koehler, “Get Happy," became his first hit in 1930 and ever since his tunes have been covered by jazz artists. In 2000, his collaboration with Yip Harburg, “Over the ...

12
Article: Anatomy of a Standard

Fain and Hilliard's “Alice in Wonderland" debuted in 1951 in a Disney feature film by the same name. Having been performed since then by Oscar Peterson, Bill Evans, Dave Brubeck, and many others, it has attained “jazz standard" status for good reason. The composition achieves a heightened value in the lovely marriage of music and lyrics ...

The Swedish jazz collective Jazzagenturen, founded by Pontus de Wolfe, reached deep into its collective soul and stood up to the downsides of the Covid-19 coronavirus early on. This large ensemble entered a studio on April 2nd. Twelve hours later they emerged having recorded fifty songs. The Stockholm Corona Sessions are being released in five volumes, ...

Gabriel Latchin Trio: The Moon And I 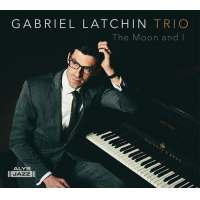 Following on from Gabriel Latchin's eponymous debut album Introducing Gabriel Latchin Trio (Alys Jazz, 2017), The Moon And I, recorded in London in February 2018, seeks to consolidate his position as a first rate straight ahead jazz pianist. Indeed his style is not dissimilar to George Shearing, Oscar Peterson, André Previn or Dudley Moore. As with ...

With a fat, rich tone somewhere between French classical trumpeter Maurice André and the flugelhorn of Chuck Mangione, Brad Goode has the ultimate calling card for a jazz player: An immediately recognizable sound. The fact that he's also got an upper register to rival Maynard Ferguson makes Goode one of the most underknown of jazz players. ...