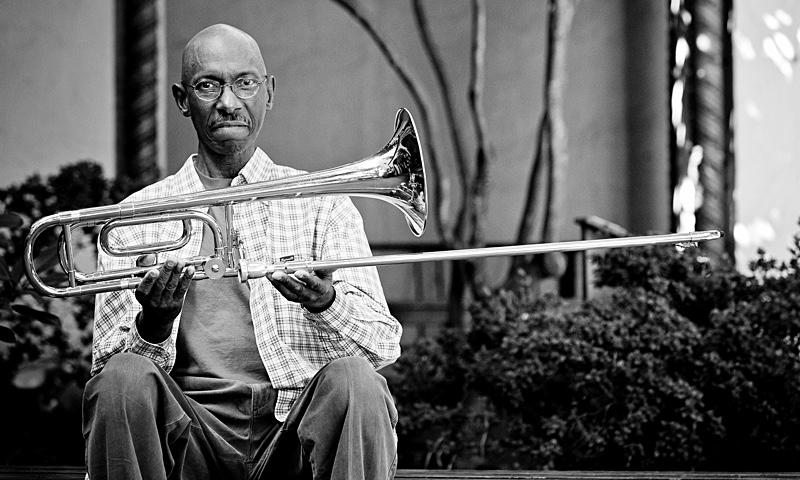 By PAUL RAUCH
December 8, 2017
Sign in to view read count

My task for the day was to interview legendary trombonist/composer, and jazz icon, Julian Priester. We had met a few times over my 35 years of frequenting the jazz scene in Seattle, coinciding with Priester's years teaching at the esteemed Cornish College of the Arts. In anticipation, I had spent nearly two months preparing, reacquainting myself for that which I already knew-that Julian Priester is a jazz legend that has played an amazing role in the evolution of the music. He has had the good fortune of being chosen to participate in some of the genre's groundbreaking recording sessions and live performances, spanning a remarkable 65 years. As a leader, he recorded in the late 50's and early 60's for Riverside, before cementing his legacy some 25 years later with the groundbreaking ECM release, Love Love (ECM, 1974).

I listened to it all. I read and listened to every interview available to me. Each interview basically fielded the same questions, with Priester responding thoughtfully, insightfully, brilliantly. I wondered what I could possibly add to this legacy, how could my time serve the music, serve the jazz public in a relevant and meaningful way. This lead to two conclusions on my part. First, Priester's words could have significant impact on young musicians, certainly my platform here at AAJ could provide that. Secondly, my task was in fact, easy. Simply allow Priester to speak.

At age 82, Priester is a master musician who speaks in a thoughtful, humble manner. Our conversation revealed a warm, intimate voice, enabling a relaxed, and focused forum for his amazing insights. His words suggest a staunch pride despite a lack of proper recognition for his transcendent accomplishments. His life journey has led him on stage and in the studio with the likes of Muddy Waters, Lionel Hampton, Dinah Washington, Sun Ra, Art Blakey, Max Roach, John Coltrane, Duke Ellington, and Herbie Hancock to mention a handful. He played on John Coltrane's Africa/ Brass sessions (Impulse, 1961), helped revolutionize jazz with Herbie Hancock's Mwandishi Band. I was humbled for the opportunity. And so I let Priester speak. His probing insights into music, into life itself, have tremendous value to us all. He is a worldly, historical figure, with enlightened social and intellectual refinement. His story seems to reveal a new window of wisdom each time it is discussed, shedding light on a clear path going forward, utilizing humanity as its prime instrument. I hope you dig.

All About Jazz: I have the good fortune to spend quite a bit of time with young jazz musicians. I am often amazed with their technical facility, but what I don't often hear in their playing is the blues, any connection in terms of their sound and musical dedication. I sense in your playing throughout your career, a deep connection with the blues. You grew up in Chicago, and as a teen, had the opportunity to play with some of the blues legends like the great Muddy Waters, and Bo Diddley. How did these opportunities come to be, and how did it embolden you to be yourself when you play?

Julian Priester: First off, let me just give you an idea of the environment I came into. I came from a religious family, a Baptist family, my Dad was an assistant pastor. As a child, I came up in the church, and the music from the church was part of my environment. We had a piano at home. Several of my siblings played piano, I was debating-I was the youngest of six. There was music all around. We would gather around the piano and sing hymns. My mother, and one of my sisters played piano, and one of my brothers was a jazz fan. My sister liked the blues, so we had a variety of musical styles in the house there. I was just excited, because of the excitement that was generated by my brother and his friends that would come over and listen to records. They would show energy, get excited with names like Bird, and Bud, Diz and Monk. These were fascinating names for an 8 or 9 year old kid. I had this dream, I would go to the piano and tinker. Before modern equipment came on the scene, before digital things, we had the old fashioned monologue, where you had to move the needle. Certain passages on the records, my brother and his friends would want to listen to over and over, so they would just take the needle and move it.

AAJ: I remember doing that.

JP: I would gravitate to the piano, and pick out the sounds that I heard, that my brother and his friends had played over and over. It would be one of Charlie Parker's riffs, or something like that. I could hear it. I had grown up around the piano, I didn't know technically what I was doing, but I knew the sound. From there, I grew, my ear was such that anything that I would hear, I could find on the piano. So that converted to being able to perform with other players, by ear.

On the west side of Chicago, all the clubs there featured blues. In high school, I had enough music in me that I wanted to join the jazz band, as a pianist, because that was my instrument at the beginning. The routine for the concert band at the DuSable High School in Chicago, was that everyone had to play in the concert orchestra. The concert orchestra also had the responsibility for playing at the sports games, mainly football. There was an event in the summer where they would dress the orchestra up in military uniforms, ROTC uniforms, and we would participate in the parade. This is where the change happened, because as a pianist, I was given a glockenspiel. Oh boy, I hated it!

AAJ: So that's when you decided to pick up the trombone?

I loved music so much that I didn't care about making money, I just wanted to play. I'd play for free. I would invade somebody else's gig, to get a chance to play some! (laughter) That's when I came into contact with Muddy Waters and Bo Diddley, just going from club to club, walking in with my horn.

AAJ: Getting to sit in.

JP: Yes. I would sit in, and after several times of sitting in they started paying me, without officially being a member of the band. I don't know what term to use to describe it, I guess I was a sideman.

AAJ: You have twice been a member of Sun Ra's band, the first time as a very young musician. What did you take with you, in terms of your personal approach to improvisation, from that experience moving forward in your career? How would you describe your playing style at that point in time?

JP: Yes, actually during the experience, I was young, I hadn't made up my mind exactly where I was. I loved bebop. I was confined to bebop, and I wasn't really playing spirituals, gospel music, but I had already absorbed that music from being in church. I was so bent on playing jazz, and developing a repertoire, it came about to not be embarrassed sitting in. I don't know if it's the same now, basically when I was coming up, they would put you to the task, just to test you to see if your repertoire was up to date. They would do things like call a standard song, for instance, "Cherokee," everyone played it, in a standard key. In Chicago, they would change the key without telling you, a half step from the standard. You wouldn't find out until you put the horn to your face and play the first note. You would think, " Oh wow, this is not right." And then to make the conversion to the different key, sometimes you did, sometimes you didn't. In order to keep from being embarrassed, I learned the songs in many keys. At the same time, I'm developing my own ability on the instrument. Technically, I had to not only just learn music, I had to learn trombone, which didn't take that long, because I already had the ear. I could hear.

Once I graduated from high school, I was ready for the big time in my mind. Without being afraid, I had a chip on my shoulder, especially towards saxophone players. Saxophone players get to the microphone and play a hundred choruses, and I'm standing there waiting. So I developed a technique where I would beat them to the microphone (laughter). I kind of carried that attitude with me for my whole career, just the aggressiveness. It really worked in my favor.

JP: One thing I have to give Sun Ra credit for is to put me in a position where he wouldn't give me much information about the technical aspects about the music he wanted us to play, he would just give it to us and say, "Ok, play." There was no written music there.

AAJ: There were no charts?

JP: No charts, but he would have maybe an idea or two. A phrase, and he would build it off that phrase. Then the rest of the band, John Gilmore, Pat Patrick, Robert Barry put me in a position where I had to use my ear, and I developed that ability which served me throughout my career.

When you get into a band and improvise, in the beginning, you plan the little stuff that you practice, things we learn in the practice room, and we get onstage and play those licks for one or two choruses, and after that you're out of ideas, you've exhausted your ideas, so your ear comes into play. You listen to what the general sound is and you identify it as far as the harmonics are concerned, and you react on the spot to the sounds that you are hearing. That's what I got from Sun Ra. That's what served me. It didn't dawn on me when it was happening, but later on I realized that Sun Ra really left me with a wonderful gift. I already had an ear, but in terms of the proper use of that ear in a performance is different from going to the piano and picking out one phrase that you've heard. You have to create a song.