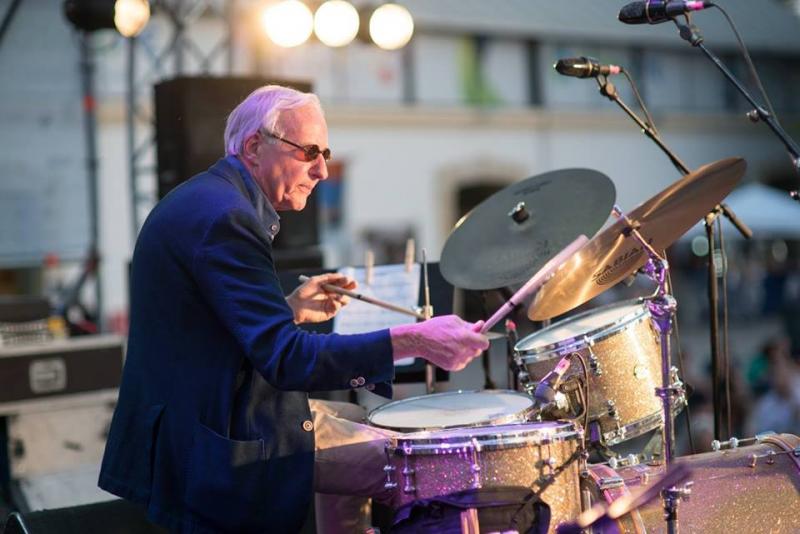 [This is the fourth of the All About Jazz series on "The Many Faces of Jazz Today: Critical Dialogues" in which we explore the current state of jazz around the world with musicians, journalists, and entrepreneurs who give us their own unique perspectives.

Jazz originated in America, but Europe has made and still makes an enormous contribution to the development of jazz. In this interview, Dutch drummer Eric Ineke reflects on the many faces of jazz in Europe past and present.]

Eric Ineke is a revered drummer from Holland who, among many other accomplishments, worked with giants like Dexter Gordon, Eddie "Lockjaw" Davis, Johnny Griffin, Ben Webster, vocalist Deborah Brown, and other American "expatriates" who made Europe their home during key points in their careers. Ineke is a professor in the jazz department of the Royal Conservatory of Music in the Hague. He performs at clubs and festivals in many European countries. In this interview, he offers a unique birds-eye perspective on jazz in Europe, then and now. Ineke came up in the bebop-hard bop traditions, and he remains an advocate of straight ahead jazz steeped in swing and the blues, so his perspective is strongly biased in that direction. Like his drumming, his comments swing strongly and are spiced with a personal touch.

All About Jazz: For a warm-up, let's do the desert island question. Which recordings would you take to that desert island? What are your favorite jazz recordings?

AAJ: Your response is interesting in that you don't include any European musicians.

AAJ: But all of the leaders are American.

EI: Well, that's because I grew up loving American jazz music. When I was very young, I heard this great music from America, and it was all swing, bebop, and hard bop. For me, it's still a great American art form.

AAJ: Jazz now includes all kinds of music and musicians worldwide. Do you think that most European musicians still think of jazz as uniquely American?

EI: Yes, I think that would be especially true of the musicians from my generation. With the younger ones, it depends. I've been teaching at the Royal Conservatory in the Hague for twenty-seven years now. The young students still listen to traditional jazz: bebop, hard bop, and so on. I encourage them to do that because for me, it's still the basic way to make jazz music. And they would come up with albums like I mentioned, with the addition of greats like Miles Davis of course. But a lot of them listen also to the new developments in Europe and America which is good and normal because you are part of the times in which you are growing up and what is musically happening around you. In the end it is up to them what they are going to do with it. But at least they are aware of the importance of the musical tradition, which will give them some added value in whatever direction they want to go.

AAJ: Would they also listen to an album by a European musician, say Toots Thielmans, Niels-Henning Orsted Pedersen, or Stephane Grappelli?

AAJ: This tells me that, at least from where these guys are coming from, jazz is still perceived as an American art form in Europe. This contrasts, say, with classical or folk music, where an American performer or composer would be on the same level with one from Europe.

EI: But jazz is truly American, because the swinging rhythm and timing is strictly American. And there's also the feeling for the blues that uniquely comes from America. I don't want to sound old-fashioned, but they still are the basic components, and when I hear the best players, they come across right away as having those ingredients.

AAJ: If you were given a "blindfold test" where we played a recording, and you had to identify whether the musicians are American or European, do you think you could tell the difference?

EI: I participate in a group of critics and musicians, and we do that twice a year. And my answer is, yes, mostly we can hear the difference. You can hear it in the time feel. But there are some players we can't tell whether they're European or American. For example, the saxophonist Ferdinand Povel from the Netherlands -you couldn't tell that he's European. And the same could be said of the pianist Rein De Graaff. He's a super bebop guy, and he's got the blues in there -his whole feeling is American. But with the drummers, there's definitely something in the sound that distinguishes European from American drummers. The American drummers have a full, fat sound. They are not afraid to go for it!

EI: They are really not afraid to hit it and to play it. That's getting better in Europe, but here only a few guys really have that sound on drums. I work with my students to get that sound and a great swinging groove in their cymbal beat, which -like playing with brushes -is becoming a lost art.

Ineke on Mainstream and the Avant-Garde in Europe

AAJ: Let's step back now and look at the big picture of jazz in Europe. Let's try to get an aerial view. Flying over the whole jazz scene, could you reflect for us about jazz in Europe? How's it going these days on the whole?

EI: I would have to say that on the whole, the feeling for straight ahead jazz, what I call the real deal, is getting less popular now. Most of the younger musicians feel they have to be innovators. They think they're geniuses, and they have to come up with something new. The problem is that what comes out most of the time is nothing.

AAJ: That's a very strong opinion! Are you referring to musicians in the avant-garde?

EI: To me it sounds more like improvised contemporary music. There's not what I would consider jazz in what they play.

AAJ: Do the musicians who are doing this kind of music first immerse themselves in the jazz tradition and master what came before them in this respect?

EI: My feeling is that many of them do not have a strong jazz background. And don't get me wrong; they can make some beautiful music. But for me, it's not jazz. It's improvised contemporary music. The whole jazz element is gone. The rhythm, the feel of jazz is not there. Timing and groove is the biggest problem in the schools anyway and this so called 'Contemporary Music' is for some of them a perfect escape route.

AAJ: Do you mean there's no jazz syncopation, and no blues?

EI: Right! In all fairness, there are some younger guys who are still doing it well. In every country in Europe, you can still find some guys who can play their ass off! For example, in Italy there are two great tenor saxophone players, Emanuele Cisi and Max Ionata. In Germany, there's the trumpet player Till Bronner. In Finland, there is Pekka Pylkkänen, a great alto saxophonist, Mikael Jacobsson, a great pianist, and Jussi Lehtonen, a wonderful swinging drummer. In Estonia, I played with an outstanding young bassist, Heikko-Joseph Remmel. In Ireland, there is a great tenor player, Michael Buckley. And also in Ireland, Ronald Guilfoyle, a great composer and bassist. His son, Chris Guilfoyle , is a monster guitarist and a perfect example of a young guy who has one foot in the tradition and one foot in the present. Austria has a fantastic young drummer, Peter Primus Frosch, and in Hungary there is another fine young drummer, Atilla Gyarfas. Both were students of mine with one foot in the tradition and the other in the present. These are great players, and they play with the real spirit, like what I experienced when I played with Dexter Gordon, Johnny Griffin , George Coleman, Eric Alexander, and all those guys from the U.S. That spirit, it's there from the first note on!

AAJ: But are they pushing the envelope, doing things that are new?

EI: Yes, and yet it makes me so happy to hear them. And then in Holland, we have a few young guys who can do it, like alto saxophone players Ben van Gelder and Tineke Postma and tenor player Gideon Tazelaar. These guys can really push the envelope into new territory. And then we have the legendary founding fathers of the avant-garde scene in Holland, like the late Mischa Mengelberg, and of course Han Bennink. But we also have some really great players who are deeply rooted in the Jazz tradition like the tenor players Sjoerd Dijkhuizen and Simon Rigter, alto player Benjamin Herman, trumpet player Rik Mol, and piano players like Rob van Bavel, Peter Beets ( his brother Marius is a great bassist), and Juraj Stanik.

Working with Dexter Gordon and Other Legends

AAJ: So there's no shortage in Europe of homegrown musicians who are steeped in jazz but breaking out into new things. But now let's take a little time to reminisce. I think our readers would love to hear a couple of stories about the American expatriate legendary musicians with whom you've worked, like Dexter Gordon and Johnny Griffin.

EI: The most important thing is that they were just such great people! They appreciated what I did, they stimulated it, and they always had a positive attitude towards me. They liked when I kicked their butts with my playing. Dexter played behind the beat, so he loved it when I pushed the rhythm forward with my drums to keep the momentum up. And Johnny Griffin would come into the dressing room and tell me I had to play the drums like Art Taylor. So once I started playing on top of the beat and kicked the bass drum we got along great.

AAJ: Did you socialize with them?

EI: Dexter and I hung out at my house and we talked about books, He loved Somerset Maugham's novels. Dexter was always a real gentleman. Johnny Griffin was a very uplifting person and a lot of fun. Johnny and I talked a lot about Philly Joe Jones.

AAJ: Did you see the film, Round Midnight, where Dexter played the leading role?

EI: That was the best jazz movie I ever saw.

AAJ: Dexter plays a composite of Bud Powell and Lester Young. Do you think that film was true to life?

EI: In my opinion, Dexter played himself in the film, even though he was playing the part of someone else. He was just like that in real life, when he was in my house, and when we were on the road. That was just the way he was. He totally played himself.