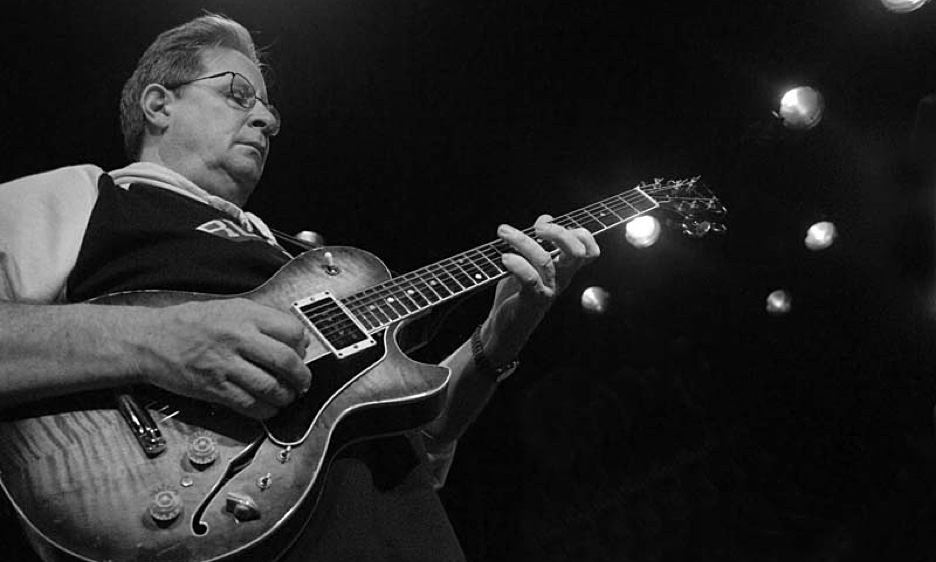 Vic Juris is one of the premier jazz guitarists in the business today. Perhaps less known than some of his peers, he is nevertheless admired by all of them and has accumulated, since his emergence on the scene in the 1970s, an impressive portfolio of live performances and recordings. His international career has included associations with the likes of Dizzy Gillespie, Phil Woods, Jimmy Smith, Don Patterson, Sarah Vaughan, Michel Legrand, Chico Hamilton, Dave Liebman, Gary Peacock, Richie Cole, Mel Torme, Eddie Jefferson, and the prodigal exemplar of the Django Reinhardt tradition, Bireli Lagrene. High on his list of creative gigs has been his association with the highly accomplished David Liebman Group since 1991.

Juris is also one of the leading jazz educators throughout the world. He has written two books published by Mel Bay, Vic Juris Inside/Outside: Original Play-Along Modern Jazz Guitar Solos and Modern Chords: Advanced Harmony for Guitar. Both books are highly regarded by up and coming guitarists. He currently teaches at The New School for Social Research, Rutgers University, and Lehigh University. He has conducted clinics throughout the United States and Europe.

Two outstanding qualities characterize Vic Juris' playing. One is his embodiment of the jazz tradition, while always stretching his scope and reaching for new possibilities and concepts. The other is his almost uncanny ability to hear and communicate the totality of the music he is playing, from beginning to end, including what is going on around him in the group and his many references to the jazz legacy. One could say that a good player is also a good listener, and Juris is an exceptionally good listener. Manifest in the artistry of his playing, this ability attracts the audience and gives deep coherence to his melodic lines and harmonies.

Juris participated in this interview with the same attention and freedom of movement with which he makes music. He was able to pick up quickly on questions and ideas, go his own way with them, and come right back to the center. He had no hesitancy in addressing whatever the interviewer had in mind, whether commonplace or esoteric. The result is both a unique sampling of what it is to be a working, evolving jazz musician and a cornucopia of information about the guitar and music in general, especially aspects of the jazz scene from the 1950s to the present

All About Jazz: For a warm-up, we'll start with the infamous desert island question. Which recordings would you bring to the proverbial desert island?

Vic Juris: What comes to mind is a The Beatles album called Rubber Soul (Capitol, 1965), which was one of the first all-acoustic albums I ever heard. As a kid growing up in the '60s, I was deeply moved by that record. Another would be Jimmy Smith and Wes Montgomery's The Dynamic Duo (Verve, 1966) with a big band. Then there would be Larry Coryell (Vanguard, 1969), his first album where he did some rock type things and did some trio work with Jimmy Garrison and Elvin Jones. Again, growing up in the '60s, I really related to what Coryell was doing. Still another would be Jimi Hendrix's first album, Are You Experienced? (MCA, 1967). It was some of the most powerful music I ever heard. If I had to pick one more, I would probably take John Coltrane's A Love Supreme (Impulse!, 1964). I thought he really broke new ground with that one. Looks like they're all from the '60s, but that's what comes to mind at the moment.

AAJ: Your musical interests seem to be more diverse than some other jazz players, who might pick straight-ahead jazz and one or two avant-garde things. Your choices include rock and popular music. Did you start out with rock bands?

VJ: That was the first type of music that I played. But in the '60s, we didn't have iPods and other high-tech headset devices. Everything was on television and radio. You'd hear the music blasted everywhere, in cars, storefronts, etc., so I picked up all the pop hits. At the same time, I was studying guitar with a teacher, Ed Berg, who was a jazz player, so I was getting both worlds. And at night, there would be the TV variety shows. So I was bombarded with both rock and jazz.

AAJ: In a way, rock 'n roll wasn't under your control—you were exposed to a particular environment.

VJ: For me, it was unavoidable. Even the school bus driver had on WABC, the top 40 station.

AAJ: When did you start hearing straight-ahead jazz?

VJ: Before the "British Invasion" of the '60s, I was already studying guitar with Ed Berg, a jazz player. To make a long story short, his studio was damaged in a fire, so I had to study at his house. When I'd go there, he'd have on an album by Johnny Smith or Django Reinhardt. And I was only about 11 or 12 years old, but I was immediately drawn to it. I asked Berg to teach me that stuff, so he started lending me albums by Barney Kessel, Jimmy Rainey, Jim Hall, Charlie Parker, Dizzy Gillespie and so on. He had a good collection. So he really exposed me to jazz that way.

AAJ: On a personal level, what was it like for you as a kid and teenager growing up in northern New Jersey?

VJ: We were originally from Jersey City, and then moved out to the country to Parsippany. And I didn't have any friends who were into jazz, so it was kind of lonely for me that way. Once I was in a music appreciation class in seventh grade, and I brought in a new release, Miles Smiles (Columbia, 1966). When the music teacher heard it, he scolded me and said, "Please don't bring anything like that in here again." So I felt, "Oh no, this jazz thing offends even music teachers!" And the kids didn't like it either. The reason I bought the record was that I read an article about Wes Montgomery where he said Miles Similes was one of his favorites.

AAJ: Unfortunately, there are those who don't take jazz seriously at all. When Clifford Brown was already making records and courting his wife-to-be who was a college student, she told him his playing wasn't really serious music. She said, "I'll take you over to my music professor's home, and he'll show you what real music is about." When they got there, the professor asked her to introduce her friend. She said, "This is Clifford Brown." The professor nearly fainted, and said, "My God, you're one of the greatest trumpet players who ever lived! I listen to your records all the time!" So the lady really took it on the chin, but she ended up marrying Brown anyway.

AAJ: Some of them, like Brown, condensed a whole musical life into a few short years.

VJ: Unbelievable! Charlie Parker died when he was only thirty-four.

Coming Up as a Jazz Artist

AAJ: For you, did your career germinate slowly, or did everything come together early?

VJ: I was doing rock until I was around 19. Then, a friend of mine introduced me to Eric Kloss—do you know about Eric?

AAJ: Yes, the saxophonist. He was blind from birth. I learned about him from Pat Martino. They're good friends.

VJ: Exactly. I met Eric, and he got me deeper into playing jazz. We hit it off as friends and shared a lot of common musical interests. He lived in Pittsburgh and started bringing me out there a few times a year. I also met Pat Martino around that time. Pat was really my first real mentor that I started hanging out with. I was playing at a little bar in Greenwich Village about 1976. Pat had just moved into the Village, so he and a friend of his wandered into the bar where I was playing with bassist Steve LaSpina. And Pat was my hero. Steve whispered to me, "That's Pat Martino there." So during the break we went over and introduced ourselves. Pat said, "What are you doing tomorrow? Do you want to come over?" Of course I said, "Yes!" And we became good friends, and we hung out, and I watched him work, and we met a lot of other people. Through Pat, I met organist Don Patterson.

AAJ: Pat worked with him, too. The organ-guitar combination is very generative. For Pat, his work with organists has been very influential and inspirational.

VJ: Pat is a master at playing with organ, as was Kenny Burrell with Jimmy Smith. Pat and Kenny are probably my two favorite guitarists to play with the organ. After working with Don Patterson, I did a couple of gigs with Jimmy Smith and some with Wild Bill Davis. Unfortunately, my experience with Jimmy Smith was difficult. He was very angry and confrontational with me. He went ballistic if you got a little bit more applause than him. By contrast, I really enjoyed working with Don. He was a true genius, a natural. His comping and suggestions were terrific. He was just a beautiful man.

AAJ: There's a wide variation among musicians regarding their degree of egotism as opposed to working closely with their groups.

VJ: Some are just interested in having the guitar back them up. But the best musicians are those who are looking for interaction.

AAJ: One of Martino's favorite terms is "interaction," in just the sense you mean.

VJ: A good jazz band is like the Harlem Globetrotters when they get in a circle and throw the ball around to "Sweet Georgia Brown." The best times are when you can't predict what's gonna happen next, but you know it's all good.

AAJ: Michelle Obama recently had some jazz players over to The White House, and she emphasized that jazz enables each musician to have his individuality while working well with the group. She posed this as a model for the young people who attended.

VJ: It's nice to have anyone from The White House talk about jazz!

AAJ: Jimmy Carter was a huge jazz fan. He had Cecil Taylor perform at The White House. Carter himself was a pretty good pianist. Of course, Clinton played saxophone, even on the campaign trail.

VJ: Some of the musicologists have actually transcribed some of Clinton's sax solos.

VJ: He only studied with Sandole when he was young, for about a year. By contrast, I had a teacher who taught me all the guitar basics, and then started to teach me jazz improvisation. In that respect, I had more formal teaching than Pat.