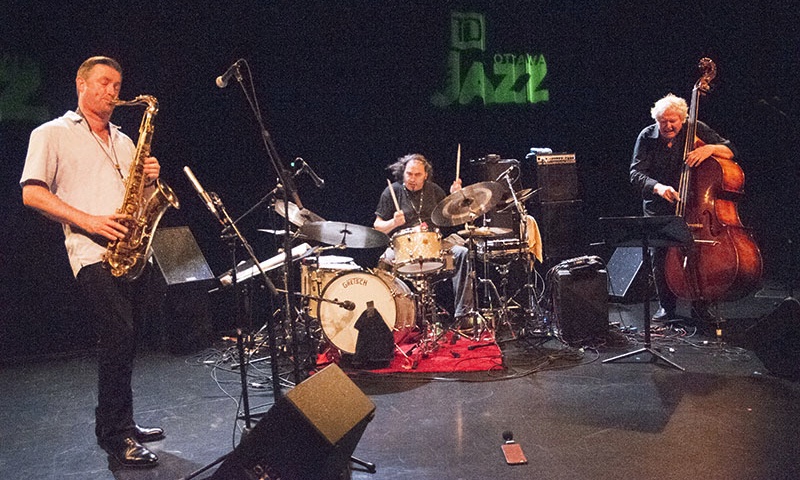 It's hard to believe, with seasons that move quickly from spring into summer, that it was time, once again, for the TD Ottawa Jazz Festival. Now in its 36th year, the festival has grown from a weekend event into a full-blown, 12-day festival with a broad cross-section of artists from around the world. The past few years have seen further growth, with the introduction of new series and a lineup that has slowly seen the festival address issues documented in an earlier All About Jazz article, When Is a Jazz Festival (Not) A Jazz Festival?, in particular the challenge of finding a way to draw a younger demographic that will ensure the festival's existence beyond its original and still-primary age group, the aging baby boomers and beyond.

Yes, the Main Stage at Confederation Park—where the festival can draw its largest audience—has become a more egalitarian blend of jazz, blues, pop, folk and more, diluting the purer jazz landscape of the festival prior to 2011. But with a bevy of outstanding artists performing at a number of venues in the adjacent National Arts Centre—ranging, this year, from the 140-seat NAC Back Stage (replacing the Fourth Stage, currently out of commission as the multi-venue arts venue undergoes major renovations) to the 350-seat Studio...and, for the first time, the 1,100-seat Theatre—there are rooms intimate enough to handle the smaller draws and large enough to suit bigger-name artists.

It may be true that some of the artists playing in the Theatre this year could be seen as suitable Main Stage fare but the truth is that getting the chance to experience artists like rising star Kamasi Washington, the reunited John Scofield/Joe Lovano Quartet, last heard in the mid-'90s until the release of Past Present (Impulse!, 2015), and singer Stacey Kent in the still-intimate Theatre undoubtedly made for a better experience, while artists like Sharon Jones and the Dapp Kings, Canadian singer/songwriter Sarah McLachlan, the New Orleans-infused funk of Trombone Shorty (still young, but already making his third appearance at the festival over the past few years), the perennial local favorite of Wynton Marsalis with the Jazz at Lincoln Center Orchestra, and piano legend Chick Corea's trio with Christian McBride and Brian Blade (who delivered a kick-ass Fall, 2010 performance at Dominion Chalmers Church as part of the festival's off-season program) were more appropriate fare for the park, where the festival has, on occasion, seen draws upwards of 10,000 people.

Meanwhile, the increasingly popular Improv Series was renamed the Discovery Series, but with the festival's knockout international cadre of artists, no matter what you called the series it was a certainty that the music would be as unpredictable and attention-grabbing as ever. Genre-busting The Claudia Quintet made its first, very eagerly anticipated TDOJF appearance, while a global representation of pianists coming from the UK (Alexander Hawkins), Poland (Marcin Wasilewski), the United States (Myra Melford, with her Snowy Egret group) and Israel (Anat Fort, in duo with Italy's renowned clarinetist/saxophonist Gianluigi Trovesi) covered even more stylistic territory. Meanwhile, saxophone trios from the sublime (Norwegian bass giant Arild Andersen's longstanding group with Scottish saxophonist Tommy Smith and Italian expat drummer Paolo Vinaccia) to the flat-out pedal-to-the-metal (fellow Scandinavian trio The Thing, featuring relentless Swedish saxophonist Mats Gustafsson alongside Norwegians Ingebrigt Håker Flaten and drummer Paal Nilssen-Love) gave brass lovers plenty to talk about. And for guitarists, there was, in addition to Scofield, the multi-brained seven-string guitarist Charlie Hunter—last seen at the festival in the late '90s when he was, himself, on the ascendance as a player who could play bass lines, melody lines and chordal accompaniment simultaneously—making a welcome return to Ottawa, this time, in a trio with maverick drummer Bobby Previte and trombonist Alan Ferber.

Reed fans were also happy to find Colin Stetson delivering two gigs at this year's festival: one, an intimate duo with Canadian violinist Sarah Neufeld, best-known as a touring member of Arcade Fire; the other, an ambitious 11-piece "Re-Imagining of Górecki's 3rd Symphony"—with a similarly open-minded lineup of three reed players, three guitarists and, one each, keyboards, drums, violin, cello and voice—looked like it just might be one of the festival's many surprise hits. In its cross-pollination of jazz and classical music—alongside Claudia Quintet's similar boundary-blurring mix of improvisation, contemporary composition and, at times even, progressive rock tendencies—Stetson's look at Górecki's music was just further evidence that attempts to pigeonhole jazz...or jazz festivals, for that matter...into a narrow space with rigid walls has become increasingly futile. And that's a very good thing.

While the festival's "official" opening date was June 23, the opportunity to bring Los Angeles-based tenor saxophonist Kamasi Washington to town was too good to pass up. Having released his ambitious and, perhaps, a bit more than audacious debut—the three-CD, three-hour, The Epic (Brainfeeder) just a little over a year ago—the saxophonist is also known in the hip hop world for appearances on albums including rapper Kendrick Lamar's To Pimp a Butterfly (Top Dawg, 2015). Since its release, The Epic—and Washington's career—have picked up steam, with largely effusive reviews and the beginning of rare honours like a cover story in the July, 2016 issue of Downbeat.

The real question was: could Washington deliver the same kind of energy and élan as on The Epic—where his suite of sixteen compositions (all sporting plenty of room to stretch out) was performed with, in addition to a core group drawing on a dozen members, a fourteen-piece choir and nine-piece string ensemble on some tracks?

The answer? A conditional yes.

For an artist whose visibility may be increasing rapidly but who is still a relatively nascent face on the jazz scene, it was not only astonishing to watch the 1,100-seat Theatre fill up to capacity in the thirty minutes leading up to the 8:00PM show; it was a welcome surprise to find a (for Ottawa) disproportionate number of younger people in the crowd. And they weren't just there because of the buzz; when Washington announced the second number, "Re Run," the amount of applause went beyond the merely polite to suggest that The Epic was known to a good number of people in the audience. And while Washington's music undeniably incorporates some of the more urban vibe of his other work, there's no mistaking The Epic for anything but a jazz record, with a near-encyclopedic view of the genre that is remarkable for a group of relative youngsters (Washington is 35); in its heavily orchestrated modality there are references to pianist McCoy Tyner's Song of the New World (Milestone, 1973), while the more electrified textures of Washington's keyboardist, Brandon Coleman, brought to mind '70s-era fusioneers Chick Corea and Herbie Hancock.

So, yes, The Epic is undeniably a jazz record...and appeals to a broad demographic ranging from dyed-hairs to gray hairs and no hairs. Washington's group—a septet first, with Washington and Coleman joined by drummers Tony Austin and Ronald Bruner, bassist Miles Mosley, trombonist Ryan Porter and singer Patrice Quinn, and then an octet, when saxophonist/flautist Rickey Washington came onstage mid-set for the rest of the performance—was clearly stoked and ready to burn from the first note.

Perhaps a bit too much so, if there were to be any criticism of the show. With two drummers, there was the potential to create a tumultuous undercurrent, and when it was effective—as it was, much of the time—it was really effective. Still, there were times when it was a bit much...as was also the case with Mosley's use of effects on his double bass: creating sonics rarely heard on his instrument, especially during an extended solo on his own "Abraham," the title track to the bassist's own upcoming album, due this fall, where he demonstrated impressive chops and an ear for expanding his instrument's textural potential; but other times creating a bit too much sound, resulting in a cacophony that was effective at times, but elsewhere could have used a little more space.

That Washington gave so much space to a tune from his bassist that doesn't appear on The Epic might seem unusual, but almost everyone in the saxophonist's group is a member of the "West Coast Get Down" collective; and every member of the collective is an in-demand player, striving to break down another boundary: that New York City is the centre of the jazz universe...rendering it difficult for jazz artists outside that city to garner the attention they deserve. Washington may be the first member of the collective to make a big noise, but with new albums in the offing by Mosley and pianist Cameron Graves—who may not have been a member of the touring group but appears on The Epic—it's hopeful that the strength of the collective...and the attention that Washington is bringing to it...will mean bright futures for the rest of its members.

Mosley also proved himself a capable singer on "Abraham," but it was Quinn, often seen whirling around with her arms outreached, who excelled at being a front-woman on the expansively anthemic "Henrietta Our Hero" and more buoyantly soulful set-closer, "The Rhythm Changes." When not singing lyrics, Quinn also contributed wordless voice to the group and, consequently, expanded the number of front-line melodic voices from four to five (when flautist/saxophonist Washington was onstage).

Washington proved a more than capable saxophonist, even on long-haul solos; and while everybody in the band was featured at least once—Coleman receiving a little more space than Porter and saxophonist Washington, delivering consistently imaginative solos whether on electric piano, a Keytar-like Moog Liberator synth or a definitively funky Hohner Clavinet—there was no doubt that this was the saxophonist's gig. His introductions to the material were relaxed, engaging and entertaining, with stories of his childhood helping to dissolve the border between audience and group, creating an intimate, relaxed vibe despite the occasionally overpowering nature of the music. And after delivering nearly two hours of music that ranged from modal workouts to booty-shaking, hip hop-infused groove-meisters, the standing ovation was so enthusiastic (even more than usual for already effusive Ottawa audiences) that there was no denying the audience a final tune, which broke mould by being, rather than a more relaxed tune that would ratchet down the crowd's energy, was instead a chops-heavy burner featuring a searing tenor solo from Washington.

One of the other questions was how would Washington create a road-ready group capable of performing music from The Epic and more, without the benefit of a larger core group and the added strings and choir? The good news was that Washington managed to scale down the music without losing any of its key ingredients. No, there was no choir or strings on "The Magnificent 7" but, with Quinn, the two Washingtons, Coleman and Porter, there was more than enough to deliver the key parts, driven with fierce energy by both drummers.