Theo Bleckmann. A jazz singer and new music composer of eclectic tastes and prodigious gifts, GRAMMY NOMINATED Theo Bleckmann makes music that is accessibly sophisticated, unsentimentally emotional, and seriously playful. His work provokes the mind to wonder, but connects immediately with the heart.

Singer. Bleckmann has released a series of gorgeous and irreverent albums on Winter & Winter, including recordings of Las Vegas standards, of Berlin kabarett, and of popular “bar songs” (all with pianist Fumio Yasuda), a recording of newly-arranged songs by Charles Ives (with the improvisational jazz/funk collective Kneebody), and most recently Solos for Voice and Toys, where Bleckmann brought just his stunning vocal technique, his emotional commitment, and his suitcase full of oddly evocative voice-altering gadgets to the project of recording delicate songs and poems alone at a monastery in the Swiss Alps.

Collaborator. In addition to his work as a soloist, Bleckmann loves to mix it up with other musicians. He maintains an ongoing creative relationship with guitar phenomenon Ben Monder, generating a series of performances and a pair of albums that wreak beautiful havoc with standard expectations of jazz and rock. With John Hollenbeck and Gary Versace, he makes up Refuge Trio, a project exploring and reinventing the work of popular singer-songwriters as well as generating provocative original work. With singers Peter Eldridge, Kate McGarry, Lauren Kinhan, and Luciana Souza, he forms Moss, a collective that plays in the sandbox of jazz, folk, and rock, building new ideas and compositions for voices. Bleckmann has additionally collaborated with a remarkable roster of contemporary musicians and composers, including Laurie Anderson, Philip Glass, Sheila Jordan, Michael Tilson Thomas, John Zorn, the Bang on a Can All-stars, and, most prominently, Meredith Monk, with whom Bleckmann worked as a core ensemble member for fifteen years. His uniquely flexible and colorful voice has also inspired compositions by, among others, Michael Gordon, Phil Kline, David Lang, Ikue Mori, Kirk Nurock, and Julia Wolfe.

Composer. Bleckmann's joyous, mischievous sensibility is also manifest in his compositional work, which leaves listeners feeling as if their usual chair had been moved over a few inches when they weren't looking - familiar things look fresh and strange again for a moment. He has composed for a range of instruments from piano, violin, and kalimba to chimes, Glockenspiel, toy microphone, and sewing machines, setting exquisite poems by Rumi, Emily Dickenson, and Kurt Schwitters as well as building ineffable soundscapes with just his voice and a loop pedal. His most recent compositional achievement is an evening of original work for voice and the JACK String Quartet, commissioned by the Slought Foundation.

Mad Genius. Bleckmann's approach to music and performance is unusual and provocative. His taste for risk-taking, coupled with rigorous technique, is clear in his unusual and varied ability as a sound improviser - an ability which is sufficiently in demand that he was commissioned to create the space alien language for Steven Spielberg's Men in Black. Bleckmann confesses to a love affair with performance art that informs his playful approach to music-making. Concerned that all senses be honored, he crafts each aspect of stage presentation (including expressive physicality and fabulous clothing choices) to create a context that completes and highlights the music. His thoughtfulness and articulacy about music and performance have led to recognition in unusual quarters, including a Fresh Air interview with Terry Gross and an article on vocal technique solicited for John Zorn's Arcana series, Volume III. Bleckmann's adventurous and extravagantly beautiful choices have led his work to be described as “from another planet” (New York Times), as “magical, futuristic,” (AllAboutJazz), “limitless” (Citypaper, Philadelphia) “transcendent” (Village Voice) and “brilliant” (New York Magazine), and left one critic wondering, “does he eat people food?” (AllAboutJazz). He has a gift for creating sounds listeners have never heard before, but pine to hear again. Show less

Theo Bleckmann: From the Fifth Dimension of Human Voice and Mind

John Corbert DOWNBEAT ”[Bleckmann's] a gifted singer (and twister) of songs, his voice flexible and rich, his phrasing sensitive and clear…, which makes his precise articulation such a treat.”

Phil DiPietro, AllAboutJazz ”Bleckmann possesses technique so colossal, yet so meticulous, he can seem otherworldly, an android-like embodiment of sci-fi vocalisms, a bodily vessel for that voice.

Francis Davis - The Village Voice Theo Bleckmann and Fumio Yasuda, Las Vegas Rhapsody—The Night They Invented Champagne (Winter & Winter). The most transcendent vocal album in many a moon (for my money, anyway) reminds me of Björk's Selmasongs. Bleckmann's voice and Yasuda's orchestrations have the same blissfully troubling emotional pull.

John Corbert DOWNBEAT ”[Bleckmann's] a gifted singer (and twister) of songs, his voice flexible and rich, his phrasing sensitive and clear…, which makes his precise articulation such a treat.”

Phil DiPietro, AllAboutJazz ”Bleckmann possesses technique so colossal, yet so meticulous, he can seem otherworldly, an android-like embodiment of sci-fi vocalisms, a bodily vessel for that voice.

Francis Davis - The Village Voice Theo Bleckmann and Fumio Yasuda, Las Vegas Rhapsody—The Night They Invented Champagne (Winter & Winter). The most transcendent vocal album in many a moon (for my money, anyway) reminds me of Björk's Selmasongs. Bleckmann's voice and Yasuda's orchestrations have the same blissfully troubling emotional pull.

Kyle Gann -The Village Voice, USA A frequent Meredith Monk associate, Bleckmann is a jazz vocalist with an amazing ear, a thorough knowledge of bebop scales, and absolutely no inhibitions, as likely to wail like a monkey off an augmented 11th chord.

Ben Ratliff, - THE NEW YORK TIMES, USA One strangely memorable tribute came from the singer Theo Bleckmann, who often sings without words, and as if he's from another planet. His arrangements for voice, accordion and drums of songs from the very old “Sisotowbell Lane” to the contemporary “Borderline” were so concentrated that the performance approached a seance. Some people take their Joni seriously; Mr. Bleckmann is one of them.

Neil Tesser - Chicago Reader, USA Vocal artist Theo Bleckmann provides a powerful incentive not only to attend but also to leave expectations at the door. 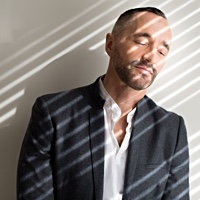 All About Jazz musician pages are maintained by musicians, publicists and trusted members like you. Interested? Tell us why you would like to improve the Theo Bleckmann musician page.