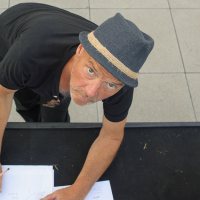 Balke continues to be a master of the selective keyboard intervention.
—Outland

Jon Balke was born in Furnes, Norway, and has been a professional musician since 1974. Balke has no formal education in music or composition and has mainly worked within the realm of improvised music. His main instrument has been the piano and this has lead, in time, to the use of electronic keyboards.

He began composing for larger ensembles in 1982, first and foremost for Oslo 13, a 'small' big band, and has since composed works for the theatre and various chamber ensembles, in addition to big bands and jazz ensembles.

Balke's activities in music have always been two-fold. On the one hand, there is a search for maximum spontaneity through the establishing of orchestras which are increasingly based on pure improvisation; a development that has culminated in his very successful trio Jøkleba with Audun Kleive and Per Jørgensen (keys, percussion, and trumpet). On the other hand, there is a search for thoroughly composed chamber music, with an orchestral expression that goes beyond traditional forms, which can be heard in the recordings of Magnetic North Orchestra and Siwan, as well as in numerous works for contemporary ensembles. Balke also has developed a catalogue of songs, resulting from cooperation with singers like Radka Toneff, Sidsel Endresen, Trine Lise Væring, Emilie Christensen and Mattis Myrland.

All About Jazz musician pages are maintained by musicians, publicists and trusted members like you. Interested? Tell us why you would like to improve the Jon Balke musician page.