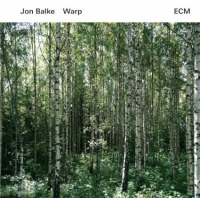 Best known for his Magnetic North Orchestra, pianist and composer Jon Balke has a background that is rich with global influences and diverse musical stylings. Trained as a classical pianist in his youth, Balke was playing with Masqualero on Bande à Part (ECM, 1985) by the time he was eighteen. That recording, in the company of Arild Andersen, Nils Petter Molvaer, Tore Brunborg and Jon Christensen, set some enduring musical relationships in motion, with all but Andersen going on to play in Balke's Oslo 13 debut, Nonsentration (ECM, 1992).

With forays into such cross-pollinated sources as Arabic poetry and baroque, stripped down solo piano, (played from the inside and outside) and multimedia projects that blend music and extreme sports, Balke has lived an unbounded creative life. On Warp he takes yet another creative approach with a mix of solo piano and augmentations that are cleverly placed below the surface. Along with every-day field recordings, vocals from Mattis Myrland and Wenche Losnegaard and spoken words from Balke's daughter, Ellinor Balke, are attention grabbing devices that lend a cinematic quality to Balke's playing.

The percussive "Heliolatry" is an improvisation augmented by subtle scraping; all of which floats into the ethos on the haunting "This Is The Movie." Broken up at mid-point, with a moderate flurry of notes, the piece dreamily drifts off. "Boldie," one of the more piano-only focused pieces, is classical in nature while "Shibboleth" is a more urgent avant-garde selection with the blurred spoken narration giving it an eerie quality. The effect of the distant vocals on the beautiful "Kantor" is completely engrossing and the piece lingers long after its conclusion. A second, extended, version of "Heliolatry" closes the album on a pleasingly spacey note.

Warp is a striking attempt to look at spaces, sounds and more traditional aspects of music working together. The shadowy elements that lurk below the surface are part of a thoughtful contemplation of the "place" of these characteristics within the music. Balke presents this experiment in the most appealing way; the subtle interactions are developed in a unique and organic manner and the net sum is one of Balke's finest achievements.