Meredith Monk is a composer, singer, director/choreographer and creator of new opera, music theater works, films and installations. A pioneer in what is now called "extended vocal technique" and "interdisciplinary performance," Monk creates works that thrive at the intersection of music and movement, image and object, light and sound in an effort to discover and weave together new modes of perception. Her groundbreaking exploration of the voice as an instrument, as an eloquent language in and of itself, expands the boundaries of musical composition, creating landscapes of sound that unearth feelings, energies, and memories for which we have no words. She has alternately been proclaimed as a "magician of the voice" and "one of America's coolest composers." During a career that spans more than 40 years she has been acclaimed by audiences and critics as a major creative force in the performing arts.

Since graduating Sarah Lawrence College in 1964, Monk has received numerous awards including the prestigious MacArthur "Genius" Award in 1995, two Guggenheim Fellowships, a Brandeis Creative Arts Award, three "Obies" (including an award for Sustained Achievement), two Villager Awards, two "Bessie" awards for Sustained Creative Achievement, the 1986 National Music Theatre Award, the 1992 Dance Magazine Award, and a 2005 ASCAP Concert Music Award. In 2006 she was inducted into the American Academy of Arts and Sciences and named a United States Artists Fellow, and holds honorary Doctor of Arts degrees from Bard College, the University of the Arts, The Juilliard School, the San Francisco Art Institute and the Boston Conservatory. Her recordings Dolmen Music (ECM New Series) and Our Lady of Late: The Vanguard Tapes (Wergo) were honored with the German Critics Prize for Best Records of 1981 and 1986. Her music has been heard in numerous films, including La Nouvelle Vague by Jean-Luc Godard and The Big Lebowski by Joel and Ethan Coen. Monk's publishing relationship with Boosey & Hawkes, begun in 2000, has helped make her scores available to a wider public.

In 1968 Ms. Monk founded The House, a company dedicated to an interdisciplinary approach to performance. In 1978 she formed Meredith Monk & Vocal Ensemble to expand her musical textures and forms. She has made more than a dozen recordings, most of which are on the ECM New Series label. Her music has been performed by numerous soloists and groups including The Chorus of the San Francisco Symphony, Musica Sacra, The Pacific Mozart Ensemble, Double Edge, Björk, and Bang On A Can All-Stars, among others.

Monk is a pioneer in site-specific performance, creating works such as Juice: A Theater Cantata In 3 Installments (1969) and American Archeology #1: Roosevelt Island (1994). She is also an accomplished filmmaker who has made a series of award-winning films including Ellis Island (1981) and her first feature, Book Of Days (1988), which was aired on PBS, shown at the New York Film Festival and selected for the Whitney Museum's Biennial. Both films were released on DVD in February 2007. A retrospective art exhibition, Meredith Monk: Archeology of an Artist, opened at The New York Public Library for the Performing Arts at Lincoln Center in 1996. Other recent art exhibits are comprised of a major installation, Art Performs Life at The Walker Art Center, a show, Shrines at the Frederieke Taylor / TZ' Art Gallery, inclusion in the 2002 Biennial at the Whitney Museum, ev+a 2002 Exhibition at Limerick City Gallery of Art and group exhibits Show People at Exit Art and Between Thought and Sound: Graphic Notation in Contemporary Music at The Kitchen. A monograph, Meredith Monk, edited by Deborah Jowitt was released by Johns Hopkins Press in 1997.

In October 1999 Monk performed a Vocal Offering for His Holiness, the Dalai Lama as part of the World Festival of Sacred Music in Los Angeles. In July 2000 her music was honored by a three concert retrospective entitled Voice Travel as part of the Lincoln Center Festival. Her most recent CD, mercy, was released on the ECM New Series label in November 2002. Monk's first orchestra piece, Possible Sky (commissioned by Michael Tilson Thomas for the New World Symphony), premiered in April 2003 in Miami and was performed by the Hamburg Symphony in 2006. Stringsongs, her first composition for string quartet (commissioned by the Kronos Quartet) had its world premiere at the Barbican Center in January 2005. Recent projects include a new work for the Western Wind Vocal Ensemble, and recording the music from her latest music theater work, impermanence, slated for release in 2008. Monk is also publishing a piano album of her scores and working on a new piece for her Vocal Ensemble in collaboration with visual artist Ann Hamilton. Show less 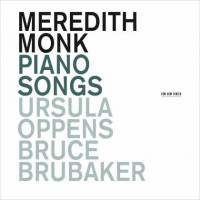 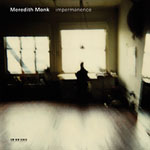 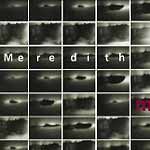 All About Jazz musician pages are maintained by musicians, publicists and trusted members like you. Interested? Tell us why you would like to improve the Meredith Monk musician page.