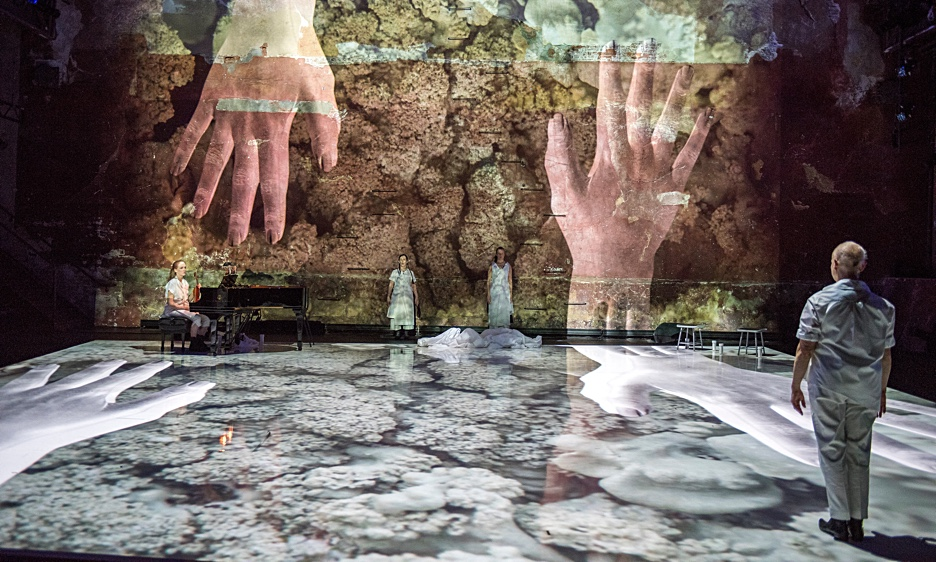 The multivalent Meredith Monk gave the world premiere of her Cellular Songs work at BAM over five days. Your scribe, burdened by a heavy rotation of electronic seances, live soundtrack silent movies and late night jazz jointing, opted for the Sunday matinee of this 75 minute song, movement, and visuals piece: its ultimate performance, at least for this run. Surely, by this time, Monk had squashed any bugs, yet was still reaping the benefits of the unfamiliar. Her works often appear neatly choreographed, but still possess an attractively natural unwinding quality, as if she's unselfconsciously finding her way, along beside the audience. This was a sold-out show, not surprisingly.

It could have been viewed as a 'budget' production, minimally arrayed, mostly without live musicians (aside from when one or two of the five singers turned to a brief violin or keyboard flirtation), lacking a 'solid' set, whilst relying on the naked elements of voices, movement, and vistas projected directly everywhere on the clinical stage environment, an ostensibly blank canvas. This was one of the barest exposures of the already distressed Harvey Theater's stage-area, with full brickwork backdrop. Of course, these aspects were soon filed away in a brain back-corner, as Monk set about captivating her willingly mesmerised gathering with those old fashioned, purist story-weaving conduits. Stark power struck, meaningful moods were set, and interpretations could swirl around in the receiver's own head-fluids.

With performers clad in simple white smocks, we could consider hospitals, or perhaps morgues. Death, disease and maybe rebirth were all indicated via these baggy chemical overspill protective outfits, especially when they were removed, and placed in an ordered heap. Various vocal ratios were explored, adopting the common Monk usage of ritual tribal hocketing, often sounding akin to the folksong interlockings of the far northern icy lands. Dance became inextricable from general practical a-to-g-to-n-to-q-to-z progressions. Creeping hands in minimal space, covering the video-hungry white floor-space (and brick rear), then a puffing collapse into a furry-creature-huddled group therapy. Monk's "Happy Woman" song was incongruous, but had greater effect due to its sprightly humour being surrounded by restraint, pauses, portent and stately symbolism. As Monk says in the programme notes, "to contemplate the ineffable is a wonderful way to spend your life..."

William Mason (drums, electronics, composition) is from Maine, and not so familiar in these New York parts, but he had Matt Mitchell on piano and Miles Okazaki on guitar, the quintet completed by Charlotte Mundy (voice) and Greg Chudzik (bass). A pile-up of vocal repeats lent an aspect of minimalist systems music, the instrumentalists adding to the intense riffing, the preference being for extended numbers. Mundy recalls a Philip Glass ensemble character in her voicings, exploring the gradual changes in ongoing phrases. It wasn't easy to denote which style the compositions were meant to settle on, featuring elements from jazz, electronica, rock, improvisation and moderne composition. This was a favourable quality, although calling it 'math jazz' might be helpful.

At the time of the gig, it wasn't yet revealed that this prime venue would be shutting down, just over a month in the future. Now, even the big, mainline joints aren't safe from the scourge of rising NYC rents, although B.B.'s was very conveniently placed, right on 42nd Street. Here was one last chance to catch these Fab blues greats in such an eminently suited environment. Soon, we will feel nostalgic, although apparently, the club is actively seeking an alternative Manhattan location. At least they ain't moving to Ridgewood, Queens, like everybody else!

King Solomon Hicks made a fine choice for opening act, operating on the soul front, just as much as the blues. His voice might be smoother and slicker, but his guitar playing has a tougher tone. His solos possessed more bite, with a note-bending vibrato. Most of the Hicks song selection were slowies, but there were fortunately one or two hard drivers included, closing up with "Killing Floor" and "Every Day I Have The Blues."

The Fabulous Thunderbirds are still fronted by prime mover Kim Wilson (vocals/harmonica), who is indeed the co-founder core of this long-running blues combo. His harp achieved maximum throatiness on "Baby, Scratch My Back," by the mighty Slim Harpo, assisted by a flooding guitar solo from Johnny Moeller. Wilson went for one last walkabout amongst the frontal tables, serenading with his unplugged harmonica, and even singing without the aid of a microphone. Fittingly, another high point arrived with their climactic reading of "Tuff Enuff," a confirmed Thunderbirds classic. It's still a swagger for swiggers! Extended harp and guitar solos sent the reasonably stacked (and stoked) midweek crowd off into the night, perhaps to return for the club's final set of gigs by Buddy Guy. There have been many revelatory nights in this King joint, many of them provided by George Clinton , plus such fellow groove-monsters as Bootsy Collins, Little Richard, Bobby Blue Bland, and Larry Graham (with a guesting Prince). Farewell, ol' weed-puffin' joint!!!