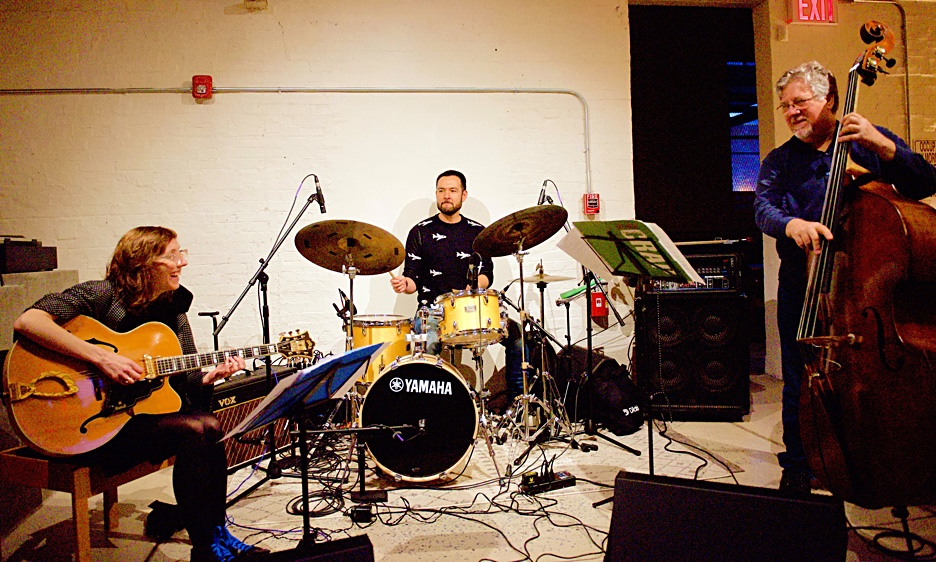 It's an old tradition, sometimes out of necessity, for artists to host low-key gigs in their own homes. The hyper-inventive and often powerfully percussive drummer Andrew Drury has been offering soup and sound for quite a while now, opening his front door in Lefferts Avenue, Brooklyn, to improvised music enthusiasts on a monthly basis. Not so surprisingly, Drury calls the series Soup & Sound, and this edition was #117, illustrating the ongoing success of his endeavour. It's been operating for a decade, but has recently become more of a regular occasion, as well as moving outdoors for some special summer events.

Mara Rosenbloom (piano) and Melanie Dyer (viola) had composed a new piece, "Bone Labyrinth," joined by Ken Filiano (acoustic bass) and Rashaan Carter (electric bass). With this slightly unusual line-up, flowing connections were made with flowery gestures, structured to house various relationships and permutations. Even though Filiano was playing an 'acoustic' bass, he was subjecting it to electronic effects, whilst Carter lobbed out a naturally thickened electric fluidity of his own. Filiano began a solo, with Carter running between his legs, weaving around with his own soloing matter. Rosenbloom guided her colleagues with an almost classical dignity, but Dyer's strings were set to abrasive, as she soloed with a sweeping eloquence. Filiano wedged small sticks between his strings, then Carter weighed in for a while, before cutting to near silence, leaving Ken to solo again.

Despite all of this individual action, Rosenbloom was providing much of the work's tactical structure, repeating small clusters as she travelled onwards. A bass duet evolved, and Rosenbloom looked puzzled for a while, until all four players briefly sprinted off together, then suddenly dispersed once more, eventually discovering a viscous, underwater character, emerging, or rather submerging in sound. Rosenbloom appeared to sacrifice her own solo potential in the name of organisation and foundation, seeming to allow her fellows to bear the weight of freedom, with their contained spurts of adventure, before returning to the framework of the composition.

The soup at this gig was tom kha gai, a Thai-styled concoction...

Public Records is a new Brooklyn venue, with an active musical presence, provided by regular DJs. Rows of vinyl lurk up on high shelves, and the speakers are big and woody-looking, fixed up near the ceiling. It also has a weekly Wednesday night jazz and improvised music series, with freebie admission and a sequence of quite renowned artists. On this early dry-run, prior to their liquor licence being granted, there was the feel of a prohibition den, although the white walls, pillars and sleekly minimalist design hinted at the open vending to come, in future weeks. Not to mention the serried rows of patiently waiting beer taps.

Thumbscrew is a trio featuring Mary Halvorson (guitar), Michael Formanek (bass) and Tomas Fujiwara (drums). They played two sets, the second highlighting their moodier, mysterious aspects. Halvorson's stealthy use of effects disrupted any potential guitar traditionalism, with her two-footed wah-wah dancing loading the tunes with an invigorating extremity. Fujiwara's scatter and tumble of drum propulsion married with Formanek's deep-sternum basslines. Thumbscrew sounded very warm in nature, considering the scale of the venue's brick interior, but there are multiple acoustic baffles lining the walls and ceiling of Public Records.

The DJ at this gig winkled out cuts by Codona and Jon Hassell...

Another fine music series is Uncharted, which trawls the genres wildly, embracing a variety of global sounds and styles. During its season-times, there are gigs happening pretty much on a weekly basis, at Greenwich House Music School, Thursday nights. Drummer Scott Kettner's Nation Beat is a long-established band that has run through several line-ups down the years, specialising in a particular splicing of traditional musics from north-eastern Brazil and down-south New Orleans. In Kettner's hands, this emerges as another kind of hybrid dance music, street-orientated, and always horn-loaded.

This show debuted a new collaboration with video/sound artists Jonathan Checler and Alan Friedman, who wrapped a panorama of carnival revelry images and sonics right around the concert room, on walls and behind the performers on stage. Besides the leader's own beat-core, the emphasis was on a perambulating horn vocabulary, ranging through sousaphone, trombone, trumpet and saxophone. The first number was decisively Brazilian, with some pronounced forcefulness from Joe Correia's sousaphone, directly stabbing down into the lower depths, before trundling into "Hey Pocky A-way," from the songbook of The Meters, 1974 vintage. Arranger Paul Carlon issued a screamin' tenor saxophone solo, with Correia giving a slippery sousa-reply. Kettner used loops to construct a section with kalimba thumb piano, pandeiro 'tambourine' and wooden sandal-clacks, providing a minimalist digression from the overall grooving force. There was an abundant cloaking with fx, then a spirited pandeiro solo and some hyper-speed triangle-ringing, over a loop of that Brazilian tambourine. Kettner eventually closed the set with a storming solo on his full drumkit, as the collective nature of the band paused to showcase its dynamic leader.

The freebie beer at this gig was Blue Moon...