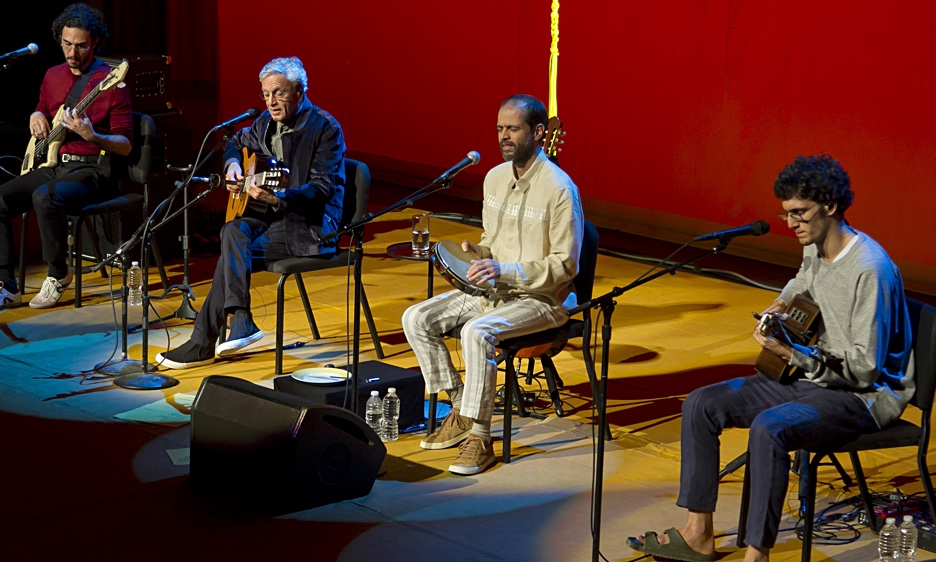 Always essential for the local Brazilian community, but also far beyond, into the general music enthusiast zone, singer and songwriter Caetano Veloso made one of his occasional visits to NYC, presenting the Ofertório show. Essentially, this involved his three musical sons, in an intimate almost-acoustic setting (just very subtle Fender Rhodes and a low-presence electric bass), simply savouring father's fine songs, from the last five decades. The juniors also got to contribute a few of their own compositions, and there was much swapping of instruments and leading roles, all peppered with amusing family banter.

This was the first of a two-night stint, looking pretty much sold out. The Veloso male clan consisted of Moreno, Zeca and Tom, mostly switching around between guitars and percussion (pandeiro or plate-and-fork), taking turns with vocal leads. The Lord Of Tropicália can manifest himself with either a fully-electrified guitar-rock combo, or a sensitively spuming all-acoustic crew, and he might also appear solo, or perhaps in a duo with Gilberto Gil, or in a small group setting. Caetano's literary tongue licks the textures of political grit and frothy love-soda, so he may be Brazil's Bob Dylan, but he's also its Jonathan Richman.

The show, low key but humorously intense, opened and closed with two of Veloso's lightest songs, "Baby" and "How Beautiful Could A Being Be," but there were many darker offerings during the course of these invariably short works, shaded by melancholy, miserable in intent, or filled with the questioning of religion. Caetano ensured an ironic poise, but was also strikingly forthright in his examinations. His numbers are always concise, cutting deftly to the core. Caetano is often sharp when he's being gentle.

Moreno has already spent around two decades investigating alternative approaches to the Brazilian tradition, but Tom and Zeca are younger, and also coming to music later. The entire family joked about their growing-up, and their relationship with songcraft, imparting an aura of homely intimacy on a large public platform. On a purely sonic level, the show could have sounded one-toned, at length, if the listener wasn't at least to some degree familiar with the songbook. Even with all the switching of instruments, the landscape remained quite level throughout. Talking of landscapes, the simple, striking stage backdrop looked like it might be part of some other BAM show, a theatrical or dance presentation, but no, it was specially designed for this tour, its sun (or moon) altering hues, fronted by a simple rope loop hung from the rafters. The Velosos also held a dancing competition during their set, with Caetano probably winning through subtle gesture and rubbery gyration. The juniors were still pretty good, though!

This was also an occasion of the Brazilian diaspora languishing in its special culture, as well as being a specifically special gig. We could imagine the Veloso living room (or even kitchen) being transported entirely to Brooklyn.

After Veloso and sons, there was still plenty of time to catch the late set from saxophonist James Carter at Birdland, where the second helping begins at 11pm, but usually gets delayed by around 15 minutes.

Hefting his glitter-coated tenor saxophone, the zoot-suited Carter rattled, steamed, seared, popped, growled and wailed through numbers by Jack McDuff and Eddie "Lockjaw" Davis. Gerard Gibbs delivered the full throat lozenge bass on his Hammond, whilst Carter ripped out notes in isolation, his percussive pauses almost as important as the actual phrases, before racing off with another dense spill of nimble escalations. The organ streamed, and Carter made gruff bites and barks, an enlarged showman of the free swing blurt. His playing was on the edge of being crazed, with such an abundance of energy still stored up for the late and last set.

Carter ruptured the structures like a free improviser (or free bluesman), but remained plunged in the post-bebop, or even sometimes pre-bebop tradition. It was as if Sun Ra had bloomed earlier on the Fletcher Henderson scene, or Lester Young had found complete abstraction in an alternate history. Carter picked up his baritone saxophone with his little finger, then made massive switches, from isolated tics to bloated burps, with Gibbs twitching percussively on the keys, his ghostly bass-feet workin' on the walkin,' like jazz used to be, before the studios got too slick. Carter started to shake his whole horn, talkin' into it, in an overblowing tunnel of supremacy, frying Birdland after midnite! He demonstrated the ultimate control of space, pausing before attacking, with a dynamism that gripped the ears in fists. Surprisingly, Carter used electronics towards set's end, tweaking his sound, kissing his tenor's butt just before the final magisterial solo of the night.

Robert Browning Associates present very regular global music gigs at Roulette, in Brooklyn. It's an outside organisation, with over four decades of activity, but with a close relationship to the venue. This was a part of RBA's fifth edition of A World In Trance, a mini festival devoted to ecstatic, ritual, orgiastic and plain old repetitive sounds. The sufi tradition in Pakistan is significant, and singer Hamza Akram is one of its rising exponents. Everyone sits in the shadow of Nusrat Fateh Ali Khan. Or the Sabri Brothers.

The elements of the qawwali form are fundamentally simple: voices, harmoniums, handclapping, and minimal tabla percussion. It's the relationships between these forces that provide the complexity. The Roulette crowd got into more than the usual degree of clapping witnessed at a qawwali gig, sounding suitably in time, as a long song would intensify, its beat accelerating. The actual handclaps within the six-piece ensemble were a touch too dry, flat and exposed, sonically, and would have benefited from a broader room sound. The secondary singers, Taimoor and Abdul Akram, provided more than the usual amount of introverted, sustained colourations, particularly during the exploratory preludes to each inevitable escalation of passion. The leader remained a key focus most of the time, but even the back row of cross-legged players were given their chances to emit bright lights. This was set to be a very lengthy gig, with the first 'half' approaching 90 minutes. It was time to hit Fat Cat, in Greenwich Village, for the Samuel Torres Astoria Salsa Company, as the Akram brothers were surely setting the controls for a three hour-plus performance..!

At 3pm on Sunday, the Museum At Eldridge Street often presents concerts that usually reflect its position as a leading institution for Jewish history. Their focus rests on this Lower East Side area of original immigration, and the preservation of the refurbished Eldridge Street Synagogue, first opened in 1887.

Reedsman Eyal Vilner was born in Tel Aviv, but has been residing in NYC since 2007, leading his 17-piece big band (formed the following year) in a mission to perform original works that are nevertheless imbued with some old-school swing-isms. Vilner uses old Jewish material, but the results don't exactly sound like klezmer. Jazz remains the dominant palette.

This gig acted as a preview for the band's next album, Swing Out!, opening with the brash blast of "Downhill," with Vilner himself soloing, straight off, before turning around to conduct, then offering an alto spot. Next up, Martina DaSilva led a vocal number, "Dinah," and this initial flourish finally quieted down for a brief moment of aural digestion. Vilner led a clapping party for "Saint Louis Blues," and just as the first rush of repertoire was sounding somewhat predictable, he introduced his own tune, which sounded like it was called "Tap Tap Tap." Vilner maintained the self-composed slant with "Going Uptown," these originals still keeping well within the vintage swing style. This one acted as a showcase for a full line of flaring trumpet section solos (including Brandon Lee and James Zollar), then the band's second singer, Brandon Bain, went "Around The Corner From The Blues," his lower tones travelling more easily around the high-vaulted walls than DaSilva's, which suffered from too much trebly reverberation. A set stand-out was "The Rat" (again, this was how the title sounded), where almost everyone in the band was awarded with a brief solo.

At 6pm on Sunday, it was now time for solo snare drum and flatulent balloons. Oh yeah, and a reinforced groin-guard. Such are the pleasures to be found deep down in the Chinatown basement of DMG, one of NYC's last bastions of record store-dom, and the heavily alternative type to boot. Almost every Sunday at 6pm, we can catch one, two, or sometimes even three freebie sets of unlikely music, programmed by main man host and multi-format music crusader Bruce Lee Gallanter. On this particular eve, it was the bumper triple-header incarnation.

Percussion improviser David Grollman is a DMG regular, mostly as a public being, but sometimes as a performer. He started the early evening run, with a basic snare drum as his core instrument, but also as a small platform for extra devices, whether metal, wood, plastic or other, to be scraped, dropped, rubbed, clattered or slapped on the skin-head. He also employs balloons as frequent ballast, like low-budget trumpets, or high end farters. Compared to much of Grollman's solo improvisation, this set found him in a more volatile state, declaiming verbally, making sharp observations. He talked about dementia, although not yet his own, but a recent concern around his circle of being. Grollman's inventions had a razor edge, not least when he disrobed down to his underwear, using his groinal area as landing point for small gongs, in the rapid percussive sense. Fortunately, it sounded exactly as though he had a tough genital carapace in place, guarding against damage, but also providing a variety of tones. Grollman caused smiles to smear around the basement, but his performance was also troubled and sonically extreme.

A duo of comparatively well-behaved improvisers followed, courtesy of Drew Wesley and Dave Zakarian (guitar and alto saxophone), and then the English vocalist Viv Corringham was booked to duet with the Austrian violinist Mia Zabelka, who couldn't make the gig. Instead, all four artists (Corringham, Grollman, Wesley, Zakarian) made an impromptu grouping, turning this into a fine three hour session of sparked free-forming. When Grollman sputtered high rubber, Corringham sounded just like she was blowing on a folded leaf, whilst Wesley hard-scraped strings and Zakarian pierce-squealed high, in the post John Zorn / Derek Bailey language.