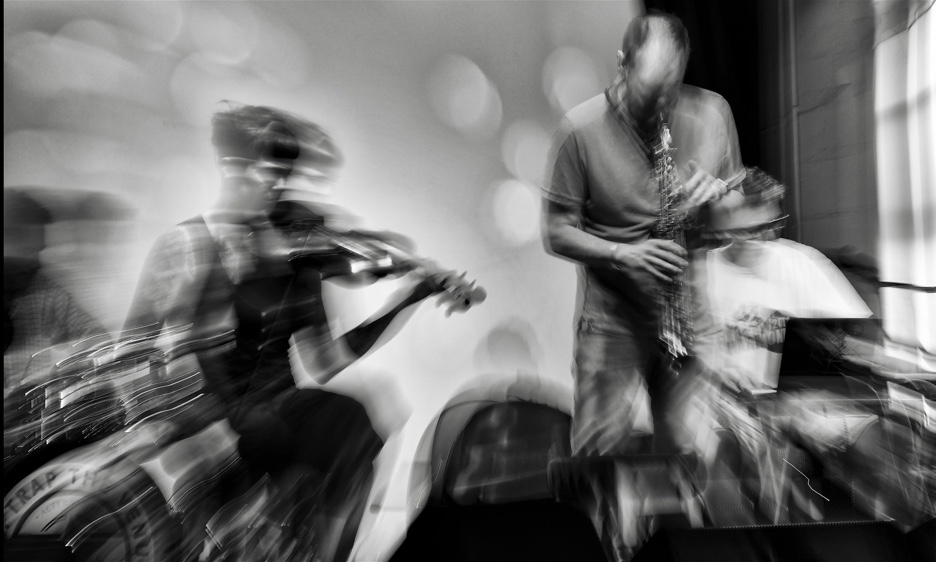 Promoter Richard Clay has long been a committed supporter of the Birmingham free jazz and improvised music scenes, and has recently initiated a series of gigs at the Claptrap venue in Stourbridge town in the West Midlands of England. A culmination of these activities came during his Stourbridge Festival Of Improvised Music, an all-afternoon sequence of multiple sets from permutations of players mostly found on the local scene of Birmingham and surrounding environs.

The opening set acted as an introduction, presenting most of the performers in a single grouping, saxophonists Paul Dunmall (a fresh concentration on alto!), Bruce Coates (alto also) and Xhosa Cole (tenor) at the vanguard. Coates is also a seasoned organiser, having operated improvising gigs in Birmingham for the last two decades. Cole is a rising star, and winner of the BBC Young Musician Of The Year award, towards the end of 2018. The rest of the group included Steve Lawson (electric bass), Trevor Lines (acoustic bass), Sarah Farmer (violin), Steve Tromans (upright piano), Andrew Woodhead (keyboards) and Alicia Gardener-Trejo (baritone saxophone). There was an electronic surround for the bustling, busy horns, with trumpeter Aaron Diaz also using effects. A brooding, cumulative swaying evolved, with movements frequently submerged, until a collective rising up from the depths developed.

The second number featured a horn quartet, with Dunmall, Cole, Trejo-Gardener and Coates (the latter on soprano), producing a running cascade of sensitively conjoined notes and phrases. The baritone sounded bassoon-like at times, and (was this an illusion?), there were waves of motion from left to right, and from low to high. Thirdly, a quintet formation highlighted muted wah-wah trumpet, guitar neck hammering (Phil Gibbs) and a 'pure' violin sound, with singer Anabel Bloomfield becoming fully integrated into the tonal spread, rather than separated out into a 'jazz scatting' role.

Following a break, the fourth improvisation welcomed drummer Mark Sanders, along with Tromans and Cole. Next up, Dunmall's tenor was prominent, with Woodhead issuing spiny spirals and Gibbs providing spindly guitar parts, via a very effective 'lap steel' approach. Again, towards the climactic section, Dunmall took the soloing lead.

The following piece revolved around Coates, his soprano fluttering around the energised contributions of Farmer (on viola), Woodhead and Sanders, with his driven bass drum rumble. A soft, sparse, subtle interlude evolved, with Sanders removing a cymbal for use in a rotary skin-rubbing episode, making glancing hits on a woodblock. Meanwhile, Farmer's faint viola strafes and flicks interrupted the soprano cycling. The eighth adventure had Lawson playing lap bass, with bottleneck, whilst Tromans tolled out the pub reverberance qualities of his upright. Lawson walked his strings, as the horns chattered and burbled, Dunmall blasting and blurting with awakened power, and a clipped severity. The lap guitar of Gibbs wore Fender Rhodes robes, as Dunmall released some pent-up energy, the aggressive finale involving all players once again. This closing explosion climaxed with a bass electronic repeat being mirrored by violin, and building to a runaway player piano-styled circulation from Tromans, the horns then returning en masse.

As the afternoon progressed into the early evening, Clay refined his role as garrulous emcee, with stentorian announcements, as if he were running an odd sort of auction. Excitingly, Clay already has a few more Claptrap events in the pipeline, including a third edition of this mini-festival.