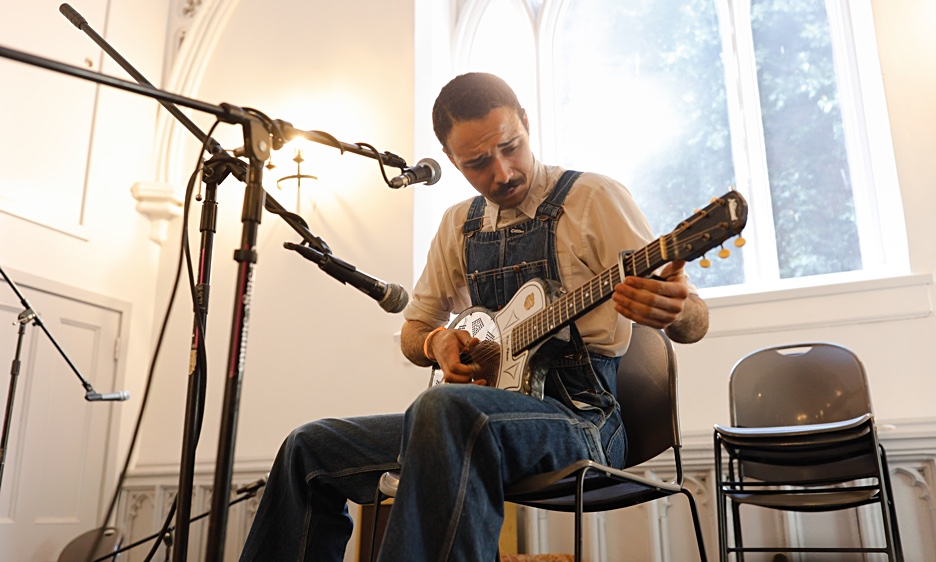 The Brooklyn Folk Festival takes place at Saint Ann's Church in Brooklyn Heights, but it's organised by the folks at Jalopy in Red Hook, that lively haunt of every type of roots music, an inviting home for both performance and teaching activities. Jalopy is a small venue, but this three-day festival called for way more space, managing to fill the main church, as well as the entrance area, with its secondary Parish Hall Stage. As we're in NYC, the audience look is a complete mix of authentic downhome gear, plus fashionable Brooklyn variations on said dungarees, beards, tattoos and print dresses. Banjos have rarely been so kool, despite several of their wielders feeling the need to joke about, or even apologise for, their chosen instrument. Seriously, though, we were all there for the hardcore folk tradition, circulating from bluegrass to country blues, jazz swing to Western swing, cajun to zydeco, avant folk ambiance to sacred steel strings, and even some ska and 1960s-derived, mildly psychedelic pop.

The Friday night got off to a heady start with Georgia bluesman Jontavious Willis, followed by The Revelers, as part of the second stage's Louisiana Dance Party, amalgamating the songbooks of the cajun and zydeco traditions, in a swampy style. But it was on Saturday and Sunday that the full noon-til-midnite programme came into force.

The Brotherhood Of The Jug only actually featured a single jug-huffer, along with harmonica, guitars, fiddle, banjo, frottoir and impressive giant banjo-bass, dominated by blues, but making a Mexican diversion for a song that combined romance and martial arts.

Nate Polly and Rich Kirby sang songs from East Kentucky, with guitar and fine-filament mandolin micro-solos, delivering "Cold Black Coal" with a delicate quaver to their harmony vocals. The pair switched lead vocal roles, for "Old Jim" (dedicated to a mule) and a song that might be called "Mama's Out Of Prison (But Daddy's Back In)."

Barry Clyde sported dungarees, moustache and steel guitar, electric, but with exceedingly muted strings, giving him a distinctive sound to his unwatered country blues. On his neck-rack hung a kazoo, providing a few convincing solos over Clyde's cutting strums, a restrained hint of a gargle at the back of his throat. He offered a particularly hard-edged reading of "Saint James Infirmary Blues," closing out in style, with just an open microphone on his strings, the guitar not being plugged in to an amplifier.

The Lovestruck Balladeers made their debut, featuring multi-instrumentalist Dennis Lichtman, also a longtime member of Brain Cloud, who were to play later on the Saturday evening. This smartly besuited quintet are preparing their first album, and the stance is one of refined smoothness, perfect for playing at functions, and for easing outsiders down to the rootsy shoots. There was a classicist sophistication at play, but frequent fiddle solos flew out of the extremely bushy beard of Aaron Jonah Lewis, even though the general instrumental band-balance was quite restrained. Guitarist Jake Sanders took a central frontman position for most of the set, and Dalton Ridenhour, was situated down on the floor, his piano in front of the stage. There was an Italian number featuring three mandolins (multi-instrumentalism is a requirement for the Lovesick), and a pair of train- tootin' fiddles were featured on "Memphis Shakedown" (the old Memphis Jug Band ditty). Pretty soon, this combo will be making their mark on the NYC scene, and way beyond.

The Hayrollers were gathered around a central microphone, in the Parish Hall, vocally harmonising with guitar, bass, mandolin, fiddle and banjo, a highlight stretch involving a sparring session between these last two, taken at a tearaway pace.

For the 9.30pm Saturday set, Kashiah Hunter's Atlanta sacred steel ensemble lifted the crowd to a special place, illustrating how restrained most of the day's performances had been. Even though fine music had been heard many times, it was Hunter that injected a) spiritual lift, and b) da funk. Opening with a smoothie soul flotation, oozing and soothing, the twinned pedal steel soloists worked with guitar, bass and drums to stew up a funky gospel release, "Walk With Me" getting into a rockin' jam-exchange of solos, deep bass line intensifying. This was chased by the boogie woogie rollin' of "Don't Let The Devil Ride."

Jazz took over the end of the evening, with Brain Cloud again featuring Dennis Lichtman, along with singer Tamar Korn. They've been playing a Monday night residency at the wondrous Barbès bar in Park Slope for nigh on a decade, and before that they were installed at Banjo Jim's, that great lost joint in Alphabet City. Brain Cloud provide the reveller with one of the prime regular roosts in NYC, and this festival set condensed most of their Western swing and general old timey jazz moves into a compact and heady rush. The mood was emphatically extended straight afterwards by The Big Dixie Swingers, from down in New Orleans, smokin' up some more hardcore jazz chestnuts. Meanwhile, the competition on the Parish stage ran through Frankie Sunswept & The Sunwrays (probably the least rootsy act of the weekend, presenting a retro-kool-kitsch tidy-garage pop-rock), Ska-lopy Brass (Jalopy's in-house Jamaican bounce band) and The Four O'Clock Flowers (a real mulch of 1960s-pilfered accessibility). By darting from one stage to the other, a stylistic kaleidoscope could be shaken.

A rest was needed before Sunday, but its programme still began relatively early, at 2pm. Jim Kweskin played "Stealin' Stealin,'" as popularised by the Memphis Jug Band, starting the afternoon off perfectly, singing and swapping from guitar to banjo, garnering a hearty singalong from the already swollen pews, harmonics ringing right up to the church rafters. An early highlight of this day!

Baby Gramps is an unusual bluesman, veering close to being a bushily be-whiskered, porch-squattin' comedy act, but still pretty rough and downhome in his country chuggin.' He has a deep growl, down in the Tuvan throat-singing depths, though much of the Gramps set tended towards slackness, lacking drive. "The Monkey Puzzle Stomp" was one of his better songs.

The 'headline' act of the early evening was a trio of Bruce Molsky (fiddle), Tony Trischka (banjo) and Michael Daves (guitar), the latter being lesser-known, but still quite high profile on the local NYC scene. Gathered closely around the microphone, they emanated a strong force for good, expressive and outgoing, projecting much more than most bands. Molsky could sometimes switch to banjo, creating a fresh combination, and on "The Fox Chase," Trischka had penned a fast rattle of words to challenge the speed-skills of singer Daves, who even managed to top this pace during a syllable-twisting ditty that seemed to be titled "Drunk In The House," concluding the set in exhilarating fashion.

As the weekend hordes thinned out somewhat, Sunday evening took on a quality of experimentation, with Anna Roberts-Gevalt (of Anna & Elizabeth) exploring folk as performance art. She was assisted by a fellow multi-instrumentalist, the pair of them shaping a double melodica space, then Anna started singing, and playing guitar, making a startling abstract impression, incorporating banjo folksong into ambient hoverspace. She ceremonially washed her hands and forearms in a silver metal bowl, then sang a capella, finishing by washing her face, and turning on a laptop layering. Electrocution did not feature! Amusingly, there were watery sounds delivered via digital means, which she coloured with a fiddle tune. Examples of such rustic-ambient fusions are extremely scarce. Anna's set was as much ritual as song, half visual, half sonic, ending with a slow inching up the aisle towards her playing partner, who had emerged at the back, softly blowing through his tenor saxophone, a melody with a Scottish flair. They passed each other, and continued on their ways.