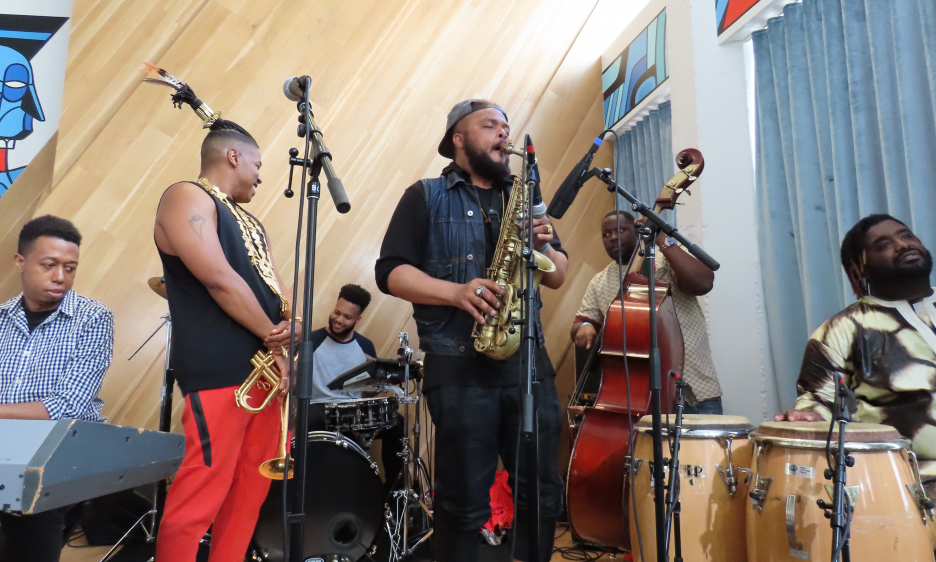 I am a person that feels that the tradition is to constantly look for new terrain and new vernacular... When I actually look at the history of [jazz], that’s what I see.
&#151Christian Scott aTunde Adjuah

While his band played "Songs She Never Heard," a piece from his 2019 album Ancestral Recall, Christian Scott aTunde Adjuah2 paced across the stage, shaking a steady groove on his tambourine. When he stopped to lean over pianist Lawrence Fields, Fields looked over his shoulder and smiled back at him. Then Scott grooved over to Weedie Braimah, who beamed while pounding propulsive rhythms on his djembes.

Although he often put aside his signature trumpet, Scott constantly positioned himself as an authority figure on stage, singling out individual members of his band and communicating through aural directions or facial expressions. But his collaborative leadership constantly allowed the band to make dramatic statements through ferocious solos while Scott stood back and let the music unfold. This dynamic is a perfect example of Scott's message of unity through music, which he brought to Oakland's Bandcamp Record Store on June 27 in a free "secret show" orchestrated through a mailing list.

Scott, an Edison Award winner and two-time Grammy nominee, expressed his thanks on stage for the chance to perform at Bandcamp, calling the store and platform "the coolest place to be in the music industry, period." In an interview with All About Jazz after the show, Scott called this performance particularly special compared to other small shows because of Bandcamp's effectiveness, especially compared to other platforms he has seen rise and fall in his almost 23 years professional musicianship. "I was selling records before Napster and iTunes," he said. "I have seen a lot of different environments, but a model like this can actually change the industry."

The Bandcamp Record Store provides fairly modest performance space, with only a small stage in the corner. Before the show, chatter filled the store as a small but diverse group of young and old fans stood shoulder to shoulder, some looking over the minimal shelves of vinyl records for sale while others inspected the turntables set up in nooks against the wall. One small child stood at the front of the crowd, only a foot away from the stage, wearing a colorful set of protective earphones. Scott said that usually the majority of fans at his shows are kids and young adults, and that unlike older audiences, they have a simple hunger for his music. "They are not there because jazz is cool," Scott said. "They are there because they f***ing love the music."

Dominique Sanders' double bass shook the room before Scott and Logan Richardson hit the crowd with the duel trumpet and saxophone melody of the band's first song, "I Own The Night." The audience cheered and applauded after every solo, from Weedie Braimah's djembes and Corey Fonville's blend of acoustic and trap drums, to Scott and Richardson's harsh and frenetic solos that served as the track's centerpiece. While Richardson's solo steadily grew louder and more chaotic, Scott stood still at the center of the stage, shaking his head and grinning.

Fonville's incorporations of electronic drum sounds is an example of "Stretch Music," which Scott called "an attempt at genre-blindness through an actual understanding of the different vernacular and sort of sonic architectural tropes that exist in music." Scott said he does not believe music should be categorized by genre. "Every way that a human being expresses themselves musically is valid because they are valid," Scott said, adding that music within a genre "has to exist in a cannon and a codified set of values that have been created to make sure that it is that." Some jazz traditionalists cannot accept some jazz music as jazz, which Scott called part of the problem with the current generation of jazz. "I am a person that feels that the tradition is to constantly look for new terrain and new vernacular," he said. "When I actually look at the history of the music, that's what I see."

After finishing their second song, the groovy and celebratory "Songs She Never Heard," the band paused for a few minutes while Scott introduced everyone on stage. Some members got surprisingly personal and heartfelt introductions, including pianist Lawrence Fields. Scott described how Fields can work within virtually any musical culture and tradition, and how that reflects his respect and care for those cultures. "He is one of the warmest and kindest people you'll ever meet," Scott said. "And it makes sense that a gift like that is in the hands of a man like him."

Many musicians who have played in Scott's band over the years now have their own thriving groups, and he said the constant experimentation and communication within his band encourages that. "Once musicians are in an environment like that," Scott said. "They are usually unhappy and bored in other ones."

Scott explained that he wrote the last song of the afternoon, "The Last Chieftain," a track from his 2015 album Stretch Music, about his grandfather, who served as chieftain of four separate tribes of African-Native Americans in Louisiana. Scott, who replaced his uncle as chief two years ago, said he learned from his grandfather that "tribe can be the worst thing for you if it creates a deficit in vision." To give an example of conflict derived from tribalism, Scott asked the audience if they had ever seen a group of men talk about the wage gap between men and women. After two people said they had, Scott replied, "We are definitely in the bay right now." The audience laughed while he added, "You guys are actually pretty good."

Scott encouraged the audience to stop allowing others to tell them how to feel about the people around them, and to reject singular narratives for people groups. "Everyone in this room has thousands of stories," he said. "How could a group of millions of people be one story?"

Although his songs often express socially and politically charged messages, Scott said he primarily writes songs to connect to his audience by honestly telling his personal story and portraying relatable human experiences. "You are not this outside agent trying to do something to them," he said. "You are just opening up something that was already in them."

Scott began "The Last Chieftain" by adjusting his microphone, pointing it more directly down the horn of his trumpet before the band drowned the crowd in solemn melodies. Richardson delivered his most intense solo while Scott stood beside him, swaying along as if hit with wave after wave of palpable sound and emotion. Scott adjusted his microphone again, bringing it low and pointing it straight up into his trumpet, then began his solo in hushed and sorrowful whines, practically swallowing the microphone with his horn. As Fonville's drums and Braimah's djembes grew heavier and more chaotic, Scott followed suit, delivering breathless and frantic runs and sustained, piercing howls that fixated the audience.

After the concert had ended, Scott walked around the room and approached everyone who stuck around a few minutes after the concert ended, shook their hands, made sure he had learned their names and, more often than not, gave them a giant hug. Scott began the show by connecting and communicating with his band, and ended it by doing the same with his fans.