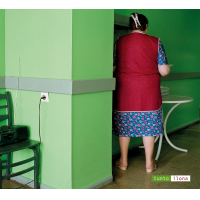 The latest album from Matti Wallenius and Tunto is again primarily centered on his melodious guitar work and the quirky tunes that he and his long-standing reedist Petri Heimonen have come up with. They are all rambling journeys down exotic paths (here often Hispanic or Arabic) where a rich palette of earthy acoustic rhythms are wound together behind the riffs of Wassenius's guitar, multifarious stringed instruments, and various accompanying reeds.

Ilona has to be seen as part of the canon that Wallenius has created with Heimonen under the aegis of Tunto. This is their fifth offering, and all sail rather close to being classified as 'easy listening,' as well as a type of ethnic folk-jazz. This is not to deride either genre, since there is obviously a place for lighter shades of jazz, and all Tunto albums are exquisitely recorded and presented. "Ilona," apart from the female name, is something of a play on the Finnish for 'joy' (ilo) and the album's cover photo figure may be the inspiration for the name, although the title may be Wallenius' s play on the concept of hidden treasures or pleasures. (All their albums feature somewhere the band's name printed in braille text, which is certainly suggestive!) The album has superb clarity and a rich array of timbres, from the laconic sauntering bass, often picked up by the bass clarinet, but it does feel as if the composer has not stepped out of his comfort zone on this album. Or maybe he just knows what he does well!

So, after initial pleasure at seeing Wassenius and company back on the sales counter, there is slight regret that they don't seem to have discovered any new formula to entertain listeners. That said, Ilona is as good a starting point to Wassenius's own dark, laconic, Scandinavian humor as the previous albums. The tunes bounce and tumble in a constant flow of polyrhythms and deft textures, occasional abrupt reorientations, and a perpetual flow of quirky acoustic tweeks.

The stark cover picture could be from an Aki Kaurismäki film, which would suit the humor of the title tracks, so it's a pity that the liner notes are minimalistic. Is Ilona a mythic figure from somewhere exotic, south or east? Or is she the colorful housefrau of the cover, worn down by domestic duties but indulging in gentle daydreams of secret pleasures offscreen? The theme for this album is maybe unimportant; it is sweetly performed, and recommended for burdened AAJ listeners who will be happy to put their feet up, don their slippers and drift away with Tunto's gentle polyphonic rhythms, taking them somewhere indefinable, probably south and or east!