BY NENAD GEORGIEVSKI
July 4, 2016
Sign in to view read count 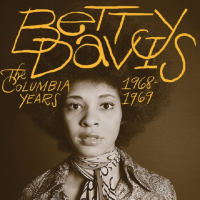 The vaults of major labels such as Columbia and many others hold many secret and yet to be revealed gems. First of all, check out singer-songwriter Bob Dylan's archival Bootleg output series or trumpet legend Miles Davis archival box set reissues. This isn't just scraping the bottom of a barrel and coming out with alternate takes or rehearsals of songs or music with dubious audio quality, but an avalanche of unbelievable amount of great music, much to the joy of their fans and music historians and collectors. And these vaults contain massive troves of unreleased music and sometimes shelved albums. The same thing can be said about major artists such as singers Bruce Springsteen or Prince, who is probably the leading champion of shelved projects.

Seeing the light of the day for the first time after almost 50 years sitting in the vaults, The Columbia Years 1968-1969 by singer Betty Davis is like excavating a relic of tremendous importance. The importance comes not only because she was Miles Davis' wife when these recordings were made, but also because these sessions were done during Miles' transitory periods when he was transiting from the works with his Second Great Quintet into his Electric period. Interestingly, while many shelved albums and rehearsals have found their ways to audiences as low-quality bootlegs, these much-rumored recordings have never leaked into the bootleg circles and were virtually unknown.

Much has been talked about the influence of Betty Davis over her husband. At the time, during the '60s, she was a trendsetter, a socialite, a model, a manager of a rock club and an aspiring soul singer. She was hanging out with top stars of the rock world, most notably guitarist Jimi Hendrix. The pair married in September 1968 and while their marriage lasted more than a year, her influence over his listening tastes and wardrobe choice lasted little longer and were far reaching. Firstly, he put her photograph, although an obscured one, on the cover of Files de Kilimanjaro (Columbia, 1968) and devoted a track to her "Mademoiselle Mabry (Miss Mabry)." Soon his listening tastes reflected hers as she exposed him to various pop, funk and rock musicians which influences soon began to show up in his music.

As said in the title, the sessions on this record happened in '68 and '69 and were produced by different producers and featured different line-ups. These songs here are rough mixes and demos, as they were used as a template for fishing out a record deal which sadly never materialized, and yet, even today they sound so full of life and brim with ideas. Apart from a few covers of songs by rock bands of the day, such as Cream and Credence Clearwater Revival, the remaining songs were written by Betty Davis. The result of all this upheaval?

Most of the record consists of sessions from 1969 that was produced by Miles Davis and Teo Macero. These sessions happened in between Miles' two iconic records, In a Silent Way (Columbia 1969) and Bitches Brew, (Columbia, 1970) and featured a plethora of artists such as keyboardists Larry Young, Herbie Hancock, saxophonist Wayne Shorter, guitarist John McLaughlin who have made these two records iconic. Not only that, it also featured Jimi Hendrix's Band of Gypsies rhythm section, bassist Billy Cox and drummer Mitch Mitchell. Driven by this steamrolling tandem of a rhythm section and an electrifying squad of outstanding musicians the music from these sessions is full of many positives.

The sound quality is truly great for tapes that were gathering dust for 50 years, although a little raw and unpolished, but under the direction of its duo of producers it has the same softness and sonic blueprint as the famed In a Silent Way/Bitches Brew period. But unlike Miles' music from this period which is characterized by lengthy improv jams spiked by popular music of the day, Betty Davis' music on these sessions are funky soul songs that radiate with sticky and playful grooves, funky guitars bolstered and led by Betty's sultry voice. While the music is straight out of the Sly Stone/Hendrix approach, the band's execution puts a modern stamp on it. All the more impressive is that the different groups are able to strut their stuff as they blend into an unstoppable force. The opening "Hanging Out" is a boogaloo driven by a laid back funky groove and with an elegant, minimal, but utterly brilliant funky guitar. John McLaughlin's fingers are flying all over the place but are never outside the reach of the rhythm section.

The second track is a song written by Cream, which legendary rhythm section has played not so long ago with McLaughlin as part of the Graham Bond Organization. It's an urgent rocker with ominous guitar lines. His playing is bluesy, economical and reserved. Ironically, even he will face the same fate just a few years ahead when at the height of the popularity of Mahavishnu Orchestra, a studio album will be shelved due to inner band friction. Eventually, it will be unearthed a few decades later as The Lost Trident Sessions.

"Down Home Girl" increases the tempo and it is soon transformed into a funky soul tune. Infectious and powerful, the groove is soulful, inviting and warm while the guitar licks come from the bottom of the soul-bluesy-funk bag. On the two takes of "I'm Ready Willing & Able," she sings with a laid-back swagger, assurance, and raucous energy. Although the last three songs were produced by a different producer still there is a cohesion here. Complimented by a brass section, as she is backed by trumpeter Hugh Masekela and the Jazz Crusaders, Miles' songs both soar and swing. "It's My Life" will get you up out of your seat moving and grooving while "Live, Love, Learn" is a gentle love song that slows the tempo. The closing "My Soul is Tired" with its urgent and pressing groove, is full of intense energy that rumbles through the song and closes the album like an eruption.

If going through this collection song by song, it would be truly hard to find any throwaways here. Columbia Years 1968-1969 is obviously a labor of love both for Betty Davis (and her husband whose jovial mood can be felt during the studio chatter at the end of some of the songs). This collection is an important historical find and it is also an invaluable archive for both the jazz and funk listening public.