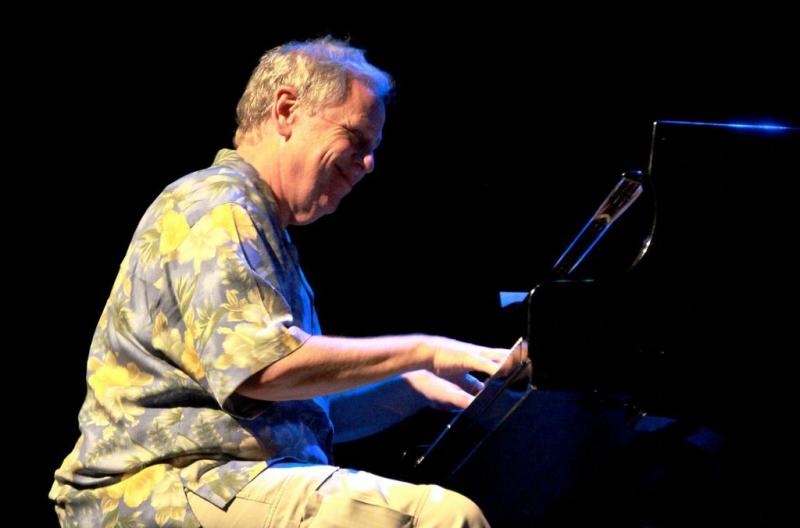 For such a small country, perched on the Western extreme of Europe, Ireland has created a disproportionate amount of history, and had more than its fair share thrust upon it. Everywhere, history informs the landscape and the collective memory. Sligo, home to the Sligo Jazz Project is no exception. Megalithic stones—tombs of the ancients—dot the land, and the tombs of Spanish Armada ships and their ghosts lie at the bottom of the sea.

Walking from venue to venue around this old town, from workshop to jam session and gig, the voice of poet William Butler Yeats echoes in the narrow streets; bookshop windows proudly display anthologies of his collected poems, while streets, accommodation blocks, pubs, museums and societies are named in his honor. There's also a lively trade in tea-towels, coffee mugs, and glass and stone inscribed with his verse.

Beside St Edwards primary school—where 85 students from around 20 countries gathered to attend a week of workshops given by some of the world's premier jazz musicians/educators—stands Sligo's Famine Graveyard, an understated monument to the estimated 1 million Irish who perished in the Great Famine of 1845—1852. Hundreds of thousands more abandoned Ireland in the following decades, many heading to North America and the strong historical ties linking the two countries were evidenced at the SJP by the picture of President Barack Obama above the whiteboard in one of the classes.

Claiming approximately 4% Irish blood—and there are living relatives in Moneygall to prove it, even if there's no marked physical resemblance—Obama visited Ireland in 2011 and the photo bears beneath it the legend Obama spoke in Gaelic: Is Feidir Linn—which translates as "Yes, we can." It's an appropriate call to arms for primary school children and no less inspiring for the students in Sligo's jazz summer school, where students of varying ages and abilities came to learn, to improve their existing skills and knowledge and, perhaps most importantly, to come away with increased confidence and renewed motivation.

These were, and have always been, the main aims of the SJP since its inception in 2005, but there's more to it than the school. Daily jam sessions in the restaurant/bar space of Source Sligo provided a small-combo laboratory for students to work through new skills and knowledge in a public setting. In the evenings, a jazz festival program in the Hawk's Well Theatre hosted an outstanding array of international musicians, nearly all whom were tutors in the SJP.

The faculty of SJP 2013 boasted the participation of pianists Kenny Werner and Phil Ware, drummers John Riley and Steve Davis, trombonist Marshall Gilkes, saxophonists Jean Toussaint, and Linley Hamilton, double bassist John Goldsby, electric bassist Janek Gwizdala, guitarist Mike Nielsen and singer Ian Shaw. No wonder then, that the students who arrived at St. Edwards school on Tuesday morning were keen to learn who would be tutoring them in small ensembles for the duration of the week.

As the students mingled and acquaintances were made, the swell of voices created a happy cacophony like an orchestra tuning up. A fair few students were returning to SJP for the second or third time, which was also the case for several of the tutors. Mayo-based drummer Martin was back at the SJP for the third consecutive year, drawn each time by the opportunity of studying with John Riley.

Beginning with bandleader Woody Herman in the mid 1970s, Riley has kept time for iconic jazz figures including trumpeters Miles Davis and Dizzy Gillespie, vibraphonist Milt Jackson, saxophonists Stan Getz and Joe Lovano and guitarists John Scofield and Mike Stern—the latter who was opening the evening festival program: "I think that's why people come back every year," said Martin, "because of the quality of the tutors and because there's no pressure at all." In fact, a spirit of bonhomie and mutual support was a constant feature of the SJP.

After a brief welcome from SJP founder and director, Eddie Lee, which included an introduction to the faculty staff, the students made their way to the first ensemble classes. Soon after, the school was buzzing with music, talk and laughter. The ensembles typically ranged from quintet to septet in size and the participants from 12 years of age to 70.

Age at either end of the scale is no barrier to joining the SJP as the ensembles are grouped according to levels of ability. In fact, the three youngest students, Thomas Maxwell (12), Charlotte Kinsella (13) and Emmett Harrison (13) provided some of the most inspiring stories of the week.

The first master class brought together two bassists from essentially different backgrounds; John Goldsby and Janek Gwizdala presented "Integrated Ways of Practicing." Together they demonstrated that no matter whether you plug your bass in or hold it upright, the fundamental building blocks to learning and the discipline required to master your instrument are the same.

"Eighty percent of my technique I learned through watching gigs every night of the week," said Gwizdala. "It's a super important element of all of this." Goldsby nodded in agreement. When he started out in earnest in Louisville at the end of the 1970s there was no You Tube nor were there the same opportunities to go to jazz school that exist today. Goldsby learned the ropes by playing with the likes of clarinetist Buddy DeFranco, guitarist Barney Kessel, pianist Jay McShann and singer Johnny Hartman—old-style schooling. Goldsby concurred with Gwizdala: "It's so important to be inspired by the music you're working on," he said "and by the people themselves."

Following a delightful duo recital of "Alone Together" a student asked Gwizdala how much of what he had just played was memorized phrasing or licks: "One of the things I learned at Berklee was not to think when playing," answered Gwizdala. "Can you remember the last time you used the words 'and,' 'if' or 'but'? Of course, I've learned every single note and combination of notes, but I wasn't thinking while I was playing." Having demonstrated playing over changes, Goldsby subsequently observed: "Playing changes is like going for a jog. There are a dozen different ways to get back to your house."

Both musicians stressed the importance of playing with other musicians as a learning strategy, and what was evident in some of the students, certainly at the start of the week was a degree of self absorption in their playing to such an extent that many would forego eye contact with their fellow musicians. Poor communication, with all the consequent pitfalls it brings, was particularly noticeable in some when it came time to hand over a solo.

Goldsby explained that for him a good gig is not about playing like a demon but about listening closely and hearing all the other players: "I'm a musician who happens to play the bass," he said. The two bassists agreed that when it comes to practice it's important to do so within restricted parameters and to bring focus to the practice.

On playing fast, Goldsby recommended keeping a straight wrist at all times and switching between one and two fingers on the upright bass to avoid the hand becoming exhausted. One student asked what to do if the drummer or keyboard player leaves you alone when it's your turn to solo, and judging by Gwizalda's animated response it was clear that such behavior is akin to walking away from someone when they're talking to you. You don't do it.

What was immediately noticeable about Gwizalda's playing was that it was constantly accompanied by wordless singing. He advised students to record themselves singing and to listen to it for ear training. For Gwizalda, singing with his bass lines is one and the same thing: "The music comes from here," he said, tapping his head, "not from here" he said wiggling his fingers. "If I play a two-hour set I come off the stage with absolutely no voice."

The bottom line, Goldsby and Gwizdala agreed, is practice: "It's hours and hours of practice," said Gwizalda. "What am I saying? It's years of practice," he quickly auto corrected. "I'm 17 years making this music as a professional and I'm still learning. I'm continually updating my mental software."

For the two hours of the workshop not a single note came from the dozen or so bass guitar students present. There are clearly times, and all present were acutely aware of this, that one can learn most by listening. Goldsby also told students not to beat themselves up if they think they don't sound so great, but also not to bask in self-approval: "You observe what you're doing," he said, "but you don't judge it." After the workshop one of the bass students commented on how useful the session had been: "It gives you confidence to have your ideas confirmed," he told me.

Confidence was, understandably, not in great supply in the first, post-lunch ensemble classes, where tutors guided the students through a selection of songs—standards in the main. The students stayed with the same tutor for the duration of the week, practicing several compositions. The afternoon jam sessions in the center of Sligo gave gig experience, leading up to the students' gala performances on the final day of the week.

For nearly all these students it was the first time they'd played together. Nine students received the special attention of saxophonist Jean Toussaint. A former member of drummer Art Blakey's Jazz Messengers between 1982 and 1986, Toussaint has an extensive discography as a leader in his own right and has toured with bebop/hard bop jazz legends such as drummer Max Roach and pianist Horace Silver. Toussaint, however, has many strings to his bow, and also performs with the culturally and stylistically diverse ensemble Shiva Nova. Led by keyboardist/composer Priti Paintal, this rather unique ensemble was described by The Times as " a victory for musicianship and vision."

For the first few days this student ensemble was without a drummer, which meant that internalizing the time assumed even greater importance: "When you make a statement you want it to have conviction," said Toussaint, "and the rhythm is conviction." Several standards got a workout, but it was trumpeter Miles Davis' "So What" from Kind of Blue (Columbia, 1959) that caused most problems.

Though seemingly simple when broken down into its constituent parts, the students repeatedly made mistakes at the outset, confused between what they thought were the correct notes and the actual notes: "The mind plays tricks," said Toussaint smiling knowingly. "That's why it's so important to listen closely." As a remedy, Toussaint led the ensemble through a vocal call and response, one that recalled bandleader Cab Calloway's band. Even with some obviously talented musicians in the ensemble it was going to take time for everybody to gel; the challenges for both students and tutors were abundantly clear from day one.