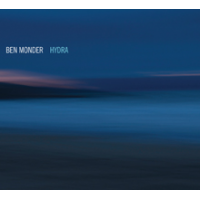 New York-based guitarist Ben Monder has been an active member of the contemporary jazz scene for more than two decades, appearing on over 100 sessions as a sideman for such luminaries as Paul Motian, Maria Schneider and Kenny Wheeler. Despite such prestigious collaborations, Monder has maintained a relatively low profile as a solo artist, with less than half a dozen records as a leader or co-leader to his credit; Oceana, the last release under his own name, was issued by Sunnyside Records back in 2005.

When left to his own devices, Monder unveils a singular penchant for juxtaposing progressive rock tenets with the atmospheric textures of ambient music. An heir apparent to edgy but ethereal stylists like John Abercrombie and Bill Frisell, Monder's unorthodox approach has earned him widespread critical acclaim and the admiration of his peers, yet widespread popularity continues to elude him. Performing regularly with his trio, quartet and in duets with vocalist Theo Bleckmann, Monder has nonetheless established a uniquely identifiable aesthetic in his own ensembles, alternating between dreamy soundscapes and visceral abstraction.

Thematically similar to Oceana in its dramatic ebb and flow, Hydra takes up where Monder's previous effort as a bandleader left off. Indicative of his idiosyncratic artistry, Monder once again shares the frontline with Bleckmann, whose sonorous vocalese alternately complements or contrasts with the guitarist's multifaceted technique, which spans the spectrum from delicate finger-picking to scorching over-driven leads. The primary rhythm section consists of bassist John Patitucci and longstanding drummer Ted Poor (bassist Skuli Sverrisson subs on two cuts), with Gian Slater and Martha Cluver providing occasional harmony vocals.

The serene opener "Elysium" and penultimate "Postlude" serve as meditative bookends, leaving the epic title track to reveal the depths of Monder's quixotic predilections within the context of an elaborate musical narrative. Encompassing an array of stylistic changes in just under half an hour, the titular opus illuminates the group's skillful rapport, largely in support of the leader's virtuosic excursions, which include neo-classical arpeggios, quicksilver chromatic runs and sweeping intervallic leaps. Accompanied by Bleckmann's heavenly refrains, the trio's adroit interplay repeatedly modulates in intensity and complexity—conceptually evoking the regenerative nature of the work's namesake.