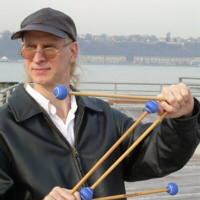 Latin jazz doesn't get any better than this.
—Mark Sullivan, All About Jazz

Vibraphonist and composer Mike Freeman has been a part of the New York jazz and Latin music scene for a day or two. Dan McClaneghan of Allaboutjazz described him as "masterful" and ranked among other top names of the instrument. With spirited soulful swing, Freeman's performances have taken him from North America and Europe to the Azores, Caribbean, and South America. His recordings of original music include tributes to Cal Tjader, Tito Puente, and NEA Jazz Master Bobby Hutcherson. Freeman's recordings have received national and international attention and extensive radio airplay, charting on jazz, contemporary jazz, and World Music radio.

Other endeavors include writing a decade-long series of commissioned compositions and arrangements for the Chicago Symphony Orchestra’s Percussion Scholarship Program. In 2014 he was commissioned by the late drummer/educator Ed Uribe to write arrangements for China's national percussion curriculum that were performed by members of the Shanghai Symphony at Shanghai Symphony Hall.

Performance highlights for Freeman as a leader include the Fox Jazz Festival and Riverfront Jazz Festival in WI; the Trinidad & Tobago Steelpan & Jazz Festival; Festival Internacional, Terciera, Azores; Central Park’s Harlem Meer concert series in New York City; performing for Flood Relief in Des Moines, IA; Jazz on the Green in Omaha, NE; the Berks, Rehoboth Beach, Hennessy Greenwich Village, and JVC Newport (at Saratoga) jazz festivals; the International Association of Jazz Educators (IAJE) convention, and an extensive tour of Portugal, cosponsored by the Fulbright Foundation and the American Embassy (USIA), where he received the Medal of the City of Guarda.

Freeman is also known for his work and recordings with several acclaimed Latin groups. The vibes behind the name, he worked extensively with legendary percussionist Ray Mantilla’s Good Vibrations Band (touring much of Italy), Ray's Tres Amigos, and as a regular guest with Space Station.

"Good Vibrations,” Savant Records, was Jazzweek's top Latinjazz recording on radio in 2006. Freeman is also featured on Ray’s final two recordings “High Voltage,” and "Rebirth" both on Savant. He was part of Lucho Cueto’s all-star group Black Sugar, “Estamos Azucar," which gave blockbuster performances for thousands at the Toros Y Salsa Festival in Dax, France, and at the Festival Internacional de Salsa in Lima, Peru. For eighteen years he's been a mainstay of Jose Mangual Jr.’s Son Boricua featuring the late Jimmy Sabater (one of the architects of Boogaloo) that performed for large gatherings at salsa congresses in New York, L.A., and Atlanta. His vibe work can also be heard with Mark Holen’s eclectic Latin blues band Zambomba. In the 1990s he created the book for, and performed with, Jorge Jimenez’s salsa group Timba Vibes. This was followed by a twenty-year association with salsa singer Julio Salgado. He performed with the Spanish Harlem Orchestra (directed by Oscar Hernandez) at Madison Square Garden and with Willie Villegas's Joe Cuba Sextet for New Jersey's salsa congress, both with legendary sonero Cheo Feliciano.

Focusing the Spotlight: A Little More About Mike Freeman

"Latin jazz doesn't get any better than this" –Mark Sullivan, All About Jazz

"…Freeman is wildly talented on the vibraphone" –Mike Greenblatt, Classicalite

"brilliantly played…" "The music cooks; it burns; it swings…" – Steven A. Cerra, JazzProfiles

"Latin jazz doesn't get any better than this" –Mark Sullivan, All About Jazz

"…Freeman is wildly talented on the vibraphone" –Mike Greenblatt, Classicalite

"brilliantly played…" "The music cooks; it burns; it swings…" – Steven A. Cerra, JazzProfiles

The Vibraphone in Latinjazz and Salsa.

All About Jazz musician pages are maintained by musicians, publicists and trusted members like you. Interested? Tell us why you would like to improve the Mike Freeman musician page.