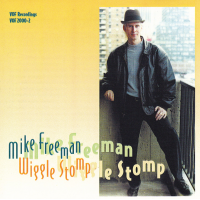 Mike Freeman's second self-produced album features a program of his compositions. The underlying theme is Latin and Brazilian jazz and calypso. Freeman not only plays the vibes, but the marimba as well, the latter reserved for the calypso music. If the picture on the album is accurate, Freeman uses the four mallets getting a voicing that is more defined and not as resonant as other practitioners of that technique.

The musical program is one of contrasts. A pensive, haunting "Rain" with Freeman's vibes and the Ernie Waits like tenor sax of Dave Peterson harmonically intertwining with bassist Harvie Swartz traipsing in and out of the melody line to provide effective counterpoint to the two main players which makes this a very attractive track. On a slightly negative side, there is an element of seamless music, known as smooth jazz, built into some of the work which some may find wearing. Absent dynamics and the unrelenting, unchanging beat of drummer Ed Uribe on such tunes as "Jasper" can be tedious. But this scenario changes with a bang on an exciting, driving calypso piece, "Glow Fuel." To accommodate and attract Generation Xer's, "Last Wave" incorporates some of the recording scratching employed by the Rappers.

Wiggle Stomp has achieved considerable public acclaim. It made the Gavin jazz radio charts and the Gavin Adult Alternative charts. It's the last piece of information that may make some jazz fans hesitate before picking up the CD. But unlike most albums falling into that category, Freeman's undertaking has flair for melodic creativity, colorful instrumentation, and rhythmic bounce which when combined with the South of the Border rhythms, make this an attractive addition to the collection.