BY DAN MCCLENAGHAN
April 24, 2012
Sign in to view read count 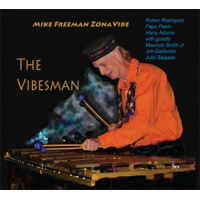 The sound of the vibraphone glows—a ringing and sustained sonic luminescence. Current masters of the instrument include Gary Burton, Joe Locke, Bobby Hutcherson, and the perhaps lesser-known but also masterful Mike Freeman.

With his percussion-soaked group Zonavibe—that includes, besides the vibes, the sounds of marimba, and kalimba, congas, bongos, campana and timbales—Freeman stirs up a multicultural brew of vibrant optimism and Latin and world jazz grooves. Tenor sax and flute, steeped in an organized rhythmic clamor on the livelier numbers and a burbling percolation on the smoother tunes, front the ensemble on alternating tunes.

On previous recordings, Freeman has used the vibes and marimba as his main voices. He branches out here by including a wood flute and a kalimba (African thumb piano) in his arsenal on "Sahara Sunrise," extending the reach of the world grooves in his music. "Drifting" brings a cool-flowing Brazilian vibe to the mix that flows around Maurico Smith, Jr.'s flute work, and "Vibe Descarga" adds some Latin sauce to the set.

The Vibesman closes with "Vibe Descarga Y Voz," some party time salsa featuring Julio Salgado on vocals, dancing off into the night and nicely wrapping up an ebullient and often rousing set.